A victory on Vine Street amid worries about Trump’s budget 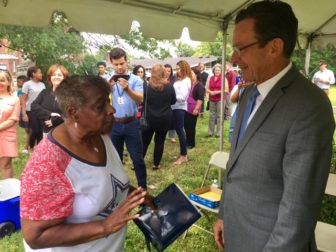 The mayor spoke first, then the governor. Florence Villano, executive director of the Connecticut Housing Coalition, teased she had saved the best for last. That was the cue for Hattie Harris. She took a last glance at her typed notes, then slowly rose from a folding chair.

The event Friday ostensibly was a celebration of nine buildings saved from the pull of neglect, disinvestment and decay on Vine Street in Hartford’s North End where Harris — Miss Hattie to some, Mama Hattie to others — has lived since the president was a Republican first-time office holder named Dwight D. Eisenhower.

Gov. Dannel P. Malloy had talked about the impact of $6 billion in cuts to the budget of the Department of Housing and Urban Development on Connecticut’s ability to keep up with chronic homelessness, a problem that can be managed, not solved.

Mayor Luke Bronin talked about the small miracle of Vine Street, how an alchemist’s mix of federal and private dollars, state and federal tax credits can rescue a long block of 1920s residential elegance across the street from the historical Horace Bushnell Church, a congregationalist landmark repurposed by a Pentecostal minister.

She was 70 when she confronted a drug dealer at 3 a.m. That was in 2005, the year when a teenaged boy was shot to death on Vine, when the street regularly made headlines, all of the bad kind. That was the year the wind whistled through a bullet hole in her window.

On Friday, she spoke at a lectern on a neatly mowed lawn under the shade of the white pavilion tent erected in a vacant lot. The fight now is about money — money for HUD, a federal agency that spent $366 million in fiscal 2016 on Section 8 rental subsidies in Connecticut, $44.5 million on grants to fight homelessness and a billion dollars in FHA mortgage insurance.

Gov. Dannel P. Malloy, Mayor Luke Bronin and the other two dozen people under the white tent applauded for Hattie Harris. She confessed a bout of nerves to a friend, Bernadine Silvers, who rolled her eyes. Silvers doesn’t see Harris as the nervous type.

Malloy said Trump’s proposed cuts are a puzzle. Many would deplete programs that now leverage private funds and bring sheetrock, fresh paint, doors and windows to places like the 74 apartments in nine buildings across the street. Many had been boarded up and vacant, except for squatters and drug dealers.

They were bought in 2013 by a non-profit housing developer, Sheldon Oak, and rehabbed. One of them is now home to Miss Hattie.

Harris recalled the bad times, when men like Brother Carl Hardrick set up tents in the vacant lot, an encampment for volunteers who stood watch. She said she was offered a move to a new apartment just a few weeks ago, an offer that holds no appeal.

Vine Street is safe now; it is home.

She said, “There is always someone calling,’Miss Hattie, Mama Hattie, are you all right?’”

Harris said she and Vine Street are all right. The annual block party is next month. Bronin said it’s become a must-see community event. Harris invited Malloy to come.