Even with Obamacare’s survival, a shakeup in CT healthcare system threatens

Washington – Even though the U.S. Senate failed to repeal the Affordable Care Act, there will potentially be changes to Connecticut’s health care system that may affect tens of thousands of state residents.

Depending on what the president and his administration decide in coming days, some people may lose subsidies that would help pay their premiums, co-pays and deductibles next year. Others could see sizable increases in their  premiums and perhaps a smaller choice of plans pending the outcome of decisions yet to be made by Connecticut insurers.

Those potentially affected would be people who don’t receive health coverage from their employer or a government-run plan like Medicaid or Medicare but who purchase insurance in the individual market. That’s about 7 to 10 percent of those with health insurance in Connecticut.

Over the weekend, President Donald Trump tweeted, “If a new HealthCare Bill is not approved quickly, BAILOUTS for Insurance Companies and BAILOUTS for Members of Congress will end very soon!”

What the president meant is that monthly cost-sharing reduction payments to insurers — payments that shrink out-of -pocket expenses for those who purchase “silver” plans on Connecticut’s Access Health CT exchange — would end.

Nearly 48,000 Connecticut residents benefit from the cost-sharing reduction (CSR) program, which subsidizes co-payments and deductibles for individuals and families who earn less than 250 percent of the federal poverty level.

The president’s threat to end CSR payments might prompt Connecticut’s two remaining insurers to quit Access Health CT. Those insurers – Anthem and ConnectiCare – said the continuation of the payments will be a factor in their decisions whether to remain in the exchange.

If both insurers leave Access Health CT, about 74,000 Connecticut residents whose monthly premiums are subsidized by the federal government would lose that help.

On Monday, the president kept up his assault.

“If ObamaCare is hurting people, & it is, why shouldn’t it hurt the insurance companies & why should Congress not be paying what public pays?” Trump tweeted.

Democrats say statements like this from the White House are aimed at “sabotaging” the ACA and adding more instability to the marketplace at a time insurers are fleeing the exchanges and seeking huge premium increases.

“As we work toward bipartisan solutions, President Trump should immediately halt all efforts to sabotage insurance markets for political purposes,” Gov. Dannel Malloy said in a statement last week as head of the Democratic Governors Association.

Ron Palumbo, an attorney in New Haven, does not benefit from subsidies that lower the cost of his deductibles nor does he receive federal help to pay for his health insurance premiums. But the ACA was implemented just in time for him, he says.

Palumbo and his daughter, who was born with cerebral palsy, were for years insured under the health insurance policy his wife had at work.

But when his wife quit her job, the family scrambled to obtain coverage.

For a while, Palumbo was able to keep the family covered under a federal law known as COBRA that allowed the family to extend the coverage offered by his wife’s former employer if they paid the full cost of the monthly premium, about $1,400. When their COBRA period expired, Palumbo said it was tough to find a policy that would insure his daughter, who has a pre-existing condition, and his wife, who had been treated for a bout of post-partum depression. He applied for a policy on the individual insurance market, but the insurers refused to cover his wife.

“The cost for only my daughter and I was almost $4,000 per month and nothing for my wife,” he said.

When Access Health CT was established in 2014, insurance brokers urged Palumbo to apply for coverage through the exchange.

Although he gets no help in paying for it, he says he’s very happy with the plan he signed up for, even if his premium has jumped over the years.

“Due to our income, we do not qualify for assistance and we were never looking for any,” Palumbo said. “All we wanted was affordable insurance for our family.”

The collapse of Access Health CT would make it harder for Palumbo to find the policy he likes, and expected rate hikes for the 2018 enrollment period would make it more expensive. But if the Affordable Care Act is not repealed, he will be able to find coverage for his wife and daughter because the ACA bars insurers from denying coverage to those with pre-existing conditions. 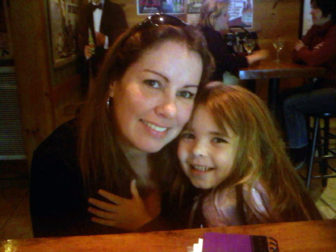 Barbara Granton and her daughter, Stevie.

Barbara Granton, 52, of Southbury has a different story.

Six years ago, when she returned to Connecticut from Canada after her divorce, she struggled to find a job — and health insurance for herself and her 4-year-old daughter.

She found a job at Panera making $9 an hour and qualified for HUSKY, Connecticut’s version of Medicaid.

But when she secured a better-paying job as a contractor/technician, Granton no longer qualified for HUSKY/Medicaid. It is only available to those who earn up to 133 percent of the federal poverty level. That’s about $16,000 annually for an individual and $33,500 for a family of four.

She found out she and her daughter would qualify for a subsidized plan through Access Heath CT, but the premium cost $626 a month and she could only make the payments for a few months.

“I could not afford health insurance on top of paying rent,” she said.

Granton has been uninsured for about two years, and things are not likely to improve for her under the current terms of the Affordable Care Act, with an expected jump in premiums for 2018 and potentially the end of subsidies that would come with the retreat of Anthem and ConnectiCare from Access Health CT.

Happily she recently was hired as a full-time employee for a firm that will provide her with a health insurance benefit.

“We’ll see how long that lasts,” she said. 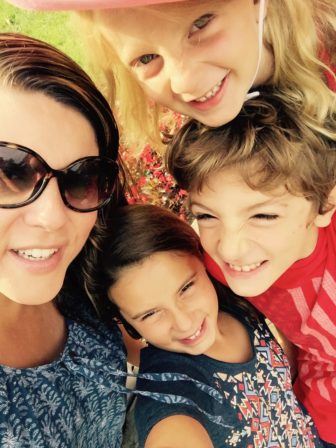 Marilia Jose and her children.

For another single mother, Marilia Jose, 43, of Middlebury, the Affordable Care Act’s expansion of the Medicaid program was a solution to her problem in obtaining insurance coverage.

She and her 10-year-old twins and 6-year-old daughter lost their health insurance coverage when Jose’s husband died unexpectedly about six years ago. She was able to provide health care for  her children under HUSKY B – which covers children in families that earn up to 318 percent of the  federal poverty level or about $62,484 for a family of four.

But Jose  made too much money at her part-time job in the Middlebury-Southbury school district to qualify for HUSKY/Medicaid herself. That changed when the Affordable Care Act allowed Connecticut to expand Medicaid  to adults who earn up to 133 percent of the federal poverty level.

Unless Congress repeals or amends the ACA, that Medicaid expansion will continue in Connecticut, even if Access Health CT insurers withdraw and/or the subsidies to them are discontinued. It has provided health care benefits to more than 220,000 Connecticut residents.

“People can become uninsured very suddenly and programs like Obamacare can be a lifeline,” Jose said.

Trump is expected this week to make a final decision on the CSR payments, and Anthem and ConnectiCare are expected to make their decision whether to stay in Access Health CT by early September.

Those decisions, which could affect tens of thousands of Connecticut residents, will be based in part on whether CSR payments continue, but also on whether the Connecticut Insurance Department approves the companies’ rate hike requests for 2018.

Anthem is seeking an average 33.8 percent increase on plans covering individuals and their families.

ConnectiCare has asked for an average rate hike of 15.2 percent on policies it sells through Access Health CT, where it now covers about 51,000 people, and seeks an average 26.3 percent rate increase on health plans it sells outside Access Health — policies that cover more than 37,000 people.