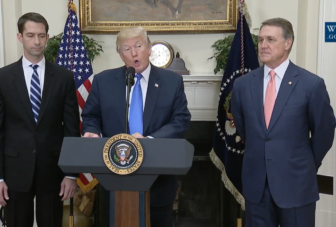 Washington – President Trump’s embrace of a GOP bill that would cut legal immigration to the United States has provoked criticism by labor, business and immigrant advocates who say it would hurt Connecticut’s economy.

Nearly one in every seven Connecticut residents are foreign born, a growing population in the state that would be affected if the GOP Bill, known as the RAISE Act, were ever to become law, which is doubtful since it’s likely to fall far short of the 60 votes it would need to pass the Senate.

“Since 1980, all of the net growth in Connecticut comes from immigration,” said Peter Gioia, an economist with the Connecticut Business & Industry Association. “We would be losing population if it weren’t for immigrants.”

The Trump administration’s embrace of legislation sponsored by Sen. Tom Cotton, R-Ark., and Sonny Perdue, R-Ala., that would nearly halve the number of legal immigrants the United States welcomes each year, was cheered by much of the president’s base, which has been critical of failed GOP attempts to repeal the Affordable Care Act.

“Among those who have been hit hardest in recent years are immigrants and minority workers competing for jobs against brand-new arrivals,” said Trump at the introduction of the bill. “It has not been fair to our people, our citizens and our workers.”

The RAISE Act would cut the number of legal immigrants allowed into the United States each year from more than 1 million to a little more than 500,000, mainly by eliminating green cards granted to siblings, grown children and parents of current immigrants and green-card holders. Currently an overwhelming amount of legal immigration is driven by sponsorship from family members and is not dependent on one’s skills, education or ability to speak English.

The bill would hold steady at about 140,000 the number of green cards based on job skills. Those immigrants would be selected according to a points system that would favor English speakers with higher levels of education and high-paying job offers.

The president’s claim that ending the immigration of unskilled workers in favor of skilled immigrants would help the U.S. economy was disputed by economists, who said cutting legal immigration would constrict the number of workers needed for certain industries, including agriculture, construction and the hospitality industry, while increasing the demand for undocumented immigrants who would take those jobs.

Economist also say a steady stream of immigration is needed to offset the falling U.S. birth rate and keep the economy from contracting.

A group of 1,470 economists sent a letter to the White House that said immigration brings in young workers who help offset the large-scale retirement of baby boomers and “diverse skill sets that keep our workforce flexible, help companies grow, and increase the productivity of American workers.”

“Immigration undoubtedly has economic costs as well, particularly for Americans in certain industries and Americans with lower levels of educational attainment,” the economists wrote. “But the benefits that immigration brings to society far outweigh their costs, and smart immigration policy could better maximize the benefits of immigration while reducing the costs.” 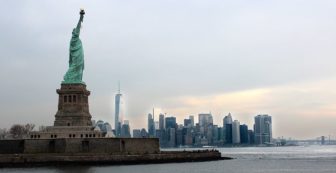 The Statue of Liberty, which has greeted generations of immigrants in New York harbor.

“This offensive plan cutting legal immigration by one half is nothing but a series of nativist talking points and regurgitated campaign rhetoric that completely fails to move our nation forward toward real reform,” Blumenthal said.

The RAISE Act also was panned by a Connecticut labor group.

“President Trump’s immigration levels bill is a hateful gimmick that will hurt our economy, separate hard-working immigrant families and won’t create a single job for working Americans,” said Juan Hernandez, Connecticut District leader of 32BJ Service Employees International Union. “Much like the Trump Administration’s deportation machine, this bill would target the most vulnerable immigrant workers and hurt communities across the country.”

Hernandez also said, “President Trump’s suggestion that he is somehow protecting minority workers by restricting immigration is preposterous and insulting given how actively he has attacked worker and civil rights at every opportunity.”

Trump cited Canada as an example of a country that has a points system to favor skilled immigrants for residency in that nation. But that point system is used to screen only about 60 percent of the 250,000 immigrants the nation of 36 million accepts each year. The other 40 percent are allowed into the county for “humanitarian or compassionate grounds or for public policy reasons.”

To match Canada’s immigration rate, the United States, with a population of more than 320 million, would have to accept about 6 million skilled immigrants, instead of the RAISE Act’s 140,000. And it would have to allow another 4 million other types of immigrants a year, instead of the less than 400,000 that would be allowed into the United States under the legislation.

Canada’s provinces also are allowed to implement their own immigration policies, which open the doors to that nation to another 40,000 immigrants a year, and the nation takes in an additional 40,000 refugees annually. The RAISE Act would allow 50,000 refugees entry into the United States each year.

Gioia said Trump’s focus on skilled immigrants is a good idea, but called the 140,000-a-year cap on them “stupid.”

Gioia also said immigrants are a boon to the state’s economy because “first, they tend to work, and second, they tend to open more businesses than native Americans.”

About 120,000 of Connecticut’s foreign-born population, or a little less than a fourth, are thought to be undocumented. But the majority are legal immigrants.

In its 2015 population survey, the census said that about 131,000 of Connecticut’s foreign-born population comes from Europe. Another 120,000 were born in Asia and nearly 21,000 in Africa. (Click here for census details on the origins of the state’s foreign-born residents.)

There also were nearly 211,000 immigrants from Latin America, coming from more than 30 nations south of the U.S. border.