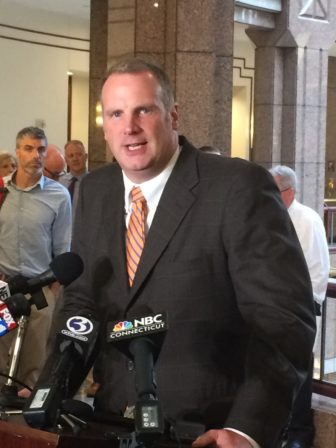 One of the leading municipal advocates says the House Democrats’ plan to boost the sales tax to aid cities and towns is flawed.

And Connecticut Conference of Municipalities Executive Director Joe DeLong also says he believes municipal leaders — who pitched a sales tax hike as part of their own local assistance plan back in January — would urge legislators to vote against the House Democratic option.

“We would be 100 percent opposed to that, and we would ask legislators to vote against that,” DeLong said of the House Democrats’ proposal. “Look at the mess we are in now. Is preserving the system we have now in our best interest? The system is broken.”

Trying to end the budget gridlock that has paralyzed state officials since February, House Democrats proposed a two-year budget on June 29 that’s centered on raising the sales tax rate from 6.35 percent to 6.99 percent, producing roughly $420 million in new annual revenue.

The House Democratic plan also would place a 1 percent sales tax surcharge on restaurant patronage, and a matching surcharge on the hotel tax, generating between $70 million and $80 million per year.

In addition, the House Democratic plan rejects two other proposals from Malloy that would affect municipalities or local property taxpayers:

But DeLong said the House Democrats’ plan “is not structural change, and it is not revenue diversification.”

CCM, working with a bipartisan panel of mayors, first selectmen and town managers, recommended both broadening the sales tax — canceling various exemptions — and boosting the rate to 7 percent. The proceeds also would be dedicated to cities and towns.

But CCM complemented this plan with a series of recommendations, DeLong said, to ensure that local governments could use these sales tax receipts — in most cases — to lower property taxes.

The CCM plan would amend collective bargaining rules regarding binding arbitration — a process cities and towns routinely go through each year to settle compensation for teachers, police officers, public works staff and other unionized employees.

It would exempt new sales tax dollars dedicated to communities from the arbitration review process. In other words, an arbiter could not weigh those grants when assessing a community’s ability to afford worker raises.

Similarly, CCM’s plan also would revise collective bargaining laws to make it easier for neighboring towns to economize and provide services on a regional basis.

But that proposal drew criticism from labor, since it also would exempt new services provided regionally from collective bargaining. And if two or more communities wanted to merge existing services provided by unionized employees, compensation for those workers would have to go through a new collective bargaining effort, rather than being tied to conditions set in previous union contracts.

And House Speaker Joe Aresimowicz, D-Berlin, said some of his caucus members remain wary of the CCM proposal.

“House Democrats agreed to raise the sales tax to ensure municipalities could be kept whole” in the face of a major budget deficit, the speaker said.

Analysts project state finances, unless adjusted, would run $2.3 billion or 12 percent in deficit this fiscal year and $2.8 billion or 14 percent in the red in 2018-19.

Aresimowicz said DeLong and any other advocates of the CCM proposal “still have some work to do. They need to go out and educate the members as to why that’s important.”

Another sticking point, the speaker said, is that the CCM proposal immediately would capture revenues from the sales tax hike — before they are received in the state budget’s General Fund — and transfer them directly to local coffers.

Local leaders argue this is essential, saying too often pledges of increased aid from General Fund resources are reneged upon by legislatures and governors.

But this disagreement over when to redirect revenue has larger implications.

Connecticut has a cap on state borrowing that is tied directly to annual revenues dedicated to the General Fund. And if sales tax receipts are sent to communities before they are received in the general fund, the cap will place greater restrictions on borrowing.

And Aresimowicz noted that cities and towns are the single-largest beneficiaries of state bonding, which is used to finance municipal school construction; road repair and other capital improvement projects; open space and farmland preservation; and miscellaneous, smaller projects.

“I’m happy to have a discussion” about the CCM plan, “but it better be a global discussion looking at all of the impacts,” he said.