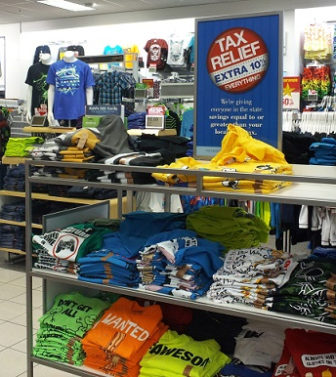 The sales tax holiday comes as state residents get ready for back-to-school shopping.

Connecticut remains without a budget six weeks into the new fiscal year, but officials are planning to move forward with the state’s 17th-annual sales tax holiday later this month.

In fact, they have little choice. State statute mandates it be held in the third week of August every year – even without a budget in place.

So, between Aug. 20 and 26, Connecticut residents won’t have to pay sales tax on most individual clothing and footwear items priced under $100.

The Department of Revenue Services estimates the state will miss out on about $4.1 million in revenue – a small sliver of the state’s $20 billion annual budget.

Kevin B. Sullivan, commissioner of the Department of Revenue Services, argues the “economic boost more than makes up for” the lost revenue, though he concedes research is mixed on whether more business is being done during the holiday week.

“In Connecticut and other states, the sales tax holiday generally falls around back-to-school season and getting a sales tax break certainly helps,” Sullivan said. “Just as important, retailers will add promotional inducements such as discounts, so there’s a price savings plus a tax savings and the ability of consumers to upscale their purchases.”

The holiday comes as some Democratic lawmakers are pushing for a sales tax increase as a tool for bringing the still-incomplete two-year state budget into balance.

Lawmakers are grappling with a $3.5-billion, two-year deficit – down from $5.1 billion after the ratification of labor concessions package last month expected to save $1.57 billion over the next two years.

Gov. Dannel P. Malloy made deep cuts to social services under an executive order that is governing the state’s finances without a budget in place, prompting outcry from advocates for the state’s neediest populations.

Millions of dollars in municipal aid also remain in jeopardy. The first round of large aid payments to the state’s cities and towns will go out at the end of September, and would be dramatically curbed under Malloy’s executive order.

Malloy has said his options for keeping the state’s finances in balance are limited without a budget in place.