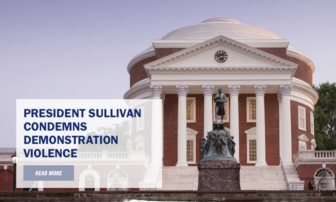 The top of the University of Virginia’s website Saturday linked to a statement by the school president condemning violence and a “message of intolerance and hate.”

Washington – Sen. Chris Murphy on Saturday accused President Trump of giving license to “racism, anti-Semitism and homophobia” that fueled passions at violent white supremacist and neo-Nazi protests at the University of Virginia on Saturday.

“Racism, anti-Semitism and homophobia are tragically alive and well in America today. And make no mistake – these insidious psychologies have been given license to be brought out in the open air by a president that openly seized upon these hatreds during his campaign, and continues to traffic in divisive rhetoric and hateful policies in the White House,” Murphy said.

He also said, “What has happened in Charlottesville over the last 24 hours should be a call to action for every American who has grown complacent under the assumption that our nation’s moral arc naturally bends toward inclusion and tolerance.”

As of late Saturday, one person had been killed and about 35 been injured during violent clashes at a white nationalist rally in Charlottesville, Va.

The fatality was a 32-year-old woman killed by a car that drove into a crowd of counter-protesters.

Gov. Dannel P. Malloy also placed blamed on Trump for the violence and outpouring of hate at the UVA campus.

Malloy called the “hatred and xenophobia” of the white nationalists “sickening.”

“What’s also tragic and unacceptable is the silent complicity from the highest office in our land,” Malloy said. “This horror is not being wrought from ‘many sides,’ as the President says.  It is coming from one side, and the President has never unequivocally denounced that side throughout his campaign or presidency.  Instead, he has incited violence in his speeches, sought to divide people, diminished the rights of minority groups, and instigated fear.”

In brief remarks at a late-afternoon news conference to discuss veterans’ health care, Trump said “the hate and the division must stop and must stop right now,” without specifically mentioning white nationalists or their views.

“We condemn in the strongest possible terms this egregious display of hatred, bigotry, and violence on many sides. On many sides,” the president said.

That “many sides” comment drew condemnation from congressional Republicans as well as Malloy.

“Mr. President – we must call evil by its name. These were white supremacists and this was domestic terrorism,” tweeted Sen. Cory Gardner, R-Colo.

“As Cory shows, #Charlotesville is not a party issue. It is a question of whether you have a moral compass,” Himes said.

Meanwhile, Sen. Orrin Hatch, R-Utah, tweeted, “We should call evil by its name. My brother didn’t give his life fighting Hitler for Nazi ideas to go unchallenged here at home,” and Sen. John McCain, R-Ariz., said “a violent attack has taken at least one American life and injured many others in a confrontation between our better angels and our worst demons.”

“President Trump’s words today were nothing more than a dog whistle to the people whose hateful ideologies spurred violence that left one dead and many more injured,” Blumenthal said. “Our leaders must condemn hate and bigotry in no uncertain terms, consistently, repeatedly and unequivocally.”