With re-election in sight, another long walk for Chris Murphy 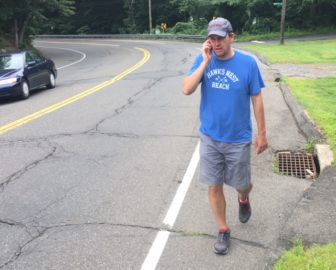 U.S. Sen. Chris Murphy takes a call from his staff about an immigration case.

His name was Henry, and he seemed dubious when an unshaven and sweaty urban hiker named Chris Murphy approached him outside a pawn shop on West Main Street in Meriden, offered his right hand and said, “Hi, I’m your U.S. senator.”

Murphy, who turned 44 on Aug. 3, gave Henry one of his embossed U.S. Senate business cards and told him he was spending the congressional recess on a 100-mile walk across Connecticut from Killingly on the Rhode Island border to Danbury on the New York line. Meriden Pawn, where Henry had some unhappy business Tuesday afternoon, was roughly half way.

It turned out Henry was having a bad day. His landlord had just dumped his belongings by the curb and changed the locks. His wife and children waited in a parked Honda Civic for Henry to finish at the pawn shop. Now a U.S. senator on his recess wanted to talk.

Henry started to talk. He talked about holding a job as a driver that didn’t pay enough, not for the rent, the gas and the electric in a state with a median housing cost of $1,398 a month, the sixth-most expensive in the U.S. He said his landlord was evicting him without a court order, but his stuff was on the street.

“He just went in there and changed the locks,” Henry said. “It’s not fair.”

Murphy, a Democrat who has $5.1 million in the bank for next year’s campaign for a second term, pointed to a phone number on the card in Henry’s hand and gave him the name of a staffer to call, someone who could help make sure he at least had his day in court. The two men shook hands, and Murphy resumed his walk, his second in as many years.

He began this year’s walk Sunday, the day after a car plowed into a crowd of people demonstrating against a gathering of white nationalists in Charlottesville, Va. Each night, he ends with a town hall meeting, Sunday in Willimantic, Monday in Portland and Tuesday in Waterbury. He’ll be in Newtown on Wednesday night. 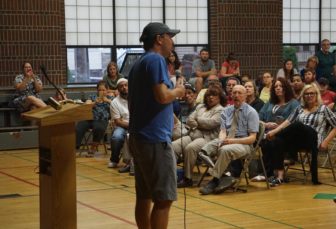 “It’s been really interesting,” Murphy said. “Charlottesville has been a constant topic. People are freaked out about what happened there, and they are a little embarrassed at the reaction of the president. But with that as the exception, people are not talking to me about things that are on the cable news shows at night.”

Justin Taylor, 29, stopped him in downtown Meriden to talk about the shortcomings of mass transit in Connecticut. He takes a long, complex series of bus rides to Manchester Community College.

Murphy encountered U.S. Rep. Elizabeth Esty, D-5th District, who succeeded him in the House in 2012. They walked together for a block, running into Laura Verselli and her mother, Louise Chittenden. The two women from Guilford had been tracking Murphy’s walk on social media, eager to talk to him about Medicaid, Medicare and keeping the Affordable Care Act alive.

Verselli, who has lupus, said, “I’m one of the people who really…”

Murphy said health care is a topic raised across the state. In Waterbury, speakers at the town-hall meeting would thank him and applaud his opposition to repealing the Affordable Care Act. Others wanted to talk about the state budget, their fears about diminished school funding and an economic recovery that seems far too tenuous.

The walk keeps him grounded, he said.

“The danger of sitting in your office and waiting for people to call you and email you is that you do get a lot of people who do have political ideologies behind their phone calls and their letters, both from the left and the right,” Murphy said.

Life in the Senate has been an adjustment.

If re-elected next year, Murphy will begin 2019 having spent more time in the U.S. Senate than any other office. As a young senator comfortable on social media, his name gets mentioned from time to time as a potential presidential contender, but Murphy said the Senate is his home.

“I cop to having had a ton of political ambition, but part of the reason I’m not thinking about a presidential run is that it’s nice to just focus on doing one job and one job well,” Murphy said. “For a long time, I was constantly thinking about another race. This is a great job, being in the U.S. Senate.”

President Trump twice intruded on his walk Tuesday. With Trump’s crackdown on undocumented immigrants, deportation cases have become a major source of case work for Murphy’s office. On a long, uphill walk past Hubbard Park in Meriden, Murphy talked to an aide by phone about the latest deportation case, an undocumented man whose wife and children are U.S. citizens.

Closer to Waterbury, Murphy learned of Trump’s contentious press conference Tuesday about Charlottesville. The president had relented Monday and read a statement specifically denouncing the white supremacists and Nazi sympathizers, something he declined to do Saturday or Sunday.

But Trump backtracked Tuesday, drawing condemnation from Republicans and an incredulous Tweet from Murphy, saying he nearly threw up upon reading president’s remarks.