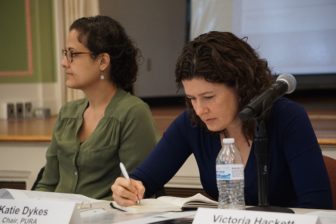 Katies Dykes of PURA, right, and Mary Sotos, the deputy in charge of energy policy at DEEP.

Dominion Energy has tried for two years to convince the General Assembly that cheap natural gas is depressing the price of electricity, jeopardizing the financial viability of its Millstone nuclear plant, potentially a devastating blow to Connecticut’s economy and its ability to meet goals for reducing greenhouse gases.

Now, with an opportunity to prove its claims, Dominion was non-committal Thursday about whether it will provide the financial data sought by two state agencies tasked by Gov. Dannel P. Malloy with assessing by Feb. 1 whether the state needs to change the rules for how electricity is bought and sold to ensure the financial viability of Millstone.

Dominion offered no testimony Thursday as the Department of Energy and Environmental Protection and the Public Utilities Regulatory Authority formally opened the assessment with a public hearing in Hartford, the first of several public sessions. Several of its competitors urged the two agencies to grant no relief unless Dominion proves its case.

The company’s chief lobbyist, Kevin R. Hennessy, had no substantive comment after the hearing about the scope of the operational and fiscal data the two agencies have asked Dominion to deliver by Aug. 29. The data will be public, unless Dominion asserts it is proprietary.

“We’re reviewing it,” Hennessy said. “We’ll be submitting comments. We’ll cover it there.”

The loss of the Millstone station in Waterford, which has two active reactors that together are capable of producing half of Connecticut’s electricity, would be a blow to the economy of southeastern Connecticut. Millstone produces about 98 percent of the carbon-free electricity consumed in the state.

“We are endeavoring to move as quickly as possible. We recognize the urgency of this question,” said Katie Dykes, the chair of PURA. “There is no question this is a very critical issue for our state and region.” 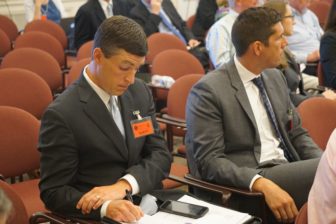 Undisputed is that the nation’s aging nuclear industry has been hard-hit by the sudden glut of natural gas produced by fracking. An MIT study concluded that two-thirds of the U.S. nuclear power capacity will become unprofitable in the coming years, but that Millstone was the most profitable plant in the U.S.

At issue is how much longer Millstone will remain profitable. Dominion disputes portions of the MIT study, as well as an assessment prepared in April for the Electric Power Supply Association that concluded the plant is profitable and will remain so for five years.

Dominion purchased the two reactors in 2001 for about $1.2 billion. The association’s consultant says profits from Millstone allowed Dominion to cover the purchase price in just five years, but plentiful natural gas in recent years has depressed wholesale electric prices on the open market.

Electricity is sold as a commodity in Connecticut, which largely deregulated the electric industry. The two major private utilities in the state no longer generate power; they only transmit it to consumers.

Hennessy said Dominion had sought legislation that would have allowed it to sell some of its power directly to consumers, but only if that would be judged by PURA and DEEP to be in the best interest of ratepayers.

“So when I hear utilities, when I hear generators, when I hear consumer advocates bashing that process, it’s interesting because I dont hear them bashing it when it’s for large-scale hydro projects that they are pursuing, it’s not for renewables that are on line,” Hennessy said. “So we’d like to see the politics put at the door where they belong.”

But Dominion and its opponents, both competitors and consumer advocates like AARP, spent heavily on lobbying during the legislative session to resolve the issue politically. Tom Swan of the Connecticut Citizen Action Group said Dominion hardly was eschewing politics.

“They’re looking to change the rules for them to get a special deal without the expectaton of being treated as a regulated utility, where their return is based on a cost of service,” Swan said during the hearing. “It is unfathomable to me that we would consider doing this.”