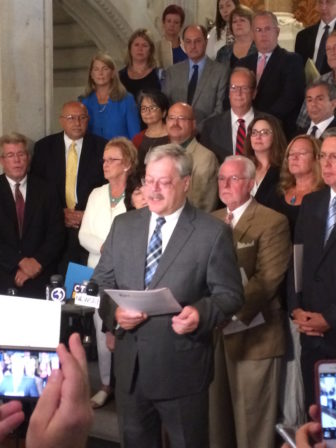 During a press conference at the Capitol, the Connecticut Conference of Municipalities also contested a Malloy report earlier this month that aid to communities has surged 21 percent during his tenure.

The governor’s plan to help close projected deficits of $1.6 billion this fiscal year and $1.9 billion in 2018-19 includes reducing major statutory grants to cities and towns by about $320 million per year.

And while Malloy would enable communities to tax nonprofit hospitals’ real property — an estimated gain of $212 million per year — he also would bill cities and towns for $400 million annually to help cover rising teacher pension costs.

CCM Executive Director Joe DeLong said neither the governor nor legislators from either party have proposed structural changes to stem rising teacher pension costs in the future. Neither have they repealed costly mandates or removed roadblocks to help communities regionalize services and cut costs.

“The governor’s budget … did not lead with reform,” DeLong said. “It led with revenue. Let’s be very clear about that.”

By shifting these burdens onto municipalities, Malloy is able to limit the tax increases and other fee hikes in his plan to about $280 million this year. That’s less than half of the increases the governor and the legislature approved in 2015 and less than one-sixth of the increase they ordered in 2011.

But while Malloy says cities and towns should be able to cover at least some of this cost shift by cutting local expenses, municipal leaders countered Wednesday that it would spark property tax hikes across Connecticut.

The administration released a report last week defending its track record on local aid and saying it has little choice but to shift costs as state government deals with surging retirement benefit expenses tied to decades of inadequate funding.

“As a former mayor, former member of local boards of finance and education, and as a father who raised three children here, I know just how important state funding is for every city and town in Connecticut,” Malloy, who was mayor of Stamford from 1995 through 2009, said when the report was released. “That’s why my administration has been highly protective of municipal aid over the past six years.”

But municipal leaders argued Wednesday that the report is flawed.

The report counts $77 million in sales tax receipts sent to communities last year. But those were were used to replace local tax receipts towns lost because the state imposed a new cap on motor vehicle taxes.

It does not mention that property tax relief grants were less than half of the level called for by state formulas, falling about $1 billion short over the past five years combined.

And it does not address more than 1,300 state mandates “that dictate nearly 50 percent of municipal spending,” according to CCM’s written response to Malloy’s report.

New London Mayor Michael Passero said 45 percent of the property in New London is exempt by state law from local taxation. “It has been unsustainable for a number of years, but this year it is especially killing us,” he said, adding that local property taxes rose by 9 percent this summer.”

“While we can disagree on our opinions, we should not disagree on the facts. And the fact is, over the last five years, municipal aid increased 21 percent as billions of dollars have been slashed elsewhere in the state budget,” Chris McClure, spokesman for the governor’s budget office, said Wednesday.