Deal or not, House Democrats pledge budget vote next week 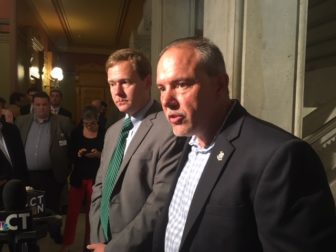 House Democratic leaders said Wednesday they intend to call a vote on a budget next week with or without a deal with Gov. Dannel P. Malloy and the Senate, a ploy to force wavering lawmakers to decide between an imperfect spending plan and the “cataclysmically worse” choice of forcing Malloy to slash municipal aid by executive order.

House Speaker Joe Aresimowicz, D-Berlin, said the arrival of Oct. 1 without a budget would guarantee cuts in municipal aid that would ripple through every public school in the state, instantly transforming a budget impasse into a full-blown fiscal and political crisis — with the blame laid at the feet of every lawmaker.

“We’ll make it very clear on the House floor, and I’ve said this before, If you are not part of the solution, you are voting for the executive order,” said House Majority Leader Matt Ritter, D-Hartford. “That’s the reality. That’s what’s going to happen.”

But missing from the scenario outlined by Aresimowicz and Ritter was a key element: What exactly would be in the budget up for a vote next week?

The House Democrats do not yet have a budget ready to place before the House, with the governor and Republicans expect to suggest their own revisions and ideas Thursday. Aresimowicz said he was approaching “an understanding” with Senate President Pro Tem Martin Looney, D-New Haven, but had no deal.

Under the rules of the special session, Aresimowicz cannot place a budget before the House without the consent of Looney.

Aresimowicz said his caucus still is cool to Malloy’s call for municipalities to assume a portion of the costs of teacher pensions, even after the governor suggested in an interview with CT Mirror that he was willing to cut his demand by half.

Another complication is that a sales tax increase favored by many House Democrats is worth less with the passage of every month without a higher rate.

Aresimowicz conceded that his credibility is suspect on the topic of predicting budget votes, given his months of misplaced optimism about the General Assembly’s progress towards a budget for the fiscal year that began July 1.

Ritter said a budget vote, even if it falls short, could clarify what is possible.

“There is something carthartic about getting in the room and doing it,” he said.