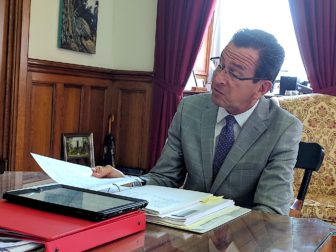 Gov. Dannel P. Malloy in his office Tuesday leafs through a binder of historical state funding levels for municipalities.

Gov. Dannel P. Malloy has offered a major compromise to end the state budget standoff, scaling back his proposed shift of teacher pension costs to cities and towns by half.

Malloy, who originally suggested communities cover one-third of the fastest-growing expense in the state budget, told The Mirror on Tuesday he would accept their contributing only the costs tied to present-day teachers.

The massive-and-rapidly growing unfunded liability — compensating for decades’ worth of contributions not made by past governors and legislators — would remain the state’s responsibility.

And while the governor said he remains committed to a new, two-year state budget that does not “lead with revenue” to close major projected deficits, he is willing to discuss revenue options to hasten an agreement.

Malloy said his administration offered the compromise earlier this summer in negotiations with legislators, but he is concerned about perceptions in the media that he has been inflexible in budget talks.

“This idea that we just put a budget out there and we won’t budge is not fair and is not appropriate,” he said. “We have repeatedly demonstrated a willingness to discuss things.”

The governor originally asked cities and towns in February to cover one-third of teacher pension costs, which would have meant payments totaling $408 million this fiscal year and $429 million in 2018-19.

After municipal leaders and lawmakers balked, noting those burdens would grow dramatically over the next 15 years, Malloy agreed in May to cap his ask at $400 million per year.

But with Connecticut now nearly 10 weeks into the new fiscal year without an approved budget — and with the standoff costing communities hundreds of millions of dollars in state aid — the governor scaled back his request again.

“I continue to be surprised at the lack of urgency and I’m trying and have tried to do something about that,” Malloy said. “At some point, if we don’t get a budget there’s going to be a lot of hurt out there. That’s what I’m trying to avoid, not what I’m trying to cause.”

The governor said Tuesday he would accept communities paying the “normal cost,” an actuarial term referring to the full amount that must be set aside annually to cover the future pensions of present-day teachers.

Malloy also didn’t rule out phasing in the pension bills so communities might pay less than the normal cost in the first year of the new two-year budget. “We have to get to the point where municipalities help with this,” he said.

One of the chief objections municipal leaders raised to the governor’s proposal is that teacher pension costs are too volatile, and that this volatility largely stems from decades of irresponsible savings’ decisions on the state’s part.

But the “normal cost” also is a relatively stable component of the teacher pension contribution and is projected to grow very modestly over the next 15 years.

“The state’s not backing away from our obligation to fund that which wasn’t funded,” Malloy said.

But the governor also said he is adamant that communities must share some responsibility for funding teacher pension costs.

The $1 billion contribution the state made to the pension fund last year is slated — according to a study prepared for the state in 2014 by the Center for Retirement Research at Boston College — to skyrocket over the next 15 years, potentially topping $6.2 billion by 2032.

“We are the only state that funds teachers’ retirement the way that we do,” Malloy said. “The state has a gigantic obligation, primarily because the state failed to properly fund and recognize the growth of that benefit. And we need to have structural change with that benefit, just as we have restructured other benefits.”

The research team from Boston College found that the benefits provided to retired teachers are not more generous than those in most states. In Connecticut, the employer must contribute 3.7 percent of a teacher’s salary toward their future retirement benefits compared to the national average of 7.4 percent.

Opponents of the governor’s cost-shift proposal have said that it could make teaching a less attractive profession since districts might in turn reduce benefits or stall pay increases to cover this new cost.

“I think it’s nonsensical,” Malloy said, pointing out he has never heard of someone unwilling to move to the state or go into teaching because of an impression that Connecticut does not offer proper retirement benefits or pay.

By accepting only about half of the $400 million in annual pension payments from cities and towns, the governor would need to rebalance his own plan.

And Malloy said Tuesday he has not insisted that this gap be filled entirely by spending cuts. Raising revenue is on the table, as long as it is not suggested as the primary means to balance the books.

Analysts say state finances, unless adjusted, would run $1.6 billion in deficit this fiscal year and $1.9 billion in the red in 2018-19.

Malloy added there is a “very good chance” he would issue a revised budget proposal later this week or next.

Both House Speaker Joe Aresimowicz, D-Berlin, and Senate President Pro Tem Martin M. Looney, D-New Haven, have said they agree with the governor, in concept, that communities should share some responsibility for paying these pensions.

How much the state can address that issue in a single year, in one budget, is the question.

“The governor raises a valid point. In most other states there is a sharing arrangement,” Looney told The Mirror last month. “But I think addressing $400 million of it all at once is beyond what there could be consensus on” in the legislature.

Looney and other lawmakers note that the property tax long has been recognized as the single-most regressive levy — among all state and local taxes — in Connecticut.

The property tax was highlighted in a 2015 state report that found that households earning less than $48,000 per year effectively pay nearly one-quarter of their annual income to cover state and local taxes. That also includes families and individuals who rent their housing, and whose rental charges reflect the property taxes their landlord must pay.