Malloy would ease cost shift onto towns by nearly $775M 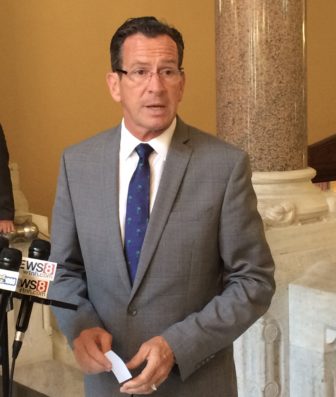 Gov. Dannel P. Malloy announced Thursday he would ease proposed municipal aid cuts and other cost-shifts onto cities and towns by nearly $775 million in an effort to end the state budget standoff that has extended 10 weeks into the new fiscal year.

Malloy, who will issue another revised two-year budget plan — his third — on Friday, released a few details one day earlier.

The governor, who said this week he would curtail his proposal to transfer teacher pension contribution costs onto municipalities, now wants communities to pay $92 million this fiscal year and $190 million in 2018-19. That’s $547 million less over the biennium than Malloy originally sought.

He also agreed Thursday to scale back his proposals to reduce municipal aid considerably, restoring $137 million in the first year and $89 million in the second, or $226 million over the biennium.

It was not immediately clear how the governor would rebalance his budget. The governor told The Mirror earlier this week that he would consider raising some additional revenue. But he also said it remains vital that spending reductions are the chief tool used to balance state finances.

“It is imperative that leaders in state government come together and pass a biennial budget – one that continues to address Connecticut’s real fiscal challenges head on,” Malloy said. “The reality is that in an extremely difficult budget year, no one is going to achieve all of their priorities. There are no easy answers left or rabbits that we can pull out of a magical hat. We have to meet one another in the middle and make difficult compromises, and we do it in a way that stabilizes the state’s finances over the long-term.”

Malloy: Local aid must be reformed

Malloy also said this additional local funding must be accompanied by a redistribution of education aid away. The Democratic governor has been pushing for months for legislators to redirect education grants away from wealthy and middle-income communities and into the state’s lowest-performing school districts, which are located in some of its poorest cities and towns.

A Hartford Superior Court judge ruled last September that Connecticut’s distribution of education funding is irrational and unconstitutional, failing to meet the needs of students from its most impoverished districts. The ruling is on appeal to the state Supreme Court.

Other municipal aid also must be accompanied by reform, Malloy said.

The governor is insisting that lawmakers increase oversight of municipal finances to target communities at risk of fiscal insolvency or other budgetary problems before they become severe.

“I have a long history of developing and negotiating budgets,” Malloy said.  “I understand that a budget is a reflection of multiple perspectives and priorities – it is the result of a lot of effort to find common ground and requires compromise on all sides.  Such compromise will be reflected in the next proposal I put forward.”

But the governor also characterized this latest push for a compromise as his last.

“Each of us has a bottom line,” he said.  “The compromise budget I put forward will represent my bottom line on several key reforms I adamantly believe we must accomplish for the future of our state.”

Municipal leaders have been clamoring for a new state budget as the summer has waned.

By this point one year ago, communities already had received $30 million in road repair grants and $78 million in general aid through a program to share state sales tax receipts.

But the stakes get much higher if there is no budget four weeks from now.

About $182 million in property tax relief grants normally is released on Sept. 30.

And Malloy has said the major education grant to local school districts, slated to go out on Oct. 1, would have to be reduced by 28 percent if there is no new budget.

Neither the Connecticut Conference of Municipalities nor the state’s Council of Small Towns commented on the governor’s latest proposal, saying they would wait to review his entire, revised budget plan on Friday.

But legislative leaders both expressed cautious optimism at the governor’s proposal.

“That seems to be moving in the direction where our caucuses are,” Senate President Pro Tem Martin M. Looney, D-New Haven. “So that’s encouraging but I can’t say more about it at this point because I haven’t seen the particulars.”

“It’s a positive step forward,” House Speaker Joe Aresimowicz, D-Berlin, said. “It shows we could possibly get to the finish line but we need to see the details.”