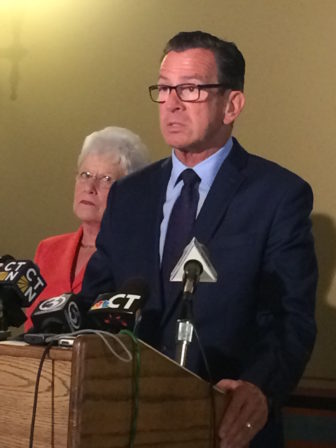 The governor also gave a sobering update on budget talks, saying Democratic and Republican legislators remain “hundreds of millions of dollars” apart in their competing visions of how to close huge projected deficits.

“We’re going to lose thousands of jobs” if legislators cannot agree on a new budget for this fiscal year and next, Malloy told Capitol reporters during a mid-afternoon briefing.

The governor said his administration is in discussions with “a number” of companies “that want to enlarge their footprint or move to our state.”

And while these types of talks regularly occur, he said, they don’t regularly come with the qualifier that nothing else will happen unless Connecticut solves its budget crisis.

Malloy has been forced to manage state finances by executive order since the fiscal year began on July 1. Analysts say those finances, without adjustments, will run $1.6 billion in deficit — a gap of about 8 percent compared with last fiscal year’s General Fund.

The governor has been forced, absent a new budget, to impose deep cuts on municipal aid and social services because many of these expenses are not fixed by contract.

Further complicating matters, the governor has said if a budget deal isn’t reached by Oct. 13, the chances of anything getting done before Nov. 1 are slim because of scheduling conflicts among legislators.

The stakes are huge if a budget deal hasn’t been reached by then for reasons besides missed job growth.

Hartford Mayor Luke Bronin says the capital city is on pace to face insolvency by early November. He has asked for $40 million per year in additional aid in the next state budget to help avert this problem.

So can a bipartisan agreement be reached in the next eight days?

“I don’t want to give false hope,” the governor said, adding that while he will remain available to negotiate with lawmakers, it takes time to reach compromise when the two sides are hundreds of millions of dollars apart.

Some of those areas of disagreement involve: pension contributions, operating funds for public colleges and universities; and general savings the administration would have to achieve after any new budget is in force.

Online gambling data could tell us much about addiction. Like most states cashing in, Connecticut doesn't want to know.