Linda McMahon and her erstwhile enemies, Richard Blumenthal and Chris Murphy, touring a factory in Hartford.

The oversized black SUV glided to a stop Friday outside Express Kitchens, a cabinet maker off I-91 in Hartford’s industrial North Meadows. Out popped Linda McMahon. Waiting was a smiling Richard Blumenthal, a man she branded a liar in a $50 million campaign for U.S. Senate in 2010.

That would be Chris Murphy, the man McMahon opposed two years later, also at a cost of $50 million. In that campaign, McMahon questioned Murphy’s ethics.

“He is coming,” replied Blumenthal.

Blumenthal and Murphy, both Democrats who were victorious, were equally harsh in their attacks on McMahon, a co-founder of the popular Stamford-based wrestling and entertainment company, WWE. To them, she was tolerant of steroid use by her wrestlers and violent, sexually charged programming that demeaned women and endangered children. 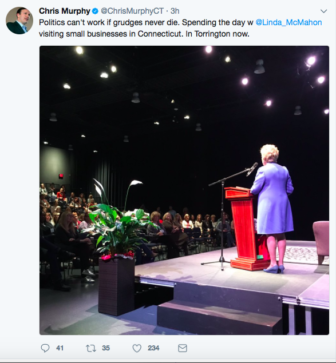 In partisan Washington, the two Democratic senators and their former Republican opponent are on civil terms, if not quite friendly. All three have displayed a certain pragmatism in their dealings.

“I was incredibly honored that both of my state’s senators were kind enough to come and recommend me for this position,” McMahon said Friday. “What I’ve also found is that SBA is probably the least partisan agency in Washington. I think everybody wants to see small businesses succeed.”

In McMahon, the two Democrats see a cabinet official who wants to make government work.

“I am trying to go to pains to find ways to create partnerships with this administration, and Linda is one of the people we can really work with here in Connecticut,” Murphy said.

“She’s intent on running the SBA,” Murphy said. “She believes in the mission.”

The two senators and McMahon toured the factory, hosted by Max Kothari. With his partner, Roger Mehta, Kothari built a small hardware business with four employees into a growing cabinet manufacturer and installer, employing 100 people. Kothari and Mehta were the SBA’s small business owners of the year in Connecticut in 2014.

Left unsaid was that Kothari hosted Murphy at Express Kitchens for a campaign event in 2012.

On Friday, McMahon and the senators did a photo op, then retreated to a closed-door meeting with about a dozen business executives. One represented a fuel-cell maker desperate to make a pitch to the Trump administration for the resumption of a fuel-cell tax credit. After the meeting ended, McMahon stayed to listen to the fuel-cell executive.

McMahon, who celebrated her 69th birthday two days ago, is on a tour of all 68 SBA districts. She started the day in Torrington, addressing a group of small business owners.

Some of her travel has been by private planes, but she has avoided the scandal about the bills run up by Tom Price, who recently was forced out as secretary of health and human services, and the treasury secretary, Stephen Mnuchin.

“If I fly privately, I pay for it all,” McMahon said. “It doesn’t even go through SBA. I just pay for it, don’t even book it with SBA.”

Murphy posted a picture of McMahon in his Twitter feed with the message: “Politics can’t work if grudges never die.”

But he later jabbed Trump in a tweet about the administration deciding to allow employers to cover contraception: “I’m sick and tired of Republicans trying to take away women’s health care in 2017.”

It was an issue in his 2012 campaign, when McMahon described herself as pro-choice, but accused Murphy of using reproductive health as a political punchline.

On Friday, she was all business. She tweeted a picture of her with Kothari, the two senators and Express Kitchen workers. Her message: “It is great to see an @SBAgov success story.”