Unions to CT lawmakers: We would see you in court 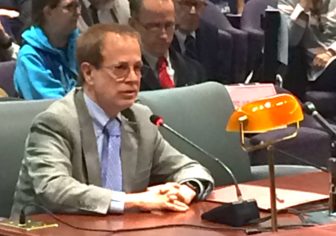 State employee unions sent a letter to all 187 General Assembly members Thursday, warning them to avoid pension changes that would lead to a court battle.

The letter from the State Employees Bargaining Agent Coalition comes as Democratic and Republican legislative leaders push toward a bipartisan budget deal that could include changes to worker pensions starting in mid-2027.

“While we continue to believe this effort would be greatly aided by applying fairness to Connecticut’s revenue system so that those most able to pay would be asked to pay their fair share, and by reviewing the billions in corporate tax loopholes, it is the unlawful collective bargaining provisions in the vetoed budget that we write now to stress,” Livingston wrote.

“Those provisions, were they to find their way into a budget that eventually became law, would give us no choice but to bring suit to defend our members’ rights, and at the same time to help defend an institution that protects all of Connecticut’s 3.5 million residents,” he added.

“This letter from union leadership unsurprisingly pressures legislators to again kick the can down the road, to preserve an unsustainable benefits structure that today threatens our state’s economy and the very services they say the General Assembly must protect,” House Minority Leader Themis Klarides, R-Derby, responded. “In describing savings provided through this summer’s SEBAC deal, their narrative of ‘sacrifice’ fails to explain the agreement’s detrimental impact on the legislature’s ability to find budget solutions.”

At issue is a Republican proposal to scale back pension benefits after July 1, 2027 — which would reduce required state contributions over the long haul — but take a portion of that savings now, in the new state budget.

Senate and House GOP leaders, who built approximately $321 million in savings tied to this plan into their last biennial budget, assert it would survive a court challenge.

But Livingston says the legal problem is twofold:

The GOP plan would “substantially reduce” pension benefits after July 1, 2027, but some of those benefits would have been earned before that date, when they still were guaranteed by a contract “which could be changed only by negotiations or mutual agreement.”

“These contractually earned benefits are protected against these bait and switch tactics by the United States and Connecticut Constitutions,” Livingston wrote. “We would have no choice but to enforce those constitutional protections.”

Klarides added that “We disagree not only with their assertions over the legality of the budget’s bipartisan structural reforms, but also the very foundation of the message that union leadership is using to unnerve membership—that we’re working to dismantle collective bargaining. In reality, the opposite is true. The bipartisan budget attacks the monumental structural challenges that grip our pension and benefits system—not state workers. To ignore those problems, as union leadership has proposed, is the ‘morally wrong’ path legislators must avoid.”

“Government unions that represent 45,000 employees apparently want to dictate how a state of 3.6 million people governs itself,” said Carol Platt Liebau, president of the Yankee Institute, a conservative policy think-tank based in Hartford. “The fact that this powerful special interest actually feels entitled to overrule the people’s elected representatives shows clearly why Connecticut now stands on the brink of fiscal catastrophe. SEBAC — an organization that claims its members serve our state’s residents — ought to be ashamed.”

The labor coalition’s arguments echo those made in recent months by Gov. Dannel P. Malloy, who said the GOP’s proposal also would constitute bargaining in bad faith on the part of state government.

The Democratic governor’s administration was in talks with union leaders between November and May, which led up to a concessions deal estimated to save the state $1.57 billion across this fiscal year and next combined, and $24 billion over the next 20 years.

Nearly half of the immediate savings come from most workers’ acceptance of a three-year pay freeze and three furlough days.

But some critics challenged the projected savings on several grounds.

The agreement eliminates the state’s ability to impose layoffs under most circumstances over the next four years, and it adds five years — from mid-2022 to mid-2027 — to the current benefits contract.

But the deal also allowed for a myriad of working condition changes and other provisions in various bargaining unit contracts. Nonpartisan analysts did not have time to assess the costs associated with those changes before the legislature ratified the deal in late July.