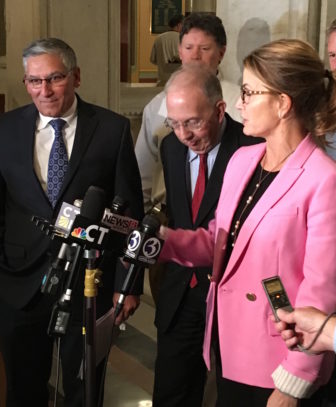 State legislative leaders say they need a tentative, bipartisan deal by mid-afternoon Wednesday to keep alive their hopes of adopting a new state budget next week.

And if there is a bipartisan deal, it won’t include a hotly contested GOP proposal to cut state employee pension benefits in 2027 and reap big savings now.

Leaders were cautious not to predict success or failure, but lawmakers from both parties said that, while some key issues remain to be resolved, much progress has been made.

“I think the last week has been the most productive in this building that we’ve had all year long,” said House Minority Leader Themis Klarides, R-Derby. “And the conclusion will be the conclusion. I think we all have hope that we can come to an agreement on something that’s best for the state.”

Connecticut now has gone 109 days into the new fiscal year without a new, two-year budget. Analysts say state finances, unless adjusted, will run $3.5 billion in deficit over the biennium.

Both parties have battled over a number of issues including tax cuts, labor costs, and reductions in municipal aid, higher education and social service programs.

Gov. Dannel P. Malloy, who has managed state finances by executive order since the fiscal year began July 1, has withheld hundreds of millions of dollars in municipal aid to compensate for surging retirement benefit and other debt costs — which are fixed by contract — and declining income tax receipts.

Trying to break the impasse, legislative leaders have excluded the administration from the negotiations since shortly after Malloy vetoed a GOP-crafted budget that narrowly passed the legislature with eight Democratic votes.

Senate President Pro Tem Martin M. Looney, D-New Haven, and Senate Republican leader Len Fasano of North Haven, said a deal by mid-afternoon Wednesday — or not long after — is all but essential if the full legislature is to vote in the middle of next week.

Any tentative deal still must be presented to rank-and-file lawmakers in the Democratic and Republican caucuses, both in the House and Senate.

And though leaders have excluded Malloy’s staff from the talks for the past three weeks, they also want to consult with the governor before any deal is brought to a vote.

Fasano estimated disagreements remain to be resolved in 10 key areas.

“They are very delicate items within each of our caucuses,” he said. But he quickly added the bipartisan talks already have resolved many areas of disagreement, though he didn’t offer specifics.

“From where we started to where we are is a huge, huge, monumental movement,” Fasano said. “And all week we have taken these huge steps forward.”

“It was a very encouraging day,” Looney said.

House Speaker Joe Aresimowicz, D-Berlin, said that while Malloy’s staff has not been in the latest round of budget talks, leaders have made sure all of the governor’s concerns were discussed.

“If the governor has voiced an opinion, we have at least raised it” in the negotiations, the speaker said. “In some cases we said we understand his objection and we still moved forward. In other areas we said, ‘yeah, it’s a fair objection. Let’s try to go the other way.’”

One key concern of the governor apparently has been embraced in the talks — at least for now.

Leaders confirmed that if any tentative deal is announced Wednesday, it won’t include a GOP proposal to save $321 million in pension contributions by reducing worker benefits starting in mid-2027 — once the existing benefits contract with employee unions expires.

The governor and the unions have said the state cannot unilaterally reduce benefits — even in mid-2027 — that were earned and vested before that time. Most state employees are vested for full pension and other retirement benefits after 10 years of service.

That pension proposal was one of the chief objections Malloy cited in his veto of the GOP-crafted budget three weeks ago.

Fasano said Republican leaders reserve the option to raise this proposal in the future but have set it aside for now because, “I don’t believe the Democrats would be willing to accept the pension savings in the budget.”