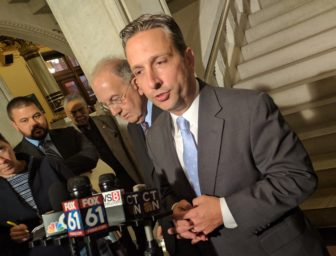 Democratic and Republican legislative leaders completed their work around 1:30 a.m.

Though rank-and-file Democrats and Republicans in the House and Senate had discussed the tentative budget in limited detail in separate caucuses held late last week and on Monday, leaders also have said the final package must go through a second round of caucuses before any vote is held.

If those caucuses go well, though, tentative plans call for the Senate to vote Wednesday and the House to vote Thursday.

“We’ve been very close from a dollars-and-cents perspective for a long time so getting to balance was really about policy more than anything else,” House Majority Leader Matt Ritter, D-Hartford, said.

While they announced the framework of a tentative deal last Wednesday, they had been struggling since then to resolve a myriad of outstanding details in the two-year budget.

Senate President Pro Tem Martin M. Looney, D-New Haven, confirmed as late as Monday afternoon that spending and revenue proposals for both the current fiscal year and for 2018-19 were out of balance.

Sources at that time said talks began Monday morning with the current year at least $30 million in deficit and 2018-19 finances more than $70 million in the red.

Though details remain limited, leaders have confirmed some components of the plan, which is designed to close huge projected deficits of about $1.6 billion this fiscal year and $1.9 billion in 2018-19.

Though a specific date for a vote hasn’t been announced yet, leaders said legislators were asked to keep Wednesday through Friday open, and Ritter added he remains optimistic a vote can be resolved during that window of time.