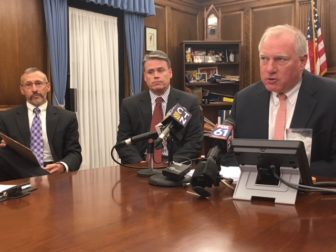 Connecticut’s attorney general alleged a far-reaching price-fixing conspiracy by global and U.S. makers of generic drugs Tuesday in a filing that greatly expands the scope of the lawsuit initiated by his office last year and eventually joined by most other states.

“The allegations of our complaint are shocking, and the depth and breadth of the conspiracies alleged are mind-blowing,” Attorney General George Jepsen said. His office is the lead in a suit brought by 45 states and the District of Columbia.

The amended complaint names a dozen pharmaceutical companies and two individuals, including a self-made billionaire, Satish Mehta, the founder of the fast-growing Emcure Pharmaceuticals, an India-based company whose key investors include Bain Capital, the private equity and venture capital firm co-founded by Mitt Romney.

Emcure’s slogan is “success through innovation,” but the amended complaint claims that Emcure and others owed financial success to a conspiracy carried out in emails, text messages and direct contact over drinks at golf outings, dinners and industry trade shows, where companies allegedly divvied up markets to boost profits and reduce competition in generics, a huge market segment once synonymous with low prices.

“This overarching agreement is widespread across the generic drug industry and is broader than the Defendants named in this Complaint,” the complaint says. Jepsen said the investigation is continuing and further amended complaints are possible, if not likely.

The cooperation among the companies was known in the industry as “playing nice in the sandbox,” the complaint says.

Examples include a dinner attended by at least 13 presidents, CEOs and senior drug executives at a steakhouse in New Jersey in 2014, and female sales representatives regularly swapping price information at “GNOs,” the industry shorthand for “girls’ night out,”  according to the new 235-page complaint filed in U.S. District Court in Philadelphia.

“This collusive methodology has evolved over time during the numerous in-person meetings, telephonic communications and other interactions between generic manufacturers about specific drugs over the course of several years, but general rules of the road have been in place since at least 2006,” the complaint says. “These events occur with such great frequency that there is an almost constant ability for Defendants to meet in person and discuss their business plans.”

The complaint says the conspirators fixed prices of about 15 drugs used to treat a wide range of  ailments, including anxiety, asthma, Lyme disease, diabetes, epilepsy, glaucoma, high blood pressure and rheumatoid arthritis. Most are chronic diseases treated by drugs taken daily, helping to fuel a generic drug industry with U.S. sales of about $75 billion, accounting for about 88 percent of all prescriptions.

Heritage Pharmaceuticals, a U.S. subsidiary of Emcure, was one of the targets in the original lawsuit filed in December in U.S. District Court in Hartford by Jepsen’s office after a two-year investigation by his antitrust lawyers. The case was transferred in August to a federal judge in Philadelphia who specializes in multi-district litigation.

The other individual sued is Rajiv Malik, the president and executive director of Mylan, N.V., the Amsterdam-based parent of Mylan Pharmaceuticals, also a defendant in the original suit.

The defendants or their U.S. subsidiaries are concentrated in a swath from northern New Jersey to the suburbs of Philadelphia.

Connecticut’s investigation began informally with an email sent July 8, 2014, from Michael Cole, chief of Jepsen’s antitrust and government fraud unit, to Joseph Nielsen, one of the unit’s 13 lawyers and four investigators. Attached was a New York Times story about a rapid price increase in a generic heart medication that Cole found suspicious.

Some quick research by Nielsen found an odd pattern. Four companies had been in the market before the price increase. Two dropped out, a new one entered the market and the remaining two raised their prices, Nielsen said, “exactly the same amount, to the same price point.”

Two days later, an official investigation was opened, and subpoenas went out within a week. Their receipt by publicly traded targets was disclosed on July 15, 2014, drawing inquiries from the industry press and the Justice Department, which is conducting a criminal investigation that has benefitted from and, more recently, conflicted with the state.

Federal prosecutors obtained a court order in May that froze discovery in the original case until December, and they sought a six-month extension Friday.

Cole and Nielsen presented their findings in September 2016 at an antitrust meeting of the National Association of Attorneys General, seeking help from what has become a cross between a mutual-assistance group and the source of legal crowdsourcing. The original suit was filed in December.

“We deny the allegations that have been brought against us and will vigorously defend them in court,” said Jordan Berman, the global director of communications for Apotex.

Jepsen had described the original complaint as the tip of an iceberg. Nielsen said the description still applies to the broader complaint as the investigation of the industry is ongoing and being conducted by state attorneys general across the U.S.

In a decision affirming the decision to transfer the case to the multi-district docket in Philadelphia, near where many of the U.S. generics makers are located, a court panel noted a long road ahead:

“The States contend that they are further advanced with respect to discovery on account of a three-year investigation by the Attorney General of Connecticut that preceded the complaint. Even so, the schedule in place in the State Action envisions nearly two years of further discovery (which has not yet begun).”

The original complaint focused on two drugs: doxycycline hyclate, a delayed-release antibiotic used to treat everything from acne to Lyme disease; and glyburide, an oral diabetes medication. The new list includes doxycycline monohydrate, an antibiotic that has become more popular as demand and prices rose for doxycycline hyclate.

Nielsen said a court order staying civil discovery — the exchange of documents by the plaintiffs and defendants — is a complication, but not an obstacle to continuing the investigation. It applies only to information pertaining to the drugs named in the litigation.