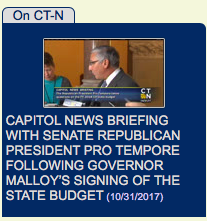 CT-N, the public’s video window into operations of the General Assembly and other government functions, will continue operations past the expiration at midnight Tuesday of the legislature’s contract with the network’s non-profit operator.

CT-N’s only operator since its founding two decades ago, the Connecticut Public Affairs Network, is struggling with new tighter rules for covering the Capitol imposed by the legislature’s partisan staff and the intercept of half the cable-television revenue that used to fund it.

“To continue operating after midnight, we agreed to a temporary continuation of service at a much reduced per diem rate,” said Paul Giguere, the president the public affairs network. “So, we will cover the Judiciary Committee tomorrow. CT-N is still alive, for now.”

The legislature’s Judiciary Committee is scheduled to hold a hearing at 10 a.m. on the confirmation of two nominations to the state Supreme Court and one to the Appellate Court.

Discussion about what level of service would be possible with the new budget will continue, Giguere said.

On Tuesday, CT-N broadcast press conferences held by Gov. Dannel P. Malloy and Senate Republican leader Len Fasano of North Haven, where both were asked about the future of CT-N.

Fasano defended the revenue intercept, which helped offset a budget deficit. He said many aspects of government will have to get by with less.