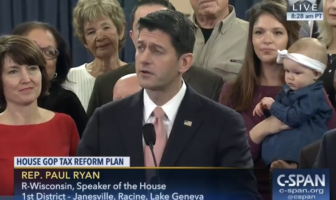 Billed as a boon to the middle class by its supporters, the tax overhaul was panned by Democrats — including lawmakers from Connecticut — and some Republicans concerned about its elimination of the popular deduction for state and local income taxes.

The GOP plan would shrink the number of individual tax brackets from seven to four.

The lowest bracket would no longer be 10 percent, but 12 percent and include all individuals earning up to $45,000 of taxable income per year. For married couples filing jointly, the cutoff for this tax rate would be $90,000.

The highest tax bracket, at 39.6 percent, would be levied on income over $500,000 for individuals or $1 million for married couples.

But the tax plan also would eliminate many popular deductions.

One that has roiled lawmakers – both Democrats and Republicans – in high-income states like Connecticut, New York, New Jersey, Massachusetts and California – is the tax plan’s elimination of the deductibility of state and local income (SALT) taxes. Those states also tend to lean Democratic.

“For any blue state, this is a huge, huge hit for middle-class taxpayers,” said Connecticut Department of Revenue Services Commissioner Kevin Sullivan.

Sullivan estimates that tax break is worth $8.7 billion a year to state taxpayers.

Rep. Elizabeth Esty, D-5th District, has sponsored a resolution that urges the restoration of the deductibility of SALT taxes that is backed by all members of Connecticut’s U.S. House delegation.

While Esty’s resolution has a hard climb in a GOP-controlled House, some Republican lawmakers are balking at their party’s tax overhaul because it would eliminate the SALT deductions.

The proposal also would eliminate the medical deduction and a number of others, including the student loan interest deduction, the alimony deduction and the deductibility of fees paid to a professional tax preparer.

It also would cap the deductibility of interest paid on future mortgages at $500,000. Currently the cap is $1 million.

Those who have mortgages now valued between $500,000 and $1 million would not be affected.

There also would be a cap of $10,000 on the amount of property taxes that are deductible.

The rules on charitable contributions would remain the same.

Sullivan said he is not certain of the impact of the cap on the property tax deduction on Connecticut homeowners, but is concerned the eliminations and changes the tax plan makes to traditional deductions will prompt people to take the standard deduction instead, even if it isn’t to their benefit.

The proposal would double the estate tax exemption to roughly $11 million, from $5.49 million, meaning families can avoid paying taxes on larger inheritances. It eventually would phase out the estate tax entirely in six years.

Some last-minute proposals considered by the Republicans who drew up the tax overhaul were scrapped. Those included limiting the deductibility of 401(k) contributions and repealing the Affordable Care Act’s individual mandate.

The proposal also would scrap the Alternative Minimum Tax that nearly 100,000 Connecticut filers paid in 2014. The AMT was designed to prevent wealthy people from avoiding federal tax entirely through deductions and credits.

While the GOP touted the tax plan as a simplification of the tax code that would help middle-class workers keep more of their paychecks and spur job-creation by U.S. businesses, Democrats blasted the plan as a giveaway to the rich that would balloon the federal deficit.

Through the elimination of deductions and other means, the tax plan pays for most, but not all, tax rate reductions and would add about $1.5 trillion to the deficit.

The top corporate tax rate, which many businesses don’t pay, would be dropped from 35 percent to 20 percent.

But the tax plan also would eliminate some business tax breaks, limiting the deductibility of interest for most companies, except small firms, and the ability to deduct some forms of executive compensation.

Instead of getting taxed at an individual rate for business profits, people who own their own business or work as consultants would pay taxes at a new “pass-through rate” of 25 percent. But there would be some restrictions on the kinds of businesses that would be able to claim this rate, to avoid individuals abusing the lower tax rate.

The tax plan also proposes a first-time “repatriation” tax of 10 percent for income subsidiaries of U.S. companies earn overseas.  The move is aimed at raising some tax revenue on that income, which would now be taxed at the current corporate rate of 35 percent if repatriated.

The White House has said more than $2.5 trillion in American profits are held offshore.