CT-N goes into reruns, debate over its future untelevised 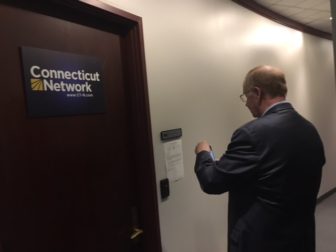 Pat Sheehan, board chairman of CPAN, takes photo of note legislature posted to his erstwhile employees.

It started so well, with mutual respect and shared ambition. But the 18-year marriage of the Connecticut General Assembly and the Connecticut Public Affairs Network ended Friday, each finally acknowledging that the growing tensions of recent months over the operation of CT-N had hardened into irreconcilable differences over money and mission.

CT-N is a cable channel owned by the legislature, funded by cable subscribers and operated with varying degrees of independence by the non-profit public affairs network, CPAN. CT-N apparently will survive the breakup. But in what form and under whose management was one of many unanswered questions as the relationship approached its official end at 5 p.m.

Based on interviews with players on both sides of the divide, it will not involve CPAN, who notified the legislature by letter Thursday evening it was ceasing operations, unable to subsist with a 50 percent cut in its funding or without the hope of change.

“They have sent us a letter,” said James P. Tracy, the executive director of the Office of Legislative Management. “And we are accepting that. And so, at five o’clock, they say they’re done. So, we are trying to get some resources to keep the lights on Monday morning and still work on a solution.”

Legislators expressed shock at receipt of the letter from CPAN, which came after several contract extensions, followed by the refusal of its counter-offer to run the system at a higher rate of compensation for another four months. The extension would give CPAN an opportunity to seek outside funding and the General Assembly time to decide if it wanted a new vendor or to get into the cable-network business.

At least for the short-term, the General Assembly will be the operator of a cable network that covers the General Assembly. It posted a hastily drafted help-wanted notice by the door to the network’s control room on the first floor of the Legislative Office Building, down a hallway lined by a collection of vending machines.

It offered the prospect of immediate employment to the freshly unemployed staff of CPAN, asking them to fill out applications at the Office of Legislative Management, up on the fifth floor of the LOB.

The immediate goal is to keep the channel alive, if only by looping older programs over and over until the legislature can hire staff to record more content for its cable network and its webcasting operation, which had been offering live coverage and a searchable archive of on-demand programming, ranging from session coverage to hearings and news conferences.

“My goal is to keep the lights on Monday morning,” said Tracy, the director of a non-partisan office who answers to the legislature’s political appointees. “We might be looping. I can’t tell you we’re going to be producing anything, but we want the network to stay on. We’re planning on looping all weekend. That’s all I can tell you, really. We’re trying to put it together.” 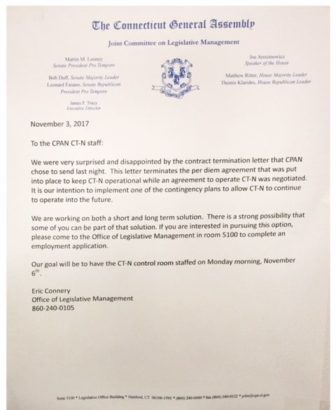 CT-N was founded as a local version of C-SPAN (not to be confused with CT-N’s operator, CPAN). C-SPAN is the national cable network that broadcasts sessions of Congress, campaign debates and a wide range of other public-affairs events. Funded by the cable industry, it operates independently of Congress.

The Connecticut Public Affairs Network was founded by Paul Giguere, who was operating a cable access channel in West Hartford, the home of Kevin Sullivan, then the most powerful legislator as president pro tem of the Senate.

Giguere said the project had backing from influential legislators from both parties in both chambers: Rep. Robert Godfrey, D-Danbury, who remains a lawmaker, and Republicans M. Adela Eads in the Senate and Brian Flaherty in the House.

CPAN was hired to design, develop and operate a cable channel that relied in its early years on fixed cameras in the House, Senate and public hearing rooms that were operated remotely. Over the years, CT-N expanded, offering closed-captions for the hearing impaired and untethered camera crews who could broadcast the formal and, more often, impromptu press conferences at the Capitol.

Its live feeds now can be watched via streaming video on smartphones.

The network always was envisioned as a window on all branches of government, including the Supreme Court across the street from the Capitol. Over time, it provided gavel-to-gavel coverage of state nominating convention and elections. With Sulllivan’s departure, CT-N lost an important advocate.

Last spring, CPAN felt it was being squeezed by new contract language making the legislature’s political staff the network’s ultimate program arbiter, erasing what from inception deliberately had been an arms-length relationship.

A red flag popped up on the first day of the 2017 session, when legislative staff for the first time sought to bar CT-N from interviewing anyone other than legislators about the state budget being proposed that day. They relented when it became clear that bad press might ensue from abruptly disinviting guests who included prominent observers of the legislature, including reporters.

“That’s just not right, saying, ‘There’s only one point of view, and it’s our point of view,’” said Patrick Sheehan, the former television anchor who has been chairman of the CPAN board for 16 of its 18 years.

Increasingly, legislative leaders and their staffs viewed CT-N as their property, a service that they paid for and should be about them and focused on them. As CPAN sought to resist tighter controls, enlisting freedom-of-information advocates, some legislators came to view CPAN as self-righteous and too sensitive in an era of limited resources.

Other states with similar networks are operated by public television stations, colleges or the legislatures. CPAN had tried and failed to convince the legislature to provide a dedicated source of funding with a fee of 40 cents on cable subscribers. (The subscribers now support CT-N indirectly by paying a gross receipts tax, a small portion of which is “intercepted” on behalf of the network.

Sheehan acknowledged that CPAN was a vendor for the legislature, not an owner of CT-N.

For the better part of 18 years, the relationship worked. That changed early this year, when the legislature published a request for proposals with more restrictive governance language. CPAN was the only bidder, entering into negotiations over budget and governance.

While Sheehan insists the bigger issue was control over CT-N, money was a significant problem and, ultimately, a catalyst in CPAN’s decision to end operations.

Without planning or consultation last month, the legislature included a provision in the budget that grabbed half of the $3.2 million in cable subscriber money that had been going into an account for CT-N, placing the revenue in the General Fund for other uses.

Not all the $3.2 million was available for CT-N operations. The network had been running on a budget of less than $2.8 million, with the rest set aside for maintenance of aging equipment. CPAN had accepted a cut of $400,000 to $2.4 million, savings realized by shedding a weekly Capitol Report show and other programming.

Cutting the CT-N revenue intercept from the gross receipts tax from $3.2 million to $1.6 million came without warning, appearing as a line in the bipartisan budget passed last month and signed Tuesday by Gov. Dannel P. Malloy. With the money set aside for maintenance, the annual operating budget effectively was cut to $1.2 million, Sheehan said.

Malloy and Lt. Gov. Nancy Wyman offered Friday to redirect $400,000 to CT-N. It appeared to be too little, too late. The Office of Legislative Management is not reopening talks with CPAN.