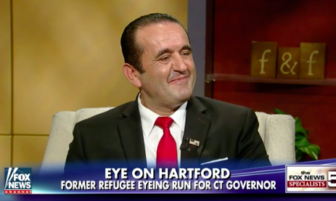 Peter Lumaj during an interview on Fox & Friends.

Peter Lumaj, an Albanian political refugee who has twice run unsuccessfully for statewide office in Connecticut, ended his year-long testing of the waters for a third campaign Wednesday and filed papers declaring himself to be a candidate for the Republican nomination for governor in 2018.

“We decided it was time to pull the trigger and give Connecticut a real conservative choice,” said Brock Webber, his campaign manager.

Lumaj, a lawyer and businessman who lives Fairfield, lost a close race to Secretary of the State Denise Merrill in 2014. He also sought the GOP nomination for U.S. Senate in 2012, but was not on the ballot for a primary won by Linda McMahon over Chris Shays.

An exploratory campaign committee he opened a year ago had raised nearly $375,000 as of Sept. 30, the end of the latest reporting period. Much of the money came from the Albanian community in New York.

Webber said he believes at least $150,000 will count toward the $250,000 threshold to qualify for public financing. Qualifying contributions can be no more than $100, and 90 percent must come from Connecticut donors. Exploratory committees can accept maximum contributions of $375.

Lumaj is now one of nine declared Republican candidates for governor who have demonstrated either a strong fundraising capability — or an ability to self-fund.

Suggs was chosen by the General Assembly in March 1993 to fill the unexpired term of Treasurer Francisco L. Borges, who resigned for a job in the private sector. Suggs lost in 1994 to Republican Christopher B. Burnham, the last member of the GOP to win an election for treasurer.

If there was any doubt about his intentions for 2018, Senate President Pro Tem Martin M. Looney, D-New Haven, took a step toward dispelling them Tuesday by a creating a committee to begin raising money for his re-election. It’s been an eventful year for Looney, who had a kidney transplant in December and a hip replacement in June.

With an 18-18 Senate, the only edge Democrats had was the tie-breaking ability of Lt. Gov. Nancy Wyman, a Democrat who is not seeking re-election.

Dennis Schain of Manchester, who retired recently as the communication director for the Department of Energy and Environmental Protection, has created a candidate committee to seek the Democratic nomination in the 4th Senatorial District.

The seat is now held by Sen. Steve Cassano, D-Manchester, who had mixed feelings about running in 2016. Schain, a former reporter and corporate communications specialist who briefly was the spokesman for Gov. M. Jodi Rell, says Cassano encouraged him to begin fundraising.

Sen. Joan V. Hartley, D-Waterbury, one of three Democrats in the Senate who broke ranks and joined with the Republicans to block passage of a Democratic budget, apparently is not feeling that estranged from the Democratic caucus. She, too, has created a re-election committee.

And yes, she checked the box to run again as a Democrat.

Ken Gucker, the Democrat who unsuccessfully challenged Sen. Michael McLachlan, R-Danbury, last year, has filed papers to take another run at McLachlan in 2018.

Former state Rep. Christine Rosati Randall, D-Killingly, who was unseated last year in a lopsided loss to Republican Anne Dauphinais, also has created a candidate committee, a first step toward an attempted comeback.

Their race could be a test of the degree to which Donald Trump helped Dauphinais in 2016 and the extent to which he may be a liability in 2018.

Rep. Bill Simanski, R-Granby, won by just 36 votes in 2010, but was unopposed in 2016. Not so in 2018. Democrat Amanda Webster, a member of the Connecticut Coalition to Regulate Marijuana, has filed papers to begin raising money.