Laffer prescribes tax cuts, and his friend Bob, to the CT GOP 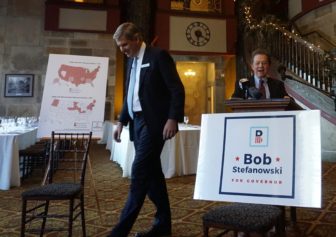 Bob Stefanowski yields the microphone to Arthur Laffer, a promoter of supply-side economics.

Arthur Laffer, a pitchman for supply-side economics in Washington under Ronald Reagan and more recently for Donald Trump, expanded his portfolio Monday by taking on the twin causes of Connecticut’s anemic economy and the gubernatorial ambitions of a friend and political newbie, Bob Stefanowski.

With Laffer by his side, Stefanowski promised to follow the economist’s standing prescription of more than 40 years for jump-starting an economy: Slash taxes. Stefanowski says he would do that over time by phasing out taxes on wages, corporate profits and inheritances, leaving the sales tax as the primary means of funding state government.

“I’ve spent a career turning organizations around, and if you think about the state of Connecticut right now, it is an absolute organization that needs to be turned around,” said Stefanowski, a former senior executive at UBS Investment Bank and General Electric who has put up $250,000 of his own cash as seed money for his campaign.

Laffer, 77, an early and enthusiastic proponent of growing the economy through tax cuts, was one of four economists who advised the Trump campaign and ignited the president’s push for tax cuts with an op-ed piece in April. Two days later, Trump surprised aides by telling The Associated Press, “I shouldn’t tell you this, but we’re going to be announcing, probably on Wednesday, tax reform.”

Laffer, a Yale graduate with a Stanford doctorate in economics, is spending the week in Connecticut, the celebrity attraction for a little-known candidate trying to get Republicans to join him in a series of economic talks over meals. Laffer and Stefanowski addressed reporters at the Society Room, a downtown Hartford meeting venue set for one of the candidate’s introductory luncheons with potential supporters.

Practicing what he preaches, Laffer fled California a dozen years ago for Tennessee, a state he says is thriving following his formula of low taxes and provides a blueprint for Connecticut.

“We have been to the future, and it works,” he said.

Laffer defended the tax cuts proposed by Trump and congressional Republicans against findings by the Congressional Budget Office and the Joint Committee on Taxation that they would add more than $1 trillion to the deficit over ten years. He said those staffs do not appreciate how much activity the tax cuts would produce.

He shrugged off scathing accounts of the failure of tax cuts to generate growth in Kansas, including a damning piece in Forbes:
“The Great Kansas Tax Cut Experiment Crashes And Burns.” He said the cuts were too little, not too much.

Stefanowski, one of nearly a dozen Republicans who have raised significant funds in pursuit of the GOP nomination in the open race for governor next year, has known Laffer for 20 years and credited him as the inspiration for “An Economic Plan to Rebuild Connecticut,” a 10-page document he shared Monday.

Foremost among Stefanowski’s challenges in selling sweeping tax cuts is getting past the chicken-and-egg question confronting any supply-sider running for governor of a state facing chronic revenue shortages: How to slash taxes when the next governor is already projected to inherit a deficit of $1.9 billion?

Even most ardent believers in supply-side economics concede that economic growth from tax cuts is not instantaneous. And unlike the federal government, states cannot engage in deficit spending in the belief lower taxes eventually will produce new revenue through economic growth.

A bigger challenge for Stefanowski — one that he could not meet Monday — is to explain how the state is going to capture revenue off that growth if it does occur, since he insists the sales tax rate would remain unchanged at 6.5 percent — lower than it was before passage of the income tax in 1991, an act Laffer identifies as a root cause of Connecticut’s economic slide.

The sales tax generated $4.2 billion in the 2016 fiscal year,  just 25 percent of the state’s total tax collections of $16.4 billion. The income tax generated $9.2 billion, the single largest source of revenue for Connecticut.

(Non-tax funding for the rest of the state’s $20 billion budget comes from sources led by federal grants, the Connecticut Lottery and Indian gaming.)

Stefanowski called his plan “aspirational,” an effort to set a dramatic new course for a state that has had little or no net job growth since the adoption of the broad-based tax on wages 26 years ago. His audience Monday included Tom Scott, the former state senator who organized a massive tax protest in 1991, bringing tens of thousands of demonstrators to the State Capitol.

Stefanowski said he would eliminate the state inheritance tax immediately, the tax on corporations in two years and phase out the income tax in years three through eight of what he hopes would be a two-term tenure as governor. Stefanowski said the proceeds of the inheritance and gift taxes are about 1 percent of state revenue, which he says is “rounding error” in a state with a $20 billion annual budget.

But such small amounts bedeviled legislators as they struggled to produce a balanced budget, a task they didn’t complete until Oct. 26, nearly four months after the start of the fiscal year. It already is projected to be more than $200 million out of balance.

Stefanowski said the inheritance and gift taxes cost the state more than they bring in by encouraging retirees to leave. 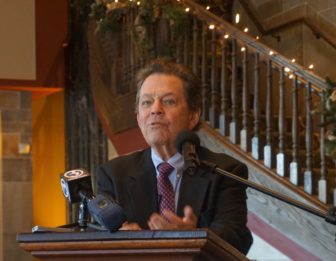 On the spending side, his plan promises zero-based budgeting, starting with “a ‘blank piece of paper’ — not an already bloated budget with special interests and sacred cows baked in. You only add back essential services while finding innovative ways to do things better and more cost-effectively.”

He conceded that one problem with zero-based budgeting is that relatively little of the state budget is truly discretionary. One of Connecticut’s biggest fiscal challenges is paying down the unfunded liability for pensions owed to retired state employees and teachers. Eighty percent of the state’s contributions for pensions is required just to catch up on contributions skipped in the past.

The candidate hedged when asked if that indicated a willingness to try to cut benefits for retirees, saying he had not gone into that level of detail in studying the unfunded pension liability. But when pressed, he replied, “That would be absolutely the last place I would go.”

Stefanowski said he would privatize the Department of Motor Vehicles and “consider public-private partnerships” to raise money to improve public infrastructure, which would involve providing investors an ownership interest in state properties, such as its airports.

He is opposed to using tolls to raise money to improve the state’s aging highways and bridges.