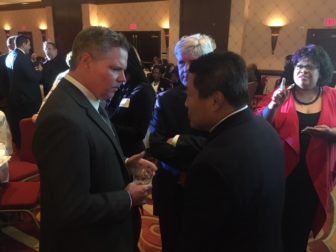 Trumbull — The chief executive officer of MGM Resorts International courted a business audience Tuesday night, asking them to join him in lobbying the General Assembly next year for legislation ending the gaming monopoly enjoyed by two Indian tribes and allowing MGM to provide Bridgeport with the “life-changing opportunity” of a waterfront casino.

“This could be one of my crowning achievements,” said James Murren, the CEO and chairman of MGM. He played up his local roots, mentioning his birth at St. Vincent’s Hospital in Bridgeport and nodding to his mother, Jean, and other family members seated at a table in the sold-out annual dinner of the Bridgeport Regional Business Council.

His tribal gaming competitors, the Mashantucket Pequot and Mohegan tribal nations, launched a pre-emptive digital advertising campaign hours earlier, the harbinger of yet another debate at the State Capitol over Connecticut’s willingness to compete for gamblers’ dollars with New York, Massachusetts and Rhode Island.

Murren said MGM is game for a long slog, ready to make the case that Connecticut must either expand gaming or accept that its slots revenues from Foxwoods Resort and Mohegan Sun will continue to slide. From a high of $430 million in 2007, they fell to $265 million last year and are projected to keep shrinking.

In September, MGM unveiled plans for a casino on the Bridgeport waterfront at a press conference attended by legislators, Mayors Joseph P. Ganim of Bridgeport and Toni Harp of New Haven, union members and a local partner who owns the site, Robert W. Christoph.

The tribes won a major victory over MGM three months earlier, winning legislation allowing them to jointly develop a casino off I-91 in the Hartford suburb of East Windsor. It is to blunt the loss of business to the MGM resort scheduled to open next year over the state line in nearby Springfield.

But the East Windsor project has been stalled by the refusal of the Bureau of Indian Affairs to act on amendments to their gaming compacts with Connecticut. The state’s approval is  contingent on BIA’s acceptance of the amendments, which would guarantee that the new casino off tribal lands would not jeopardize a deal struck in 1993.

In return for Connecticut allowing slots and promising exclusive rights to casino gaming, the tribes have been paying the state 25 percent of their gross slots revenue. Murren said the state could do better allowing a Bridgeport casino, even with New York poised to broaden its gaming industry beyond electronic-only gambling in Yonkers and Queens.

“There will be table games, I think, in Queens, in Yonkers and maybe a third New York City location, certainly within the next four years, if not sooner,” Murren said.

“The question for Connecticut becomes what do we do with this information that we have?” he said. “Casinos are opening up in Massachusetts. They’ve expanded in Rhode Island. Table games are coming to New York. What does Connecticut do about that? They can wish it away and hope it doesn’t happen, which is not logical. Or it could address this.”

The tribes’ digital ad quoted Murren’s conference call with industry analyst in which he said the Springfield project was MGM’s last major development.

“Connecticut isn’t getting an MGM casino,” the ad says. “Connecticut’s getting played.”

Murren said he was referring in the conference call to projects in states where gambling licenses were legal and available. Not only is MGM pursuing casino legislation in Connecticut, it is lobbying the Georgia legislature.

Over the past two years, when MGM was trying to block the East Windsor project, it had a strong incentive in suggesting Connecticut would be better off by allowing expansion in Fairfield County. Andrew Doba, a spokesman for the tribes’ joint venture, could not precisely say how MGM would benefit now by faking an interest in Bridgeport.

“It muddies the waters,” said Doba, a former communication director for Gov. Dannel P. Malloy. “They would say and do anything they can.”

The tribes are not seeking any legislation next year that would be undermined by the prospect of a Bridgeport casino.

Murren did not directly address the tribes’ digital ad in his speech, instead telling his audience that his opponent in the past “was a lack of information or outdated information.”

He was accompanied by Uri Clinton, the vice president and legal counsel who has overseen MGM’s lobbying in Connecticut, and a local team that included a publicist, a lobbyist and Roy Occhiogrosso, a former strategist for Malloy now advising MGM on a campaign to break into a market valued by its proximity to New York City,

Murren said his company has worked on much longer campaigns to win the legalization of casino gambling.

“I’ve been working on Japan for 15 years. Georgia has debated gaming off and on for ten. I don’t know know how long this process will be,” he said of Connecticut. “I’m not an impatient person. I feel the best approach is a thoughtful approach, however long that takes.”