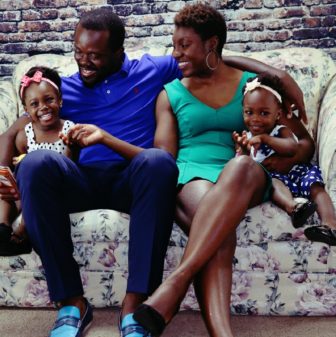 Dionne Kotey with her fiancé and their two daughters.

Washington – A program that provides health care to about 17,000 Connecticut children and teenagers has become a victim of Washington’s bitter partisan war, and the state is expected to tell thousands of families that coverage for those children may end at the end of January.

But Connecticut, and most other states, have been able to keep the program, known as HUSKY B in Connecticut, going by using unspent funds from the past two years.

Those funds are projected to run out on Jan. 31 unless Congress acts, and right now lawmakers are mired in a partisan fight that has escalated with the GOP’s approval of a new tax bill and differences over the federal budget.

Dionne Kotey, 27, of Waterbury, has two daughters — 2 and 4 — who are both CHIP recipients.

“I am very nervous because right now the co-pay is $10 per appointment and that’s affordable to me,” said Kotey, who works for a nonprofit organization and will complete her master’s in public health at the end of the month.

Kotey is the family’s sole provider. David Quenah, her fiancé and her daughters’ father, just graduated from college and is looking for a job.

“We would be stretched very thin on our budget,” she said. “We’re living month to month.”

In a meeting with President Donald Trump on Thursday, Senate Minority Leader Charles Schumer, D-N.Y., and House Minority Leader Nancy Pelosi said CHIP funding is among Democratic priorities in any deal with Republicans on a new federal budget.

“Democrats continue to press for action on the urgent, bipartisan priorities before Congress: to strengthen our national defense with parity for our domestic budget, to fund veterans and the fight against opioids, to address CHIP and Community Health Centers, to save Americans’ endangered pensions, and to pass the DREAM Act,” the Democratic leaders said in a joint statement.

The HUSKY B program covers children whose families earn too much money to qualify for Medicaid, providing health care for children for families of four earning up to $79,458 a year. It is funded largely through federal dollars, with a smaller contribution – 12 percent — by the state.

Gov. Dannel P. Malloy told legislative leaders last week that the Department of Social Services will be sending letters to parents of children enrolled in the program, warning them health coverage will end on Jan. 31 unless Congress acts. Those letters are expected to go out at the end of next week.

The letter also outlined DSS’s plan to review CHIP enrollees to see if they are eligible for Medicaid or health insurance through Access Health CT, the state’s Affordable Care Act exchange. A second letter will be sent to families with the review’s results.

“This will undoubtedly be disruptive and alarming to those receiving notices — and then possibly losing coverage — and we should all be prepared for the fallout,” Malloy wrote.

Last month, the U.S. House approved a bill that would authorize funding for CHIP, and the nation’s community health centers.

But the bill was opposed by most Democrats because it would authorize payment for CHIP and the community health centers by stripping money from an Affordable Care Act public health fund. That Public Health and Prevention Fund is used by the federal Centers for Disease Control and Prevention and state health departments for immunizations and screenings and to tackle a number of public health issues, ranging from diabetes to suicide.

Connecticut received nearly $9 million from the fund this year, which helped pay for a number of public health programs.

The House bill would require the wealthy to pay more in Medicare taxes to raise additional money for CHIP. And it would shorten the “grace period” in the Affordable Care Act during which consumers can pay late health insurance premiums from 90 to 30 days.

The Senate Finance Committee has approved a bill that would reauthorize CHIP funding, but does not have a way to pay for it.

Last weekend, Sen. Orrin Hatch, R-Utah, the head of the Finance Committee, caused a stir when he indicated the Senate could not afford to fund the program.

“We’re going to do CHIP, there’s no question about it in my mind,” Hatch said. “It has to be done the right way. But we — the reason CHIP is having trouble is because we don’t have money anymore.”

According to the Medicaid and CHIP Payment and Access Commission, a congressional agency that advises lawmakers on those programs, projected spending on CHIP in Connecticut in the 2018 federal fiscal year, which began on Oct. 1, is about $81 million. But the state had only about $15 million in leftover funds from previous years at the start of that fiscal year.

Both the House-passed bill and the one approved by the Senate Finance Committee would extend a 23 percent increase in funding for the program that was included in the Affordable Care Act through 2019 and begin to ratchet that “bump” down in 2020. The increase would be 11.5 percent in 2020 and eliminated in 2021.

On Friday, nearly 100 House members urged the Senate to pass a final bill, and for the House to drop its insistence that CHIP be paid for by cuts to other health programs.

“CHIP is a critical program that provides health coverage to millions of children and must be reauthorized immediately,” the lawmakers wrote to House Speaker Paul Ryan, House Minority Leader Nancy Pelosi, Senate Majority Leader Mitch McConnell and Senate Minority Leader Chuck Schumer. “It does not make sense, however, to pass any legislation that simultaneously harms children and families by undermining other important health programs. No one should have to lose coverage for others to maintain it.”

Everybody in, especially those left out

New Haven at a zoning crossroads

My father should have had options