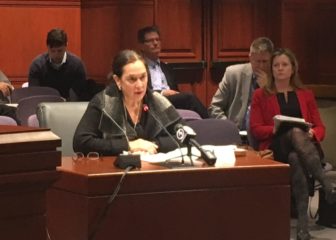 Department of Children and Families Commissioner Joette Katz testifies before the Committee on Children about the death of a nonverbal Hartford teenager with autism.

Lawmakers questioned the commissioner and other top officials of the Department of Children and Families, sharply at times, during a hearing Tuesday on the agency’s actions before a nonverbal Hartford teenager with autism died from starvation and physical abuse earlier this year.

The hearing followed a critical report from the Office of the Child Advocate last week on the circumstances that led to 17-year-old Matthew Tirado’s death in February. The report pointed to insufficient efforts by the Department of Children and Families (DCF), Hartford Public Schools and the juvenile court before the tragedy.

Matthew had been absent from school for months and his mother had been known to DCF for years.

DCF withdrew a neglect petition to the court and closed its case file on Matthew just weeks before he died. The child advocate’s report noted no orders were sought by DCF or Matthew’s court-appointed attorney to keep the case open until he was found or to seek commitment of him or his sister to state custody.

The hearing by the Committee on Children also came on the heels of an afternoon court appearance by Katiria Tirado, Matthew’s mother, who has been charged with manslaughter and intentional cruelty to persons in connection with her son’s death.

Child Advocate Sarah Eagan said the overall theme of her report was that all child-serving systems that worked with Matthew needed to improve their capacity to protect and serve children with complex disabilities.

DCF Commissioner Joette Katz steadfastly asserted her department is legally restricted from making contact with a child if their parent refuses access —unless there is evidence of physical abuse or that the youth is in imminent danger.

Katz said DCF was only aware of Matthew’s educational neglect, and officials first became privy to his physical abuse after his death.

“Matthew’s mother legally denied access to Matthew, thereby denying DCF the ability to know of the abuse she was inflicting,” Katz said.

The commissioner repeatedly maintained that the department’s hands were tied and that the legislature should adopt measures to give DCF more authority and access to children in such situations. 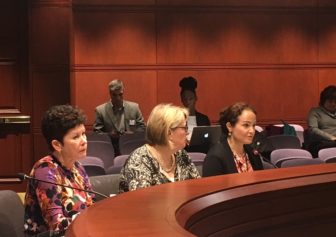 Child Advocate Sarah Eagan, right, testifies before the Committee on Children on the death of a nonverbal Hartford teenager with autism.

But Eagan traced DCF employees’ failure to follow up on several indicators that she said should have caused them to dig further, including his chronic educational neglect, lack of a medical record and 2014 allegations by Matthew’s younger sister that her brother had been hit by their mother and she was scared to go home.

Those allegations surfaced after Hartford schools had reported that Matthew’s sister had come to school with signs of physical abuse.

“We think that there were additional court orders that could have been issued up to and including the commitment of Matthew to the custody of DCF that don’t require a showing of imminent physical harm,” Eagan said, noting she felt protective supervision was ended in an inconsistent manner.

Republican Sen. Len Suzio of Meriden said he was shocked by the systemic failures across the multiple agencies involved and questioned Katz on her department’s decision to vacate the court order.

“It’s like when you got on third base you stopped from trying to get home, and I don’t understand that other than I can only speculate … you probably gave up, threw your hands up and said, ‘Where can we go with this’,” Suzio said.

“To me that’s where I find it problematic, that running into a wall of resistance should have just made, I think, the department more determined to find out what’s going on,” he said.

Katz said at a certain point DCF can’t “legally do more than we’ve already done, so leaving a case open for the sake of leaving it open … it becomes I think a quandary and so ultimately it’s through that lens.”

Other legislators questioned the officials on why an arrest warrant was never issued for Matthew’s mother after she failed to appear in court seven times, why social workers were insufficiently aware of the Tirado family’s extensive history with DCF, and whether anyone from the department had communicated with people other than Matthew’s mother.

Rep. Diana Urban, House chair of the committee, said children with developmental disabilities are much more vulnerable than other youths, and state officials need to continue to bring attention to that.

“With a department that has 15,000 cases that they’re dealing with, something like educational neglect doesn’t rise to the top of the pile,” Urban said. “That being said, and I’m going to call it chain of custody, as the case gets handed from one case worker to the next case worker, there were things that got missed.”