Malloy tight-lipped on whether he will propose tolls 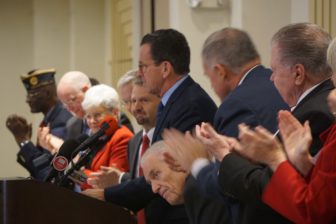 Cromwell — Gov. Dannel P. Malloy told a business audience Wednesday that saving the Special Transportation Fund from insolvency is an urgent issue for the General Assembly, but he was coy about whether he intends to propose tolls, a gas tax increase or any other solution in the final budget he’ll propose in February.

In his annual holiday speech to the Middlesex County Chamber of Commerce, the governor said the daily traffic jams on I-95 and the quality of Metro North commuter service through Fairfield County are a drag on economic growth throughout Connecticut.

“If you can’t go through Fairfield County, you can’t get to Middlesex County,” Malloy said.

Malloy, who is not seeking re-election to a third term in November, has refused to endorse tolls without a constitutional amendment guaranteeing the new revenue would go for transportation, a necessary  ‘lockbox” in the governor’s view. Voters will have a chance to approve such an amendment in November.

The legislature gave final approval in June to a resolution that would place the amendment before voters next fall. Malloy had asked them to do so a year earlier.

Malloy, a Democrat, said he was dismayed that Republican candidates for governor who spoke at a forum on transportation recently failed to outline an approach to funding transportation. Nine of the 10 candidates offered little in the way of addressing how to keep the fund solvent.

The special transportation fund, which is supported by fuel taxes, is used to pay debt service on borrowing for projects to maintain and improve the state’s highways, bridges and mass transit systems. The fund is projected to hit empty in 2022.

The state’s per-gallon gas tax was cut in 1997, resulting in a cumulative loss of $4 billion since then. In 2012, the legislature capped how much money could be raised by its other fuel tax, an 8.1 percent levy on the wholesale price of gasoline and some other fuels. A further complication was that oil prices fell, as did total miles driven.

In the two-year budget passed in 2015, $37.5 million was taken from the special transportation fund, resulting in increases in fares for buses and trains and reductions in highway maintenance.

Malloy pointedly acknowledged the presence of the legislature’s most prominent backer of tolls, Rep. Tony Guererra, D-Rocky Hill, during his speech to the chamber. But he declined to say later if that signaled the probability of voters passing the lockbox next fall was sufficient for him to propose new transportation revenue now.

Malloy will deliver his budget address on the opening day of the General Assembly’s 2018 session in February.