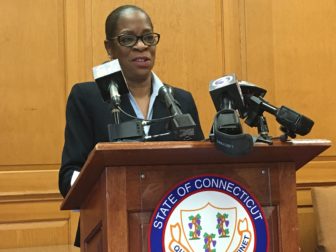 Hartford Democrat Denise L. Nappier, one of Connecticut’s longest-serving state treasurers and the first African-American woman in the nation to hold that post, announced Wednesday she will not seek a sixth term.

Nappier, 66, who won her first term two decades ago on the heels of a kickback scandal that sank her predecessor, said restoring “integrity and public confidence” in the office was among her proudest accomplishments.

A vocal advocate for greater fiscal discipline in tackling Connecticut’s massive, unfunded liabilities, the treasurer also used her influence as a major institutional investor to reshape a range of corporate policies.

“It has been my privilege and honor to serve the citizens of Connecticut and to lead an office that has consistently demonstrated the highest standards of professionalism and integrity while contributing to the well-being of Connecticut’s residents and businesses,” Nappier said during a late morning announcement in her Elm Street office.

Moving the treasurer’s office past corruption

A former city treasurer in Hartford and a former executive director of the Riverfront Recapture initiative in the capital city, Nappier first was elected treasurer in 1998, unseating Republican incumbent Paul Silvester of West Hartford in a tight race.

Silvester soon became embroiled in an investigation of an investment kickback scheme during his time as trasurer that would result in his conviction and imprisonment.

“It was a time like no other in the history of this office,” Nappier said, adding that she and her staff spent much of the first year in office working with federal investigators.

“We rolled up our sleeves and got to work developing a comprehensive treasury reform plan to ensure that professionalism would replace personal gain in the business of the treasury.”

Nappier also would spearhead the Treasury Reform Act, a 2000 statute eliminating the finders’ fees that were central to the Silvester scandal and establishing greater transparency in pension investments.

The nonprofit Center for Public Intergrity ranked Nappier’s office first in the nation in 2015 for pension fund management.

Using the ‘financial clout’ of the treasury

As state treasurer, Nappier is the sole fiduciary responsible for overseeing investment of state funds, including roughly $30 billion in pension accounts.

The treasurer said she tried to wield Connecticut’s “financial clout” as a major institutional investor to shape a wide range of corporate policies, including executive compensation.

In 2004, she was one of eight state treasurers who called on the SEC to require better disclosure of global-warming risks in corporate filings.

“For nearly 19 years, this office has promoted the protection of shareholder value and the rights of consumers and workers by strengthening accountability and pursuing prudent and responsible business practices,” Nappier said.

“What has been equally important for me has been using the financial clout of the treasury to expand economic opportunity, not just for a few, but for all people,” she added.

In 2005, she backed the creation of a $100 million Housing Trust Fund to help finance affordable housing.

Gov. Dannel P. Malloy said, “Denise Nappier’s public service and dedication to the state of Connecticut is second to none.  … There is no doubt that she will leave big shoes to fill, but I know that Connecticut is better off thanks to her years of leadership.”

Lt. Gov. Nancy Wyman said that, “By pushing through gender and race barriers, her leadership also sets an example for the next generation.”

Shoring up the teachers’ pension fund

The treasurer, along with former House Speaker James Amann, D-Milford, led a push in 2007 to borrow $2 billion to bolster the cash-starved pension fund for municipal teachers.

That initiative remains a focus of intense debate because of the high rate of investment return Connecticut assumed at the time for its pension fund. The state bonded $2 billion at roughly 5.8 percent for 25 years, but assumed this would be offset by an average annual return on pension investments during this period of 8.5 percent.

Nappier, whose office does not set the investment rate assumptions on pension funds, has advocated for more realistic rates. Connecticut recently lowered the assumed rate of return on the teachers’ pension to 8 percent.

Another key part of that 2007 teachers’ pension initiative was that Connecticut promised in the bond covenant — its contract with investors who bought those bonds —  to budget the full pension contribution required by analysts for the entire 25-year life of the bonds.

Connecticut’s pension plans and trusts combined have risen in value during Nappier’s tenure from $19 billion to $34 billion, despite having to pay out $25.2 billion in benefits during that period.

The state’s pension and other retirement benefit programs suffer from more than seven decades of inadequate savings habits, a problem Nappier frequently spoke out against.

“What I said from day one remains true: There is no investment portfolio composition that could generate investment returns sufficient to compensate for reduce contributions, lost investment opportunity and sustained market volatility,” she said.

Nappier’s next step is undecided

The treasurer said she first began to question how long she wanted to remain on the job during her 2010 campaign, but decided there still was work she wanted to do in public office.

Six years later, she added, it became clear that “it was time.”

Nappier said she does not plan to retire when her term ends about 12 months from now, but she doesn’t anticipate running for public office again.