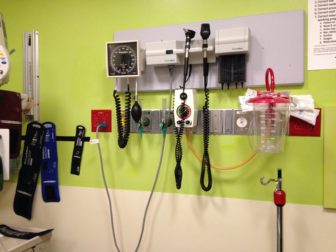 As the federal government penalizes 751 hospitals for having too many infections and patient injuries, some states are feeling the cuts in Medicare payments more than others.

This year’s punishments landed the hardest in Connecticut and Delaware, where Medicare penalized half of the evaluated hospitals, federal records show. In New York and Nevada, four in 10 hospitals were penalized. A third were punished in Rhode Island and Georgia. (These figures do not include specialty hospitals automatically exempted from penalties: those serving veterans, children and psychiatric patients, and “critical access” hospitals that are the only institutions in their area.)

While every state except Maryland — which is excluded because it has a different Medicare payment system — had at least one hospital punished, some got off comparatively lightly. Sixteen percent of hospitals or fewer in Alabama, Kansas, Massachusetts, Missouri, Ohio, Texas and nine other states were punished. (State summaries are below; a searchable list of individual hospitals penalized is here.)

The penalties — now in their fourth year — were created by the Affordable Care Act to drive hospitals to improve the quality of their care. Each year, hundreds of hospitals lose 1 percent of their Medicare payments through the Hospital-Acquired Conditions (HAC) Reduction Program.

The program’s design is stern: Out of the roughly 3,300 general hospitals that are evaluated each year, Medicare must punish the worst-performing quarter of them — even if they have reduced their number of potentially avoidable mishaps from the previous evaluation period.

“I have seen with my own eyes the improvement,” said Dr. Amy Boutwell, a quality-improvement consultant in Massachusetts. “I hear hospitals say straight up, ‘We don’t want to be in the lowest quartile, we want to get out of the penalty zone.’”

The conditions Medicare considers include rates of infections from colon surgeries, hysterectomies, urinary tract catheters and central line tubes inserted into veins. Medicare also examines rates of methicillin-resistant Staphylococcus aureus, or MRSA, and Clostridium difficile, known as C-diff. The frequency of 10 types of in-hospital injuries, including bedsores, hip fractures, blood clots, sepsis and post-surgical wound ruptures, are also assessed. All these types of potentially avoidable events are known as hospital-acquired conditions, or HACs.

A mix of factors contribute to why more hospitals are punished in certain states. The penalties fall more frequently on teaching hospitals and hospitals with large portions of low-income patients. There are more of those in some states than in others. Some penalty recipients say Medicare isn’t adequately taking into account differences in patients, since those who are frailer are more susceptible to HACs.

There is also some element of statistical chance, since the number of reported conditions in one hospital on the edge of the bottom quartile might just have one or two more incidents than a hospital that narrowly escapes that designation.

Some repeatedly penalized hospitals, such as Northwestern Memorial Hospital in Chicago, say the program is flawed by what researchers call surveillance bias: The hospitals that are most diligent in testing and treating infections and injuries are going to appear to have more than comparatively lackadaisical institutions. The hospitals are responsible for reporting incidents to the federal government.

Medicare says it performs spot-checks, but Dr. Karl Bilimoria, director of the Surgical Outcomes and Quality Improvement Center at the Northwestern University Feinberg School of Medicine, said more policing is needed for the rates to be credible.

“In no other industry would this pass, where a program without an audit and voluntary data reporting would be considered valid,” Bilimoria said. “We know guys are gaming.”

Still, many hospitals that have large numbers of sicker and low-income patients, or that handle more complex cases, have avoided the penalties. Medicare issued no punishments this year to Cedars-Sinai Medical Center in Los Angeles; the Cleveland Clinic; Intermountain Medical Center in Murray, Utah; Massachusetts General Hospital in Boston; or New York-Presbyterian Hospital in Manhattan. While safety-net and teaching hospitals were penalized at a higher rate than other hospitals, two-thirds of each group escaped penalties this year.

Dr. Kevin Kavanagh, board chairman of Health Watch USA, a patient advocacy group, said that most hospitals are reducing their HACs each year, in part because of the penalties.

“That’s really the bottom line that everyone should support,” he said. “No system is perfect.”

This story was first published Jan. 5 by Kaiser Health News, a national health policy news service. It is an editorially independent program of the Henry J. Kaiser Family Foundation which is not affiliated with Kaiser Permanente.