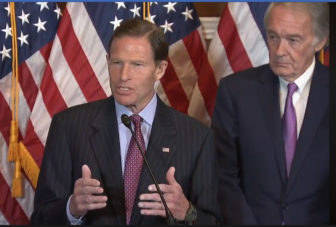 Approval of the legislation is not assured in the Senate, which has a 51-vote GOP majority. But on Monday afternoon, Sen. Susan Collins of Maine became the first Republican to voice support for the bill, boosting the chances of Senate passage.

Democrats see political value in forcing Republicans to take a stance on the issue. Polls have found that a large majority of the public oppose the rollback of the Obama administration’s net neutrality rules.

“There will be a political price to pay for those who are on the wrong side of history,” said Sen. Ed Markey, D-Mass., the chief sponsor of the bill.

“The FCC has proven itself to be a puppet of special interests,” Blumenthal said at a Tuesday press conference in the U.S. Capitol with other bill supporters.

Markey and Blumenthal said the FCC’s move has unleashed a wave of concern among millennials who value an open internet.

“The reaction of all of our children is a great big ‘duh,’” Blumenthal said. “What is there to argue about when it comes to freedom of the internet?”

The legislation would use authority under the Congressional Review Act, or CRA, to block the FCC’s repeal of the Obama-era rules from going into effect as expected in several weeks.

Those who support the FCC’s rollback of the Obama-era rules say lifting those restrictions increases competition. drives innovation and inspires giant companies like Verizon and Comcast to take more risks and invest more capital in building out networks

But the FCC’s move has provoked a firestorm of controversy.

Blumenthal said there is a second front in the fight against the FCC’s actions.

“Not only has the FCC woken a slumbering giant, but it has also triggered a legal fight,” Blumenthal said.

“Right after this final rule is filed in a few weeks, there will be a court case…because the FCC is fundamentally violating the law, it is showing its contempt on the rule of law. And that is undemocratic and unamerican.”

Blumenthal also said , “This new action is doomed to fail.”

This story was updated at 6:40 p.m. with Republican Sen. Susan Collins’ support for the bill.