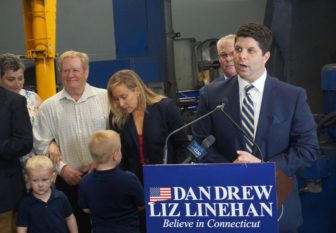 Liz Linehan took a moment with her restless sons as she was introduced by Dan Drew.

The gubernatorial campaign of Middletown Mayor Dan Drew is teetering with more debt than cash and the prospect of new competition for the Democratic nomination from two fundraising juggernauts, Hartford Mayor Luke Bronin and Susan Bysiewicz, and a third candidate with the resources to self-fund a campaign, Ned Lamont.

“We’ll see how things go,” Drew said Thursday, when asked if he could continue his campaign. “Sometimes your money is tight, and other times it’s flush.”

Bronin raised $113,710 in less than a month as an exploratory candidate. Bysiewicz, who has shifted the focus of her exploratory campaign in recent months from state Senate to governor, raised $105,372 in the final quarter and ended the year with $90,433 in available cash. Neither has debt.

Drew opened an exploratory campaign for governor in January, three months before Gov. Dannel P. Malloy announced he would not seek a third term. In July, Drew became the first Democrat to declare his candidacy.

But he has struggled, spending money as quickly as he raised it.

In October, the Hartford Courant called in an editorial for Drew to quit the race over a fundraising letter sent to city employees, including police officers whose home addresses were not public information. The editorial called it “a shakedown.” The State Elections Enforcement Commission is investigating the solicitation.

On Tuesday, he suffered the indignity of losing his seat on his city’s Democratic Town Committee. His slate lost decisively at a caucus that Rob Blanchard, a city council member on the winning slate, called a reflection of his deeper political vulnerabilities and dissatisfaction with his mayoral style.

In September, Drew took the unusually early step of naming Linehan, a first-year state representative, as his choice for a running mate in 2018. As the filings Wednesday showed, she brought no new fundraising strength to the partnership.

Drew’s exploratory committee raised and spent $177,000, none of which he was going to apply toward the $250,000 threshold needed to qualify for public financing. As a declared candidate, Drew raised $91,111.

The other Democrats in the race fared better in their fundraising.

Sean Connolly, the former veterans affairs commissioner, raised $90,830 after resigning to open an exploratory campaign in October. He became a declared candidate Tuesday.

Bridgeport Mayor Joseph P. Ganim raised $52,892 in the quarter and ended his eight months as an exploratory candidate having raised a total of $199,353. He had $99,163 in available cash last month as he became a declared candidate for governor.

Jonathan Harris, a former state senator, consumer protection commissioner and executive in the state Democratic Party, raised $62,341 in the quarter, reaching a total of $233,199. He finished the year with $36,861 in the bank.

Candidates can accept maximum donations of $375 in exploratory campaigns. Once they declare and seek public financing, they are limited to contributions of no more than $100.

Because of his corruption conviction as mayor in 2003, Ganim is barred from the voluntary public financing program. As a non-participating candidate, he can accept a maximum of $3,500.