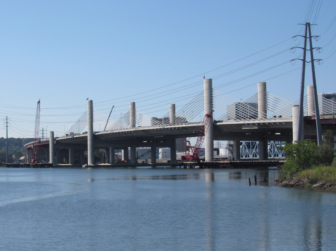 The Pearl Harbor Memorial Bridge, known as the Q bridge, which carries I-95 over New Haven harbor, was one of hundreds of Connecticut projects, large and small, that were built with earmark funds.

Washington – Reviled as corrupting and anti-democratic, congressional earmarks may have a revival because of recent comments from President Donald Trump and GOP lawmakers’ growing frustration with the budget process.

Connecticut lawmakers won hundreds of millions of dollars in money for dozens of special projects, big and small, that helped the state’s defense and manufacturing sectors, its colleges and universities, non-profit agencies, transportation and even Mark Twain’s home in Hartford.

Connecticut lawmakers interviewed for this story welcomed the return of earmarks – under certain conditions.

The debate over earmarks, or funding for special projects lawmakers insert into spending bills if approved by party leaders, was touched off when Trump told lawmakers last week that earmarks could help restore comity in Washington.

“We have to put better controls because it got a little bit out of hand,” Trump said. “But maybe that brings people together, because our system right now, the way it’s set up, will never bring people together.”

The federal government has been funded for much of the time since earmarks were outlawed in 2010 through short-term spending bills, not the regular process of moving bills through the House and Senate appropriations committees.

The ban was put in place after disgraced Rep. Duke Cunningham, R-Calif., went to jail for taking $2.4 million worth of bribes in return for securing earmarks, and Rep. Don Young, R-Alaska, used earmarks to fund an expensive “bridge to nowhere.”

“I think it’s a real interesting debate to have given the disfunction over the budget that coincided with the elimination of earmarks, ” said Rep. Joe Courtney, D-2nd District, of the new debate.

Courtney, however, said he preferred Congress’s focus this week be on reaching an agreement on a massive, “omnibus” spending bill that would fund the federal government until the end of the federal fiscal year, Sept. 30.

On Wednesday, the House Rules Committee spent hours on a hearing on earmarks, not the budget.

At that hearing, GOP supporters of the return of earmarks argued the corruption associated with the special projects has been vastly exaggerated. They also said the executive branch and federal agencies should not have control over the funds that go to their states and districts because lawmakers know local needs better.

“What are we here for if we can’t represent the people that vote for us,” said Alaska’s Rep. Young. “I love this House, and I don’t want any executive, regardless of what president, to be running the House, and that’s what occurring now.”

Conservative Republicans testified that reinstating the earmark process could hurt the ability of the GOP to keep control of the U.S. House.

“I hope Republicans can continue their  momentum and not give ourselves self-inflicted injuries,” said Rep. Mark Walker, R-N.C.,  “Yet, I fear we might be doing that just by bringing back the practice of the old, un-reformed earmarks.”

Rules of the road

Courtney helped push dozens of earmarks for Connecticut through Congress before the ban was imposed, including millions of dollars in construction money for the National Guard at Bradley International Airport and for the state’s fuel cell industry. He helped Rep. John Larson, D-1st District, with a $902,500 request for “infrastructure improvements” at Hartford’s Wadsworth Atheneum.

“I participated because those were the rules of the road,” he said.

“Looking back today, that was really critical,” Courtney said.

But Courtney is also critical of the way earmarks were used politically.

Before banning earmarks, Congress made an attempt at making the process more transparent and the requests available to the public.

Courtney said that reform isn’t enough because earmarks were also used by congressional leaders to wrest support form skittish members for certain legislation and to strengthen the hand of lawmakers who were facing tough races for re-election.

However, Larson said if the earmark requests go through the appropriations process, with disclosure, debate and votes, they should be reinstated.

“Why shouldn’t I be able to put in a bill in favor of the Atheneum or the Boy Scouts….?” Larson said.  “We should be able to be representative.”

Like many of his colleagues, Larson argues lawmakers know the needs of their states and congressional districts better than bureaucrats at federal agencies who weigh grant requests.

So did Rep. Elizabeth Esty, D-5th District, who said last fall that the elimination of earmarks was an “overreaction.”

“There’s no way that bureaucrats in Washington, D.C., could have the same fine level of sense of what is needed in the 5th District,” Esty said.

Larson said the return of earmarks would be invaluable if Congress finally considers an infrastructure  bill, helping him win funding for a proposal to tunnel I-91 and I-84 through Hartford.

Connecticut lawmakers earmarked millions of dollars for research programs at UConn, repairs at Mark Twain’s former home in Hartford, the dredging of Norwalk Harbor,  dozens and dozens of road and bridge projects, and construction at Naval Submarine Base New London.

Smaller earmarks also were used to fund non-profits like a Boys and Girls Club in Shelton and a diaper bank in New Haven.

But a study of congressional requests by Taxpayers for Common Sense, a group that opposes the return of earmarks, ranked Connecticut about average among the 50 states when it came to asking for money for local projects.

In 2010, the last year earmarks were allowed, Connecticut lawmakers put in 147 requests, totaling $128 million, which Taxpayers for Common Sense translated into $36.36 for every man, woman and child in the state.