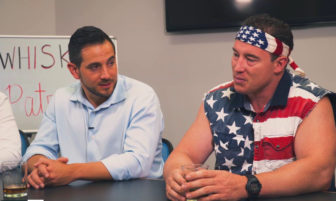 J.R. Romano, left, with Carl Higbie on an episode of Whiskey Patriots.

Connecticut Republicans, including a gubernatorial candidate who once employed him as a spokesman, quickly distanced themselves Friday from Carl Higbie, the brash former Navy SEAL from Greenwich who resigned from a Trump administration post after CNN uncovered a string of bigoted and insensitive remarks.

GOP state Chairman J.R. Romano, who occasionally appeared with Higbie on an irreverent web-based show, Whiskey Patriots, and the gubernatorial campaign of Peter Lumaj said they never had heard Higbie make comments like the ones CNN found in audio from Internet talk radio shows.

On those shows from 2013 through 2015, Higbie disparaged blacks, gays, immigrants and Muslims. He insisted Barack Obama was a Muslim born in Kenya and supported shooting undocumented immigrants at the border and stripping public assistance recipients of the right to vote.

He also dismissed three quarters of veterans suffering from post-traumatic stress disorder as malingerers trying to defraud the federal government.

“I’d say 75 percent of people with PTSD don’t actually have it, and they’re either milking something for a little extra money in disability or they’re just, they honestly are just lying,” Higbie said. 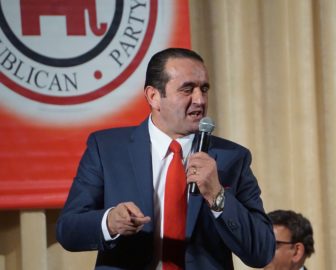 Higbie, a surrogate for Trump on Fox and CNN before the 2016 elections, had been a spokesman for Lumaj’s exploratory campaign before joining the Trump administration as the chief of external affairs for the Corporation for National and Community Service. Lumaj had embraced the connection to the administration.

“The words used by Mr.Higbie in 2013 are ignorant and not condoned in any way by Mr. Lumaj or Lumaj for CT,” said Brock L. Webber, the manager of the Lumaj campaign. “Mr. Lumaj, nor any staff or Lumaj Explore ever had an interaction with Mr. Higbie that included this type of speech or would indicate this type of behavior or thinking.”

Romano called the comments “a gross misunderstanding about multiple communities that deal with struggles.” He said they “are beyond the pale.”

“I’m sorry. I’m not sorry that my words were published, I am sorry that I said them in 2013,” he wrote. “Those words do not reflect who I am or what I stand for, I regret saying them. Last night I informed the WH that I was resigning so as not to distract from POTUS’ many success.”

Romano said it has been months since he has seen Higbie, a frequent panelist on Whiskey Patriots before joining the Trump administration.

Romano still participates in the show. It is hosted by Kyle Reyes, who drew fire from Democrats after posting a Facebook video in which Reyes questioned if the white supremacists in Charlottesville, Va., actually were actors hired by the political left.