A rising GOP star at 20, Aundré Bumgardner defects over Trump 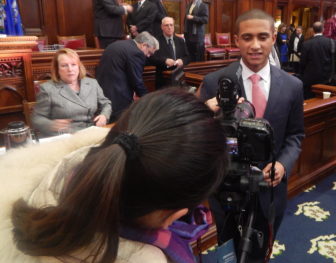 Rep. Aundre Bumgardner, R-Groton, was in demand for interviews on his first day in the legislature three years ago.

On a difficult election night for Connecticut Republicans in 2014, Aundré Bumgardner was one of the bright spots, a 20-year-old black candidate whose election to the state House gave the GOP a jolt of youth and racial diversity. He was hailed by the Republican state chairman as “part of the next generation of leaders in our party.”

Three years later, Bumgardner no longer is a member of the House or the Republican Party.

In fact, Bumgardner’s name showed up recently in the unlikeliest of places. He is listed as the campaign treasurer of the Democrat who unseated him in 2016: Rep. Joe de la Cruz of Groton. Bumgardner’s acceptance of the post underscores that not only did he exit the GOP, he is an active Democrat.

Bumgardner, now 23 and back in college, said there is no place for him in a Republican Party that tolerates the racial insensitivity of President Trump, who called for a ban on Muslim immigration as a candidate and seemed to defend white supremacists after a violent protest in Charlottesville, Va., last summer.

“It actually was Charlottesville that pushed me over the edge,” Bumgardner said. “It wasn’t even so much the words President Trump used, but more so the inaction coming from the Republican Party, not just at the national level, but to a certain extent the state and local level. Silence is absolute complicity.”

Trump was applauded by David Duke, the former Ku Klux Klan leader, after the president equated torch-carrying marchers at a protest organized by a white nationalist over the proposed removal of a Confederate statue with the counter-demonstrators who condemned them.

Trump was condemned by some congressional Republicans, but Bumgardner said they were too few. He said he heard little protest by the GOP in Connecticut, though he praised Sen. Paul Formica, R-East Lyme, and Senate GOP leader Len Fasano of North Haven as willing to speak out against intolerance displayed by the president.

Fasano, who has tried to develop an urban agenda for the GOP, spoke against Trump’s comments about Muslims during the campaign, and he recently called on the president to apologize for targeting Haitans and Africans as groups he did not want to see emigrating to the U.S.

Fasano and Bumgardner used to talk about broadening the GOP base.

“I know he was frustrated at the lack of rapid movement by the party toward embracing some of the things we were talking about,” Fasano said. “I am very, very disappointed that he made the switch. This the first time I’m hearing of it. I had hoped that he would help make the party better at getting our message to different communities. I think him leaving is a loss.”

But Fasano also said Bumgardner was wrong to leave the party over Trump, calling it “defeatist.”

“Switching from Republican to Democrat is not going to change who Trump is and what he says,” Fasano said. “Change happens at home.” 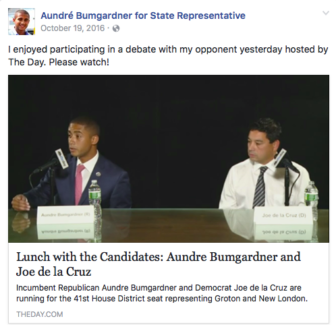 From Bumgardner’s Facebook page during his campaign against de la Cruz.

De la Cruz said his former opponent, with whom he found agreement on a broad range of issues during a campaign that never turned negative, is a young man who came to a difficult decision, someone willing to face cries of betrayal to stand on principle.

“I fundamentally believe I don’t owe a debt to the Republican Party. I owe it to the constituents,” said Bumgardner, now a member of the Democratic Town Committee in Groton. “I know it hasn’t been the most popular decision. I continue to get emails.”

Bumgardner said he was both amused and honored when de la Cruz asked him to be his campaign treasurer.

A family tragedy overshadowed de la Cruz’s political victory. His 24-year-old son, Joey, was shot and killed a month after the election while going to the assistance of a woman who was being assaulted.

“Aundré was at my door the next day,” he said.

Bumgardner later took de la Cruz to Hartford to help with the transition, a gesture de la Cruz says he never will forget.

“I was privileged to be elected at 20,” Bumgardner said. “That was an incredible honor and privilege.”

Bumgardner said he has no immediate plans, other than finishing his studies at Three Rivers Community College and applying to a four-year college in Connecticut. He declines to talk about a potential return to elective politics, other than handling the finances of his former opponent’s re-election.

Bumgardner stands with the vast majority of black Americans who disapprove of Trump. Only 9 percent of blacks approve of Trump’s performance as president, according to a recent poll by Gallup.

The only black Republican in the state legislature is Sen. George Logan, R-Ansonia, who was elected the same night Trump won and Bumgardner lost. An unaffiliated voter for much of his adult life, Logan said he felt no angst about being a Republican during the Trump presidency.

“To leave the Republican Party because of one individual, I think, is a little odd,” Logan said. “My focus is Connecticut.”

He said the policies of Gov. Dannel P. Malloy, a Democrat not seeking re-election, concern him more than the statements of President Trump. They have caused more damage to Connecticut than anything the president has said or done, Logan said.

Logan steered clear of presidential politics during his run for state Senate, when he unseated a long-serving Democratic incumbent, Joe Crisco. And he declines to say today who got his vote for president.

“I certainly voted,” he said. “I didn’t make my vote public, and I never will.”

Trump’s reported comments about Haitians and Africans were troubling, he said. “If the president did make those comments, I certainly think they were outrageous and he should apologize for it — if he made those comments,” Logan said.

Republicans generally have been wary about being drawn into controversies generated by Trump, calling them a distraction from their message that Connecticut needs change after eight years with a Democratic governor and three decades of Democratic domination of the General Assembly.

J.R. Romano, who became the GOP state chairman in 2015, said some Democrats are too quick to attack Republicans on the basis of race and an affiliation with Trump.

On Monday, Michael P. Lawlor, a former Democratic state lawmaker who is a criminal justice adviser to Malloy, referred in a tweet to Susan Hatfield, a Republican exploring a run for attorney general, as a “racist enabler,” solely on the basis of her being an early and enthusiastic supporter of Trump.

Hatfield said her first reaction to Lawlor’s tweet was, “He doesn’t know me.” Her second was that it was “cyber-bullying,” evidence of the general deterioration of political discourse.

“We’re not good role models for our children right now,” Hatfield said. “This is one example of going too far. Trump is not relevant to this.”

And what of the president’s contributions to the state of political discourse?

“I’m going to echo Sen. Fasano’s statement. I think he hit it just right. That’s not our Republican Party. That’s not what we as a group condone,” Hatfield said, referring to Fasano’s call for Trump to apologize over his reported comments about Haitians and Africans. “I think Sen. Fasano said it well when he issued that statement.”

On that, Aundré Bumgardner agrees. He just wishes he heard it from more Republicans.