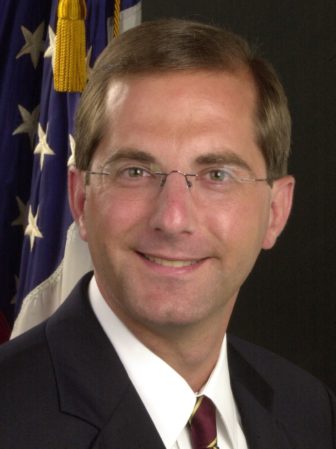 Washington – Like his predecessor, the new head of the Department of Health and Human Services, has sparked controversy and sharp criticism from Democrats, including Sens. Richard Blumenthal and Chris Murphy.

Connecticut’s senators were in the minority who voted against Alex Azar, 50, when he was confirmed by the Senate Wednesday on a largely partisan, 55-43, vote.

After he is sworn in this week, Azar will be the second HHS chief in 11 months, replacing Tom Price, who resigned over the use of costly private jets for official business.

In a speech on the Senate floor Wednesday, Murphy said he is concerned that Azar will defend Trump administration efforts to “sabotage and undermine the Affordable Care Act.” Murphy is a member of the Senate Health, Education, Labor and Pensions (HELP) Committee.

“Connecticut is a state that has efficiently, ably, and responsibly implemented the Affordable Care Act,” Murphy said, resulting in new coverage for “hundreds of thousands of people” through an expansion of the Medicaid program and federal subsidies to those who purchase policies on the state’s ACA exchange, Access Health CT.

“And so it was perplexing to those of us on the health committee that Mr. Azar seemed to defend the administration’s decisions to sabotage and undermine the Affordable Care Act, and even went so far as to try to spin those changes as strengthening the law,” Murphy said.

Last year, the Trump administration ended key ACA payments to insurers that reimbursed them for lowering co-pays and deductibles for lower-income people and supported the elimination in a new federal tax overhaul of the “individual mandate” that penalizes those who don’t have coverage.

Although he voted against Azar’s confirmation, Murphy praised him for splitting with Price on the issue of using an alternative payment method for Medicare, a shift from reimbursing providers based on how much medicine they practice to a system that rewards providers for the outcomes they achieve.

“I want to applaud Mr. Azar for his seriousness about working with Democrats and Republicans to try to shift our payment system over to something that makes more sense,” Murphy said.

Blumenthal said he opposed Azar’s nomination because he is concerned the new HHS head “promises to be another loyal foot soldier in the Trump administration’s campaign against women’s health and reproductive rights.”

“At his confirmation hearings, he refused to acknowledge the well-known fact that access to birth control prevents unintended pregnancies,” Blumenthal said in a statement. “He argued that allowing a woman’s employer to deny her coverage for needed health services is an ‘American value.’”

A new civil rights division has been created at HHS to protect health-care workers who refuse to provide contraception and other services inconsistent with their moral or religious beliefs.

Azar has promised to try to contain drug prices, a vow some question because he is a former top executive of pharmaceutical giant Eli Lilly.

“Drug prices are too high. The president has made this clear and so have I,” Azar said in his testimony before the HELP Committee last year.

Azar said he wanted to bolster competition for brand-name drugs and generics to bring down prices, but opposes allowing Medicare, the nation’s largest purchaser of pharmaceuticals, to negotiate prices with drug companies.

Azar has previous experience at HHS, the nation’s largest domestic agency that has a $1.1 trillion annual budget. He was the agency’s deputy secretary during George W. Bush’s administration.

“I can think of very few others as qualified to take the helm of this very large ship,” said Sen. Orrin Hatch, R-Utah, chairman of the Senate Finance Committee at Azar’s confirmation last week. “With experience both on the company side and the government side of health care, he is now only more experienced and knowledgeable.”