General Assembly to review its policies on sexual harassment 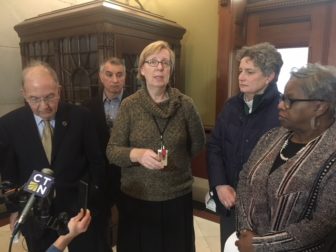 The Connecticut General Assembly is reviewing its policies for preventing and responding to sexual harassment, becoming the latest public institution to take stock of its workplace culture in the wake of scandals that have swept through the top ranks of entertainment, media and politics.

“We think in today’s climate that we have to put a critical eye to make sure we are protecting victims from sexual harassment and that we are holding people accountable who commit sexual harassment,” said Sen. Catherine Osten, D-Sprague.

The scandals over harassment and assault, which have ended political careers in Washington and sparked a MeToo movement encouraging victims to come forward, have not touched the General Assembly, though few would suggest that the state legislature has been immune from complaints of inappropriate sexual conduct.

“We have to recognize that there is a power dynamic in this building that goes on, that people up here are elected and they have power,” said Sen. Beth Bye, D-West Hartford. “I feel like even just having this hearing and saying we are concerned lets everyone in this building know and be on notice that power dynamic is not to be used to exploit.”

Legislative leaders said Thursday they are aware of no financial settlements over harassment claims by the General Assembly, unlike in Congress.

“We’re getting in front of this,” said Sen. Marilyn Moore, D-Bridgeport. “We haven’t heard anything. I don’t know of anything. I’m a female open to people coming to me with their issues.”

Senate Democrats called for public hearings by the Legislative Management Committee after a caucus Thursday, surprising members of other caucuses who had been discussing how the legislature would conduct its review.

House Speaker Joe Aresimowicz, D-Berlin, already had ordered every member and employee of the House Democratic caucus to take a sexual harassment awareness course offered by the Office Legislative Management, even if they had previously taken the training. Aresimowicz said it is an evolving area of workplace culture deserving of periodic refreshers.

Aresimowicz was one of five legislators or staff to take the course Thursday.

Spokespeople for the House and Senate GOP caucus said there was bipartisan agreement to review how the legislature responds to harassment complaints.

In 2013, then-House Speaker J. Brendan Sharkey, D-Hamden, stripped a deputy, Ernest Hewett, of his leadership post for comments made to a teenage girl at a public hearing that carried a sexual double-entendre, whether intended or not.

The Permanent Commission on the Status of Women issued a statement then saying it was important for the legislature to have “a zero tolerance policy for this kind behavior — whether unintentional or not.”

The commission no longer exists. It was merged with other legislative commissions into the Commission on Women, Children and Seniors.