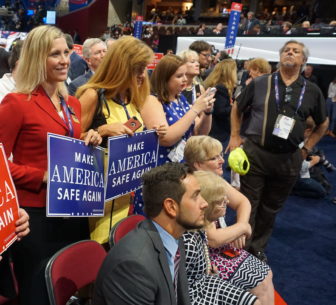 Susan Hatfield of Pomfret, left at the GOP convention.

Former U.S. House Speaker Newt Gingrich endorsed the exploratory campaign for attorney general of his former policy assistant, Susan Hatfield, in a letter that praises her work as a state prosecutor and makes no mention of the controversy generated by a Democrat’s tweet saying her support of Donald J. Trump makes her “a full-force racist enabler.”

Hatfield, who is on leave from her job as a prosecutor, said the tweet by Michael P. Lawlor, a former state legislator who is a criminal-justice adviser to Gov. Dannel P. Malloy, brought her candidacy some quick visibility and support from Republican women, a “silver lining” for a candidate exploring her first run for statewide office.

“The feedback I’m getting from people is clearly they are seeing you as a real viable candidate,” Hatfield said. She added, however, she does not attribute the tweet “to the Malloy administration.”

Gingrich’s letter and Lawlor’s tweet each are likely to be used in fundraising appeals by Hatfield, who is testing her viability to compete for the Republican nomination in the open race for attorney general. Democrat George Jepsen is not seeking re-election to the post after two terms.

“As we all know, Connecticut is in a fiscal mess,” Gingrich said in his endorsement. “Its problems require the kind of talent and skill that I know Sue possesses. She has real world experience working on tough national policy matters such as education, tax issues, and our nation’s budget. This is exactly the kind of experience and knowledge that Connecticut needs right now.”

Lawlor stands by his tweet as a comment on Hatfield’s work to elect Trump, who he views as racist. She was an early volunteer for Trump and was a delegate to the Republican National Convention.

Hatfield said Lawlor’s brother, Kevin, who is the state’s attorney in the Ansonia-Milford Judicial District, “reached out to me” over the tweet. She declined to share his message.

The Republican Attorneys General Association said they are demanding Lawlor apologize to Hatfield and the nearly 675,000 voters who cast votes for Trump.