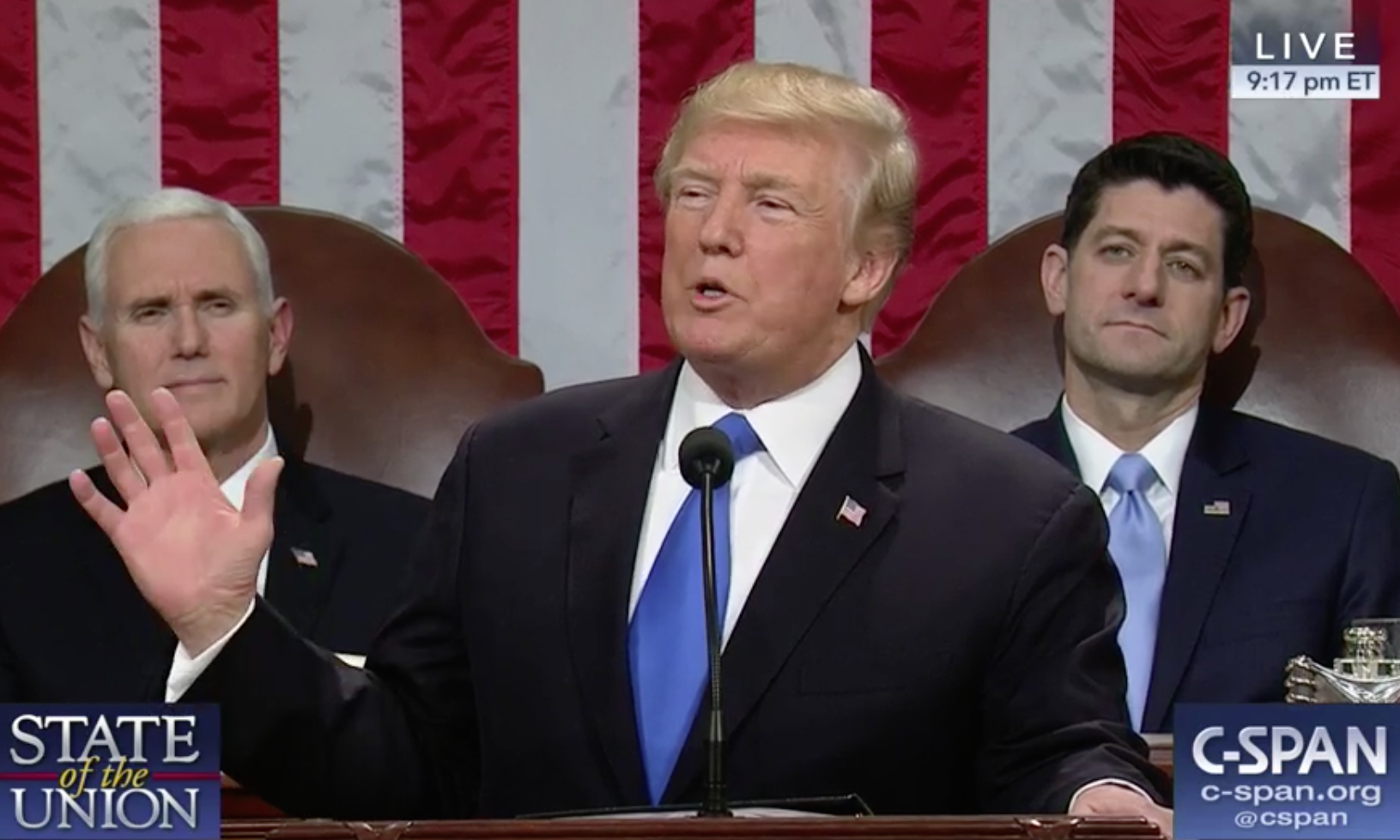 President Donald Trump delivers his State of the Union address.

Washington – In his first State of the Union address President Donald Trump sought to send Americans an upbeat message – and Connecticut lawmakers showed up to make their points, too.

In his address to the nation and a joint session of Congress, Trump made a bid for bipartisanship after a tumultuous and often combative first year in office.

“Tonight I am extending an open hand to work with members of both parties, Democrats and Republicans, to protect our citizens, of every background, color and creed,” Trump said.

But Democrats sat glumly through most of Trump’s speech and groaned at times at what the president said, especially when Trump mentioned a recently released immigration policy “framework.”

Last week, the president proposed a deal that would allow “dreamers” — young immigrants brought to the United States illegally as children — to be given a path to citizenship in exchange for a border wall, an increase in border-security funding and cuts to legal immigration, a deal rejected by Democrats who invited dozens of dreamers to the speech in protest. 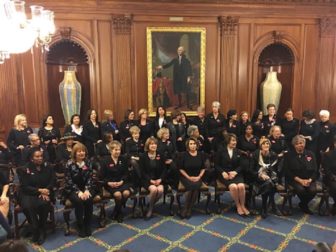 U.S. Rep. Rosa DeLauro, second from right in front row, sits among lawmakers wearing black in sympathy with the Time’s Up movement before Trump’s speech.

Connecticut’s Democratic lawmakers had more muted messages – none invited a dreamer to the speech — but they still strove to be heard.

Rep. Rosa DeLauro, D-3rd District, renowned for her colorful outfits, was among dozens of female lawmakers who wore black to show solidarity with the Time’s Up campaign against sexual harassment and express support for women who have been sexually harassed or abused.

Like many lawmakers, DeLauro sent a message with her choice of guest — Dr. Suzanne Lagarde, CEO of the Fair Haven Community Health Care – in an effort to highlight the appropriations battles in Congress over community health care funding.

An important grant program for these centers ended on Sept. 30 and many centers may close or cut hours or services if Congress does not act soon to fund the program.

Rep. Elizabeth Esty, D-5th District, did not wear basic black. She dressed in red, white, and blue, and sat with a group of Democratic and Republican lawmakers who were similarly attired to show bipartisanship and a willingness to work together on certain issues, like infrastructure.

Esty’s guest, who watched the president’s speech with other guests from the visitors’ gallery was John Harrity, president of the Connecticut State Council of Machinists.

Esty said she backed the campaign against sexual harassment, “but it is not my principal focus.”

“My message really is bipartisan,” focused on jobs and the economy, Esty said.

Rep. John Larson, D-1st District, said the president “touched a lot of emotional touchstones and struck the right tenor” in his speech, 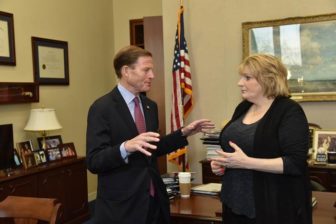 Sen. Richard Blumenthal with his guest for the state of the union address, Theresa Leonard, a survivor of child sex-trafficking.

“But what remains is…getting people together to actually vote on specific legislation,” Larson said. “ I won’t say that it was a Jekyll and Hyde performance, but this is a different president than I have seen.”

“The president in that chamber was more a divider than a uniter,” Blumenthal said. He also said most of the president’s speech was “red meat for his base.”

Blumenthal also said “the most glaring omission” in Trump’s speech was “there was no mention of Russian interference” in the 2016 elections.

Trump talked about his long-awaited infrastructure proposal, but it received a cool response from Democrats in the House chamber.

The White House proposes to spend $200 billion over 10 years, which is supposed to leverage additional money from states, local government and private investors so that it will total S1.5 trillion.

Trump also said he will eliminate “red tape” that slows infrastructure projects. But that involves rolling back some environmental laws that could open wetlands and other environmentally sensitive areas to development, something Democrats would oppose.

“Together, we can reclaim our building heritage,” Trump said. “We will build gleaming new roads, bridges, highways, railways and waterways across our land.  And we will do it with American heart, American hands, and American grit.”

DeLauro tweeted, “to rebuild our nation’s infrastructure, we need robust public investment and a national infrastructure bank, not privatization.”

The president also touted a recent overhaul of the federal tax code, which will provide tax cuts for many but add $1.5 trillion to the deficit over the next decade, and said the American economy is strong.

“African-American unemployment stands at the lowest rate ever recorded, and Hispanic American unemployment has also reached the lowest levels in history,” Trump said. “The stock market has smashed one record after another, gaining $8 trillion in value. That is great news for Americans’ 401k, retirement, pension, and college savings accounts.”

Sen. Chris Murphy took to Twitter immediately after the speech. 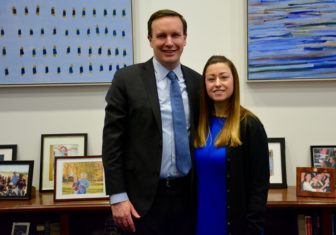 “Ugh. If you were hoping for a unifying speech, you got the opposite. Pep rally w GOP on tax reform, ACA repeal. Over the top demonization of immigrants. No mention of Russia,” Murphy tweeted.

“He had a lot of compelling guests, but in between the introduction of those guests he picked every political scab in existence,” Murphy said.

To some of the loudest applause that night, mostly from Republican members, Trump said, “We repealed the core of disastrous Obamacare — the individual mandate is now gone. ”

Murphy invited Caroline Johnson of New Britain to witness the speech. Johnson is an advocate for early cancer screening and research funding whose husband, Scott Johnson, a New Britain firefighter and a chief petty officer in the U.S. Coast Guard, died of colorectal cancer last year.

With a surge in colon cancer among young men, Johnson said she would take the opportunities the State of the Union offers to lobby lawmakers to lower the age at which most people have their first colonoscopy, which is now 50.

“Bullies may land a punch.  They might leave a mark,” Kennedy said. “But they have never, not once, in the history of our United States, managed to match the strength and spirit of a people united in defense of their future.” 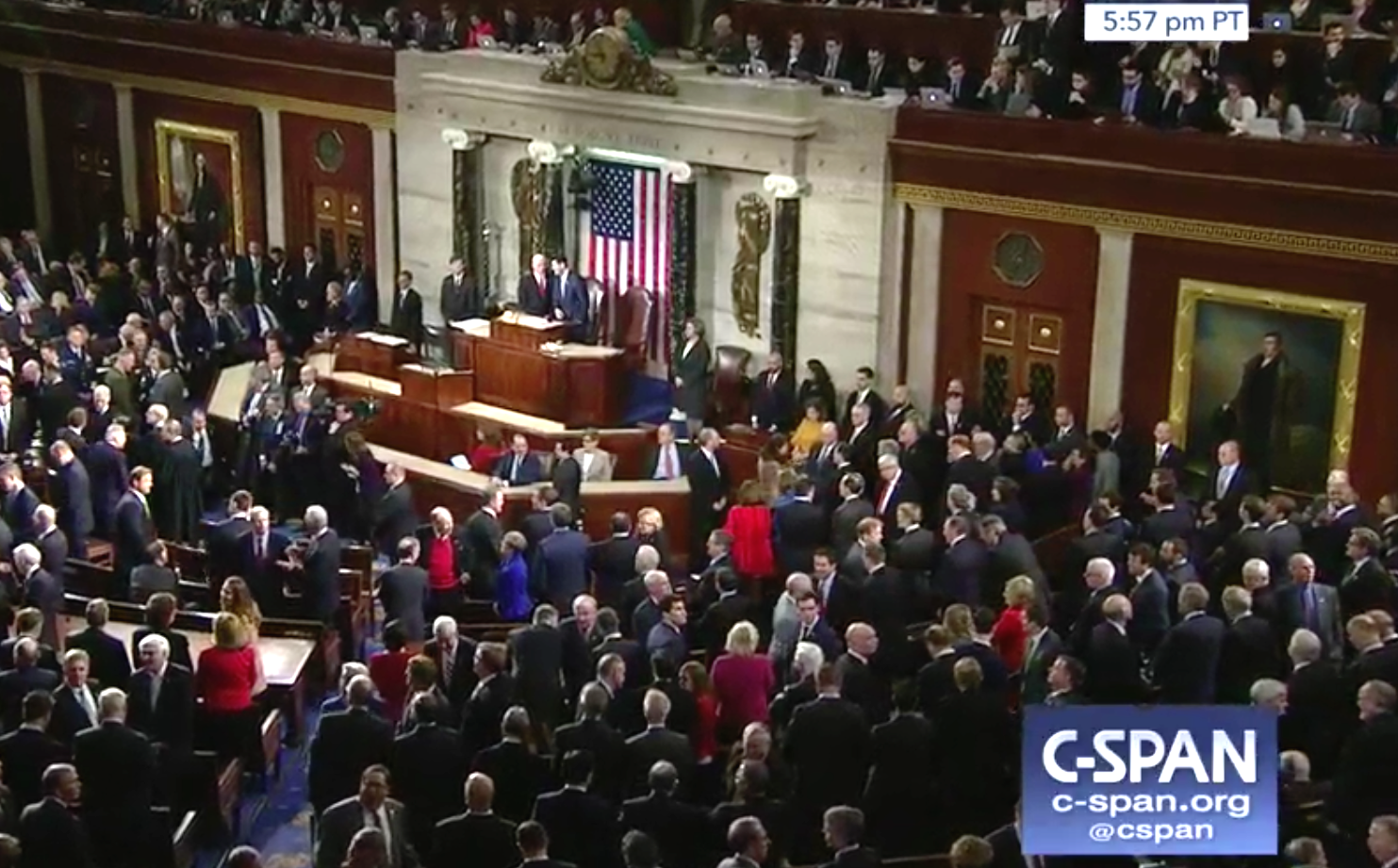 Members of Congress and other guests gather in the House chamber before the address.