Budget deal has plenty for Connecticut 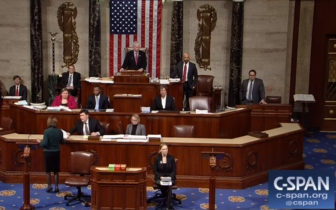 The U.S. House of Representatives as it prepares to vote on the budget bill.

The budget deal increases both military and domestic spending.

It will raise defense spending to $700 billion for 2018 and $716 billion for 2019, increasing the number of F-35s the Pentagon will buy this year to about 90 and boosting money for the new Columbia ballistic missile submarine and the Virginia-class attack sub, which are both built by Electric Boat. The budget deal also is expected to increase the number of Sikorsky-made helicopters the military will buy this year and next.

Every member of Connecticut’s congressional delegation, all Democrats, voted for the package, saying it would boost Connecticut’s economy.

“Connecticut stands to benefit from significant, necessary increases to both military and non-military spending critical to our nation,” Sen. Richard Blumenthal said.

Under the bill, existing spending caps would be raised by nearly $300 billion through 2019. Those caps were the result of an agreement between former President Obama and GOP congressional leaders in 2011.

The busting of the caps was a problem for some GOP conservatives, including Sen. Rand Paul, R-Ky. He objected to the deal’s increase in federal spending and held off a vote on the far-reaching budget deal that aimed to stave off a government shutdown at midnight. Because Congress could not act in time, the government was shut down for several hours.

Meanwhile, liberal Democrats fumed about the lack of protections for young immigrants known as “dreamers,” who are at risk for deportation.

But in the end, the agreement was approved by healthy margins in both the House and Senate. The Senate vote was 71-28 and the House vote was 240-186.  President Donald Trump signed it into law Friday morning.

“I voted in favor of today’s two-year budget agreement because it funds many initiatives I wholeheartedly support and have championed throughout my entire life,” said U.S. Rep. Rosa DeLauro, D-3rd District. “Connecticut’s seniors, children, families, and veterans will benefit from the funding increases contained in this agreement.”

U.S. Rep. Jim Himes, D-4th District, said “it was not an easy vote,” but that Americans “desperately need their government’s support and would have been harmed by another shutdown.”

“While I am conscious of the perils of increased deficits to our economy’s long-term health, I cannot allow our nation’s most vulnerable to suffer while we withhold vital funds today,” Himes said.

“This bill will clarify in the U.S. Flag Code that governors can lower the American flag to half-mast in the event of the death of a first responder,” he said.

Several Democrats who supported the budget legislation called for quick congressional action on the “dreamers.” They are losing their protections from deportation because Trump has ended the Deferred Action for Childhood Arrivals program. About 8,000 immigrant youth in Connecticut who were eligible for DACA are in danger of deportation.

“President Trump, Speaker Ryan, and Senate Majority leader McConnell have all repeatedly and publicly stated their intent to help Dreamers — and the American people expect them to follow through on their commitments,” Courtney said. “Now that we have set aside the overarching budget crisis, we will hold their feet to the fire and ensure that they keep their pledge to bring a Dreamers fix to the floor for an up or down vote. History and the entire nation will be watching.”

The far-reaching budget bill, the result of an agreement between Senate Majority Leader Mitch McConnell, R-Ky., and Senate Minority Leader Charles Schumer, D-N.Y., will impact the state in several ways.

Connecticut dairy farmers will be helped by the bill’s changes to the Margin Protection Program — a program that protects dairy farmers from sharp drops in the price of milk. The bill requires the Secretary of Agriculture to reopen the signup period for the program and offer farmers an opportunity to buy into it at more affordable rates.

The bill also provides billions in new aid to the victims of last year’s hurricanes, including millions of dollars to help schools educate students displaced by the storms. As of Feb. 2, Connecticut school districts had registered 1,846 new students from Puerto Rico, victims of Hurricane Maria.

Although it will fully fund the Pentagon for two years, extend authorization for the Children’s Health Insurance Program until 2028 and replenish the federal grant program that helps the state’s community health centers, the budget agreement will fund most of the rest of the federal government only until March 23. That is expected to give congressional appropriators enough time to negotiate the fine details of funding agencies for the remainder of 2018.

The tax bill also contains a number of tax “extenders,” the name given to a number of tax breaks that were meant to be temporary but have been renewed by Congress for years. The extenders benefit racetracks, movie and television producers, craft breweries, rum makers, and biofuel producers, to name a few.

Also in the extenders package are five years of tax credits for U.S. companies investing in fuel cells — which is likely to be a boon to Connecticut’s fuel cell industry — small wind, geothermal heat pumps, combined heat and power, and microturbines.

A new measure was added to the extenders package that would help Westport’s Newman’s Own Foundation, which gives 100 percent of the profits made from the Newman’s Own food business to charity, but would have been hit with a 200 percent tax this year unless it divested or got the exception.

“Listen, this deal isn’t perfect, but people in Connecticut are sick and tired of Congress just pushing all these critical issues down the road, and this deal gets us much-needed certainty about the future of federal spending and taxes,” said Sen. Chris Murphy. “The tax provisions in this bill are also really good news for Connecticut. We protected Newman’s Own Foundation from a huge, unintended tax increase, and we won inclusion of big tax breaks for Connecticut’s fuel cell industry.”