Connecticut’s U.S. senators and two of its congressmen asked Monday that the inspector general of the Department of the Interior investigate the department’s role in blocking the Mashantucket Pequot and Mohegan tribes from jointly developing a commercial casino in East Windsor to compete with an MGM gaming resort under construction in Springfield.

The state’s authorization of the East Windsor casino is contingent on Interior’s accepting amendments to the tribes’ gaming agreements with Connecticut affirming that the commercial project would not violate an existing deal under which the tribes’ pay 25 percent of the slots revenue from their tribal casinos, Foxwoods and Mohegan Sun.

But the Interior Department, after lobbying by MGM Resorts International, declined to act on the amendments, which the Connecticut senators and congressmen say in a letter is a violation of the department’s “longstanding legal trust responsibilities regarding Native American Tribes.” MGM should have no standing at Interior, they wrote.

MGM spends $3.8M lobbying in Hartford, but wins in Washington

“The Department of the Interior’s mission is to foster the government-to-government relationship between the federal government and the federally recognized American Indian and Alaska Native Tribes — irrespective of economic considerations presented by parties with no immediate connection to Federal Government’s trust responsibilities,” they wrote.

Zinke and James E. Cason, the Interior Department’s point man on off-reservation casinos, had a scheduled meeting at the White House with Rick Dearborn, the deputy chief of staff, on Sept. 14, the day before Interior informed the tribes and Connecticut it would take no action on the gaming amendments.

“I have nothing to add to your story,” said Heather Swift, a spokeswoman for Zinke.

In an interview the same day, Murphy told CT Mirror he took that  as a confirmation of the White House’s involvement. “It’s pretty remarkable they are not denying it,” Murphy said.

The tribes applaud the action Monday.

“We want to thank Senators Blumenthal and Murphy and Representatives Courtney and Larson for taking this step today,” said Andrew Doba, a spokesman for the tribes’ joint venture, MMCT. “Their letter raises serious questions about how the Department of Interior handled our request and their subsequent refusal to follow the law.”

Alex Hinson, the deputy press secretary for the Interior Department, said he could not comment on the request for an investigation by the inspector general because it relates to a question under litigation.

Uri Clinton, a senior vice president and legal counsel for MGM, said the issue will be resolved in court, not by the inspector general.

“Both MGM and the tribes have previously been in communication with the Department of Interior, as the public record clearly indicates, offering relevant facts or legal analysis for consideration,” Clinton said. “There is litigation already underway which will ultimately determine matters in the public interest that the proposed federal review seeks to address. A federal court will resolve these issues in due course.”

The request Monday for inspector general’s investigation comes nearly three months after the tribes and Connecticut sued Zinke in an effort to force him to take action on the gaming amendments, arguing that Zinke had missed a 45-day deadline for acting on amendments to gaming compacts negotiated by states and tribes.

The Trump administration responded to the lawsuit last week, seeking a dismissal on the grounds that the lawsuit was legally flawed. The Interior Department said that the 45-day deadline applies only to gaming compacts produced by state and tribal negotiations. The Pequots’ gaming agreement with Connecticut, the department noted, was imposed by the Interior Department after the state refused to negotiate a compact. 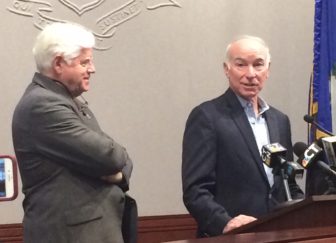 Even if Zinke could be forced to accept the amendments, there is no quick path for the tribes to begin construction. MGM is prepared to sue in U.S. District Court, alleging that Connecticut violated the Equal Protection and Commerce clauses of the U.S. Constitution by passing a law last year that exclusively grants the tribes the right to develop a commercial casino.

The legislature could amend the law to drop the requirement that Interior accept the gaming amendments before construction, but that would be politically difficult. The requirement was an important reassurance to many legislators that a vote for the East Windsor casino would not invalidate the existing revenue sharing deal.

MGM has since bolstered its lobbying position in Hartford by opening a new campaign to convince legislators they could make more money for the state by opening Fairfield County to competition for a new commercial casino license. MGM says it would build a casino in Bridgeport, if granted a license.