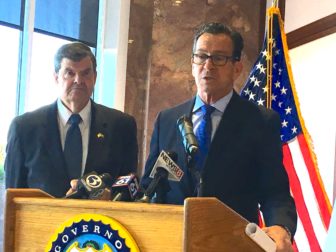 Washington – Connecticut’s bid to do an end run around the limits on the deductibility of state and local taxes under the new federal tax law is likely to engender a new clash with the Trump administration, but it’s also based on precedent and law.

The new proposal, submitted as legislation to the General Assembly last week, uses as precedent similar moves the Internal Revenue Service allowed in other states to increase government funding for education, shelters for battered women and other local government initiatives.

“There are already programs like this, mostly in ‘red’ states,” said Connecticut Department of Revenue Services Commissioner Kevin Sullivan.

Gov. Dannel P. Malloy proposed allowing municipalities to set up certain “charitable” organizations that would pay for some of the obligations that local government has – say running schools or picking up trash.

Connecticut taxpayers would then “donate” to this fund and be able to take a credit on their municipal taxes. The donation also would become a charitable deduction on their federal tax forms. While the federal charitable deduction has been left intact and is largely unlimited, the new tax overhaul capped the deductibility of state and local taxes at a total of $10,000, which hurt states like Connecticut that have a high cost of living and higher state and local taxes.

California is credited with leading the effort to find a way to help these mostly “blue” states to counter the new cap on state and local income tax deductibility.

The California state Senate has approved a bill that would allow 85 percent of contributions to a special state fund to be credited against the donor’s state tax liability and taken 100 percent as a charitable deduction on a federal tax form. That bill will soon be considered by California’s House.

California, Connecticut and other states seeking to blunt the impact of the new federal tax law looked to a study they hope will give them legal ammunition against the Trump administration pushback they anticipate.

“We did the legal research,” Sullivan said.

The study, written by eight law professors who specialize in taxes, cites a 2011 Internal Revenue Service memo that said state and local governments may turn charitable donations into tax credits under certain conditions.

The study also cited court cases upholding the practice by some jurisdictions.

Before the new federal tax plan was signed into law, there were at least 18 states that turned charitable contributions into tax credits, not to increase federal deductions but to steer funds to key programs.

Arizona, South Carolina, Alabama and Georgia, for instance, are among the states that allow tax credits for donations to school voucher programs.

Missouri gives tax credits for donations to local food pantries and shelters for victims of domestic violence, and many states give credits for land donated for conservation easements.

Kirk Stark, a professor at the UCLA School of Law and an author of the study, said, “It is very common for state and local governments to incentivize donations to certain entities.”

“Some of those are government entities, some of them are non-profit entities,” Stark said.

The IRS allows those transfers.

But Stark said the IRS probably will take a different position on the issue than it did in 2011 if Connecticut and other states try to work around the new cap on the deductibility of state and local income taxes, stripping the U.S. Treasury of funds.

Sullivan also is aware there could be trouble for Connecticut towns that want to implement the plan. “I assume the Trump administration will put the squeeze on the IRS and on the states,” he said.

Kirk advised those seeking a workaround to ask the IRS for an advance ruling on their plans.

Ultimately, Congress could outlaw the practice, but that would reopen the bitter debate on the tax overhaul, which did not get any Democratic support.

Meanwhile more states, including Maryland, New Jersey and the District of Columbia, are joining the tax rebellion.

Sullivan said Connecticut’s proposal would give towns the option of joining the program or not, to set up whatever funds they think are necessary and to make the credit at whatever percentage of the donation they choose.

Taxpayers making charitable contributions would do so before they received their tax bills, so the donations could not be considered a tax payment, Sullivan said.

He also said Connecticut would have a “window of time” before the new program became effective “to determine whether we will have a fight with the IRS.” He said the proposal has been embraced by Democrats in the state assembly “and Republicans have not criticized it.”

“We don’t know exactly how it’s going to work,” he added.