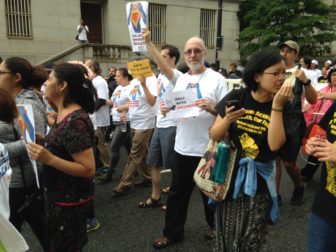 Patrick Carolan of Stratford, executive director of Franciscan Action Network, holds a “Pray with Dreamers” sign at a parade and rally to support the dreamers last summer in Washington, D.C.

Washington – Congress proved it is as stalemated on immigration as it is on gun control Thursday, as the Senate failed to advance any of three bills that would protect young immigrants known as “dreamers” from deportation.

The Senate’s inability to agree on an immigration bill leaves about 700,000 undocumented youth – about 10,000 of them in Connecticut – who came to this country as infants and small children in danger of deportation, especially after March 5, when the permits that gave them provisional legal status and work permits begin to expire.

“I am heartbroken that the dreamers remain at severe risk of mass, draconian deportation after the Senate’s abject failure to act responsibly and protect them,” Sen. Richard Blumenthal said.

After four days of debate in the Senate, each of the three proposals — one that contained President Donald Trump’s “framework,” for immigration, another preferred by dreamers because it includes a five-year pathway to citizenship, and a bipartisan compromise — each fell short of the 60 votes needed to advance.

Another bill, which would punish “sanctuary” jurisdictions and clarify the law to make it clear that state and local law enforcement may cooperate with federal officials and hold undocumented prisoners past their release date so federal immigration agents could take them into custody, also failed.

Connecticut rejects some federal requests to detain certain prisoners past their release date.

Connecticut’s Democratic senators, Richard Blumenthal and Chris Murphy, voted for two of the bills, the one preferred by dreamers and the compromise bill that would give President Donald Trump $25 billion to build his proposed wall between the United States and Mexico.

But on Thursday the White House threatened a veto of the compromise plan and Trump called it “a total catastrophe.” It failed on a 54-45 vote.

“I hated the compromise,” said Sen. Chris Murphy, “But it was the best chance of saving these kids’ lives.”

Murphy blamed his Republican colleagues for the failure to prevent a looming immigration crisis.

He also said “the minute Donald Trump told Republicans he was opposed to (the compromise), it was dead.”

While providing $25 billion for southern border security construction projects, the compromise would not release the money immediately, as Trump wants. The legislation also would have curbed family-based immigration, but not as much as Trump is seeking, and would not comply with the president’ wish to end a diversity visa lottery program. Like Trump’s proposal, the compromise would have provided legal status to 1.8 million young immigrants. 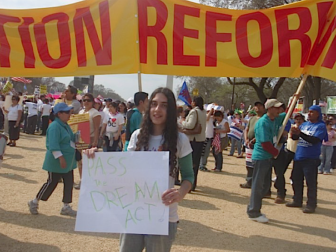 Trump ended an Obama-era program known as Deferred Action for Childhood Arrivals, or DACA, in September, but allowed immigrant youth whose temporary permits were about to expire in the next six months to renew them.

But after March 5, those permits will begin to expire in large numbers. Murphy said the president could reverse course and re-implement DACA since there’s a stalemate in Congress.

“This is a Donald Trump disaster, and he could decide tonight to save these kids’ lives,” he said.

Blumenthal said, “I am furious that President Trump threw a ticking time bomb to Congress, and then slammed the door on compromise at every turn.”

Carolina Bortolleto, co-founder of Connecticut Students for a Dream, said senators had been negotiating a solution for the dreamers for weeks and that the White House has “shown its hand” by rejecting bipartisan deals on immigration.

“They don’t want a solution for immigrant youth,” Bortolleto said. “They want to create an atmosphere of fear.”

She said dreamers, an energetic and nearly constant lobbying force on Capitol Hill, will continue to keep fighting for legislation that would protect immigrant youth.