Mark Barden holds up a picture of his 6-year-old son Daniel, a victim of the Sandy Hook shooting, at a press conference on gun control Friday. From left are Sen. Richard Blumenthal, and U.S. Reps. Elizabeth Esty and Rosa DeLauro.

Washington – Despite President Donald Trump’s willingness to support modest tweaks to the nation’s gun laws, Congress may not approve much change as lawmakers remain entrenched in a mostly partisan split over the issue, despite the national debate touched off by the Parkland, Fla., massacre.

Still, lawmakers who have pushed since the Newtown shooting for stricter gun laws say they are hopeful. They see a new environment, thanks largely to the protests led by the students-turned-activists after the Florida shooting last week.

“Something different, though, is happening right now,” said Sen. Chris Murphy, D-Conn., at a press conference in Hartford Friday. “Because of the courage of victims, of victim’s families and the students in Parkland, the country is waking up.”

But the National Rifle Association has gone on the offensive, pushing back against all who are calling for stricter gun laws, including the teenage survivors of the Parkland attack. 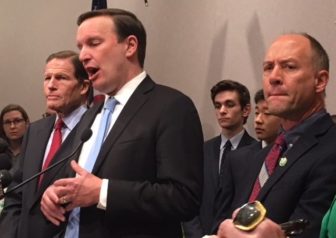 NRA chief executive Wayne LaPierre, speaking at the Conservative Political Action Conference on Thursday, said Democratic lawmakers who support gun restrictions are exploiting the Parkland tragedy for political gain. He called Murphy and other Democrats, including Sens. Kamala Harris, D-Calif., and Elizabeth Warren, D-Mass., and New York Gov. Andrew Cuomo “a tidal wave of new European socialists” bent on an agenda that would hurt the nation.

“The elites care not one whit about America’s school system and schoolchildren,” LaPierre said.

LaPierre ended his speech by repeating comments he made about five years ago after the mass shooting in Newtown: “To stop a bad guy with a gun, it takes a good guy with a gun.”

Adam Lanza’s attack on Sandy Hook elementary in December of 2014, which left 26 dead, 20 of them first-graders, reawakened the long-dormant issue of gun control in Congress. But that horrific shooting, and other mass murders that followed, did not result in any change because of the unique political culture in Congress.

Most Republicans don’t see gains in supporting gun control because that would earn them a poor rating from the National Rifle Association, upset segments of their base, and set them up as targets for well-funded attacks from the gun lobby.

And this year, an election year, many GOP lawmakers fear primary challenges from the right.

Still, the Parkland shooting has shifted the views of a few Republicans, including Sen. Marco Rubio, R-Fla., who indicated at a CNN town hall this week he may split with the NRA on a couple of issues, including raising the age limit for purchasing assault weapons from 18 to 21.

“I absolutely believe that in this country if you are 18 years of age, you should not be able to buy a rifle, and I will support a law that takes that right away,” Rubio said. 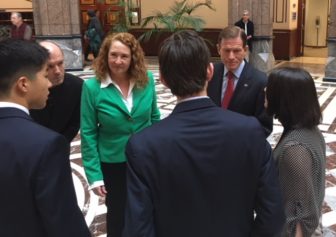 Trump also said he would support an increase in the age limit and back “stronger background checks” of potential gun buyers.

But it’s not clear what the president is talking about — whether he backs a modest, NRA-approved measure sponsored by Murphy and John Cornyn, R-Texas, called the “Fix NICS’ bill, that is aimed at inducing states to report more records to the National Instant Criminal Background Check system, or something more comprehensive.

Giving an inch on gun control

At the Hartford press conference, Murphy said he and Sen. Richard Blumenthal are also supportive of legislation that would raise the age of those allowed to buy long guns and assault rifles.

“There is a renewed push to ban assault weapons across the country. We still support universal background checks legislation that would require that everybody buying a gun in a commercial sale prove that they’re not a criminal,” he said.

But even a modest proposal like the “Fix NICS” bill is running into trouble in Congress.

It is already opposed by three Senate Republicans: Mike Lee of Utah, John Kennedy of Louisiana and Rand Paul of Kentucky. And the Gun Owners Association, which is more hard-line than the NRA, also opposes it.

One senator can block quick passage of legislation. And if Senate Republicans do manage to pass the Fix NICS bill, it would face serious trouble in the House. GOP leaders in that chamber have combined the background-checks measure with concealed-carry legislation that has no chance of passing the Senate and promised conservatives those two bills won’t be separated.

On Friday, House Whip Steve Scalise, R-La., who was a victim of a shooting last year, said, “There’s no magic bill that is going to stop the next thing from happening when so many laws are already on the books that weren’t being enforced.”

But on Friday, a group of moderate House Republicans wrote House Speaker Paul Ryan, R-Wisc., asking for a vote on a stand-alone Fix NICS bill.

“In Parkland, Florida, news reports have said that the FBI was made aware of the shooter’s online threats and the ongoing investigation will determine who knew of that information and when,” the lawmakers wrote. “Under the Fix NICS Act, agencies like the FBI, DOD or local law enforcement will face significant penalties for failure to report accurate information to NICS.”

Congress has been out of session since the Parkland shooting, so where lawmakers stand on the gun issue can’t be fully gauged until they come back to work next week.

Many Republicans will look to both the NRA and the president for guidance. So far, Trump has not given many details on some of the proposals he has raised since the shooting. 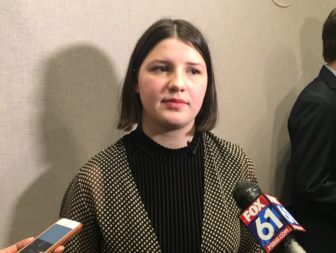 The president has directed the Justice Department to design a ban on “bump stocks,” an accessory used to transform a semi-automatic weapon into a fully automatic one, which was used by the mass shooter in Las Vegas last year to kill 58 and injure hundreds. But Trump has not endorsed legislation that would ban bump stocks and other similar devices.

The Bureau of Alcohol, Tobacco, Firearms and Explosives has told Congress federal agencies don’t have the authority to ban bump stocks, and the NRA opposes legislation that would do so.

The president — and the NRA — have been clear in their support of arming school teachers and other school personnel.

“It’s time to make our schools a much harder target for attackers,” Trump said at the CPAC convention Friday.

That idea has been roundly rejected by the nation’s teachers unions, and many law enforcement officers.

“Arming teachers is half-cocked, harebrained, toxic lunacy,” Blumenthal said. “Anyone who talks to law enforcement officers, let alone teachers, knows the chaos and confusion that is involved in a mass shooting; nobody in the classroom who teaches for a living can really be trained to deal with that kind of situation … let’s arm teachers with knowledge not guns.”

At the CPAC convention, Trump also echoed the NRA argument that giving an inch on gun control would lead to national gun collection.

Still, the student activism sparked by the massacre at the Marjory Stoneman Douglas High School in Parkland has gun control advocates hoping for momentum.

Lane Murdock, a 15-year-old Ridgefield High School sophomore who created the national school walkout set for April 20, the 19th anniversary of the Columbine school massacre in Colorado, said at Friday’s Hartford press conference she was moved to act because school shootings “should not be a normalcy.”

Mark Barden, who lost his 6-year-old son Daniel in the Newtown shooting, said he is “sick of having to figure this out,” five years after Daniel’s death.

“And you know who is doing something, are these amazing high school students,” Bardin said. “Oh my God, what a force to be reckoned with. That is a no bullshit constituency that is speaking up, and they are protecting their own future. They are not going to be intimidated by corporate greed, they’re not going to be bullied by money and power.”