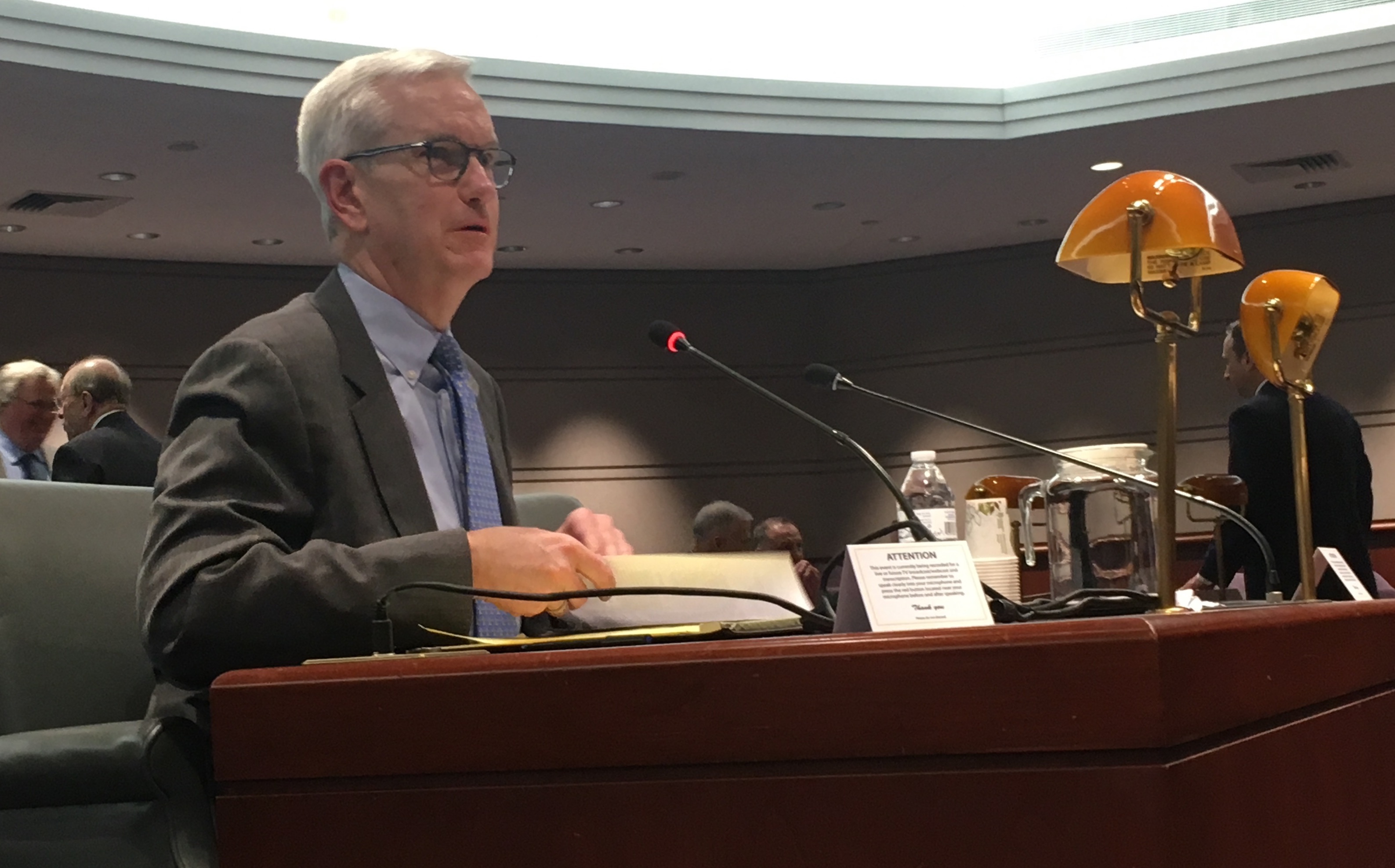 Justice Andrew McDonald testifies before the Judiciary Committee on his nomination to become chief justice of the Connecticut Supreme Court.

After a 13-hour confirmation hearing that began on Monday morning and continued until the wee hours Tuesday, a key legislative committee ended in a deadlocked vote on Connecticut Supreme Court chief justice nominee Andrew McDonald. The 20-20 vote with one abstention will still send McDonald’s nomination to the full legislature, but with an unfavorable recommendation.

The Judiciary Committee vote was almost entirely along party lines, with Rep. Minnie Gonzalez, D-Hartford, crossing over and joining Republicans in voting no and Rep. Tom O’Dea, R-New Canaan, abstaining.

Nearly two hours before the vote, Gov. Dannel P. Malloy released a statement reaffirming his support for McDonald, now an associate justice on the court.

“After today’s hearing, there should be no doubt that Andrew McDonald has the qualifications, experience, and temperament to lead the state’s highest court … it is clear that Justice McDonald is eminently qualified and should be confirmed, as legal experts thoughtout the state have agreed,” Malloy said.

The vote came after legislators questioned McDonald for hours, pressing him on his Supreme Court vote to abolish Connecticut’s death penalty, his record as a Democratic legislator, and his friendship with Malloy.

McDonald, who is 51 and would be the first openly gay chief justice in the nation, repeatedly denied he was a judicial “activist” and parried persistent questions about the capital punishment case.

During questioning by Democratic Rep. William Tong of Stamford, McDonald said accusations of judicial activism by those on the left or right are “in the eye of the person who dislikes an opinion.”

Opponents have criticized McDonald’s vote with the majority to strike down the last remnants of the death penalty in the Supreme Court’s controversial 4-3 decision in the case commonly called “Santiago.”

The case reviewed a 2012 law in which the legislature eliminated capital punishment for future crimes, while leaving intact the sentences of 11 men already on death row. The Santiago decision set those sentences aside, concluding it would violate the eighth amendment prohibition against cruel and unusual punishment.

When Rep. Arthur O’Neill, R-Southbury, asked McDonald whether he should have recused himself from the death-penalty vote because he discussed the death penalty as a legislator, McDonald stressed there is no precedent for disqualifying a judge because of prior involvement as a lawmaker.

McDonald served as co-chair of the legislature’s Judiciary Committee during his eight years in the Senate, and later resigned from the General Assembly to become the top legal advisor to Malloy during his first two years as governor. Malloy named him to the Supreme Court in 2013 and is now seeking to elevate him to chief justice.

“I frankly think that we are only having this discussion because of the heightened profile of this particular case, but the profile can’t drive the decision,” McDonald said. “It’s the principle that has to drive the decision.”

Lawmakers also focused on McDonald’s support in the legislature for an unsuccessful and controversial bill in 2009, which would have given lay members of the Roman Catholic Church more control of parish finances, an action criticized as an intrusion into church affairs.

O’Neill also asked McDonald to confirm whether Malloy officiated at his wedding, and later said, “It strikes me as an extremely unusual thing for the person who becomes the governor, then appoints someone to become a member of the Supreme Court, and then appoints that person to become the chief justice, also officiated at their wedding.”

O’Neill pressed McDonald on whether he could separate his judicial rulings from his friendship with Malloy and advocacy for policies both of them supported.

Sen. Ed Gomes, D-Bridgeport, did not ask McDonald any questions and instead offered him praise.

“As far as I’m concerned, I admire your work, I admire you, I think you’re a person of integrity, and if I had to vote right now I’d cast my vote for you,” he said.

A group of 10 Republican legislators announced their opposition to McDonald’s nomination just before he sat down before the legislature’s Judiciary Committee. The Conservative Caucus in a statement noted that past chief justices’ had previously served on the Superior Court and the Appellate Court and that other current Supreme Court justices have more experience than McDonald.

“Our members also have concerns about Justice McDonald’s role in the judicial repeal of Connecticut’s death penalty statute and other potential judicial overreach,” the group said. 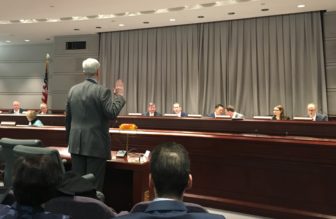 Justice Andrew McDonald is sworn in before testifying on his nomination to become chief justice of the Connecticut Supreme Court.

McDonald would succeed Chase T. Rogers, who stepped down earlier this month after 10 years as chief justice. If confirmed, McDonald’s promotion would open a vacant associate justice position, giving Malloy one last appointment to the court.

During his opening statement before the committee, McDonald said he was committed to the culture of openness, accountability and transparency Rogers promoted. He said the branch needs to further enhance its technology and improve its infrastructure.