A proposal that could empower state’s metros 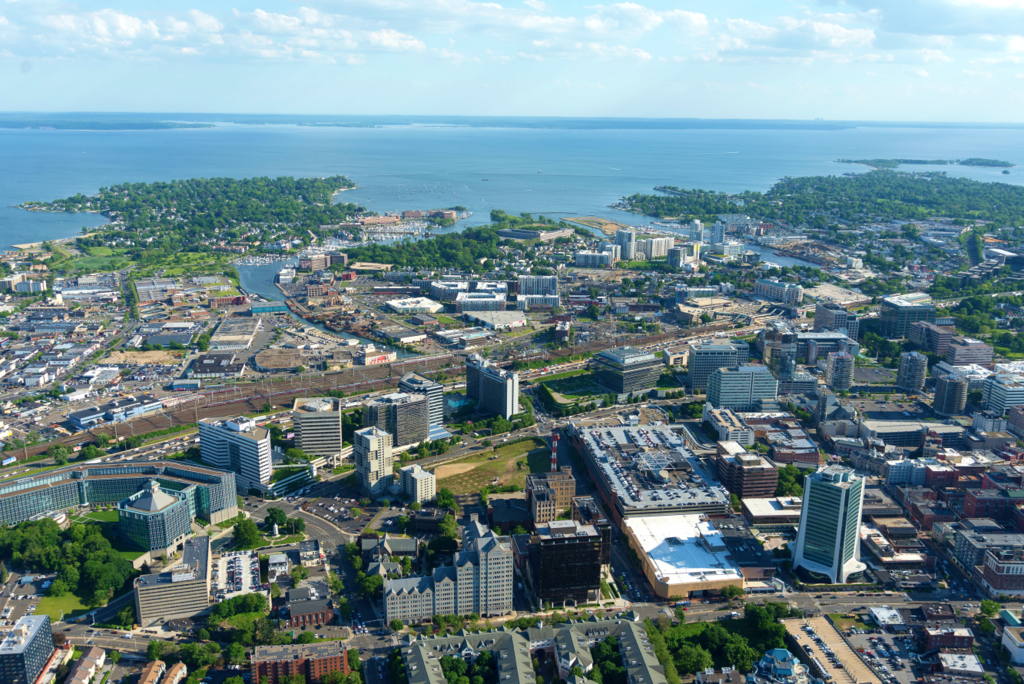 Downtown and the South End of Stamford with Long Island Sound in the background. (John9474 via Creative Commons)

Last year Hartford Mayor Luke Bronin visited several suburban towns to explain the structural problems — too small a property tax base to pay for demanding services without a prohibitive tax rate — that were forcing Hartford to think about bankruptcy.

Though the frank discussions may have gained Bronin legislative support, no area town offered to partner with Hartford to ease its burden. At least one suburban mayor blamed Hartford for its problems, and others fretted about paying Hartford’s share of the regional water and sewer bill if the capital city filed for bankruptcy.

Though bankruptcy was avoided, the situation demonstrated that the flame of regional cooperation doesn’t burn brightly in town-oriented Connecticut. Some towns, often suburbs, don’t trust other towns, often cities, and thus are reluctant to work together.

Thursday the Commission on Fiscal Stability and Economic Growth recommended that the General Assembly offer an incentive to help bridge that divide. The commission proposed giving the state’s nine regional councils of governments, or COGs, the option “to levy an additional sales tax of up to 0.5 percent … to be used solely for regional economic development and shared service arrangements.”

The commission also recommended that COGs, or consortiums of COGs, as well as municipalities, be “authorized to impose supplemental time-limited sales or property taxes by special referenda to fund discrete capital projects,” as is allowed in Wyoming, California and some other states.

By granting taxing power to the COGs, the commission avoids the more radical option of consolidating small towns into larger ones, and instead urges what might be called an overlay approach, empowering a regional organization that already exists to do more of what it has been doing. Many of the state’s nine COGs have been doing yeoman work to increase regional sharing of services, but have been hamstrung by recent budget cuts. New money would help.

The proposal comes at a difficult budgetary time — next year’s legislature will face a biennial deficit of more than $4 billion — but what might help the regional taxing proposals is that they are optional — regions can choose to levy the taxes or not. Many regions across the country have taxed themselves for transit or economic development projects.

Connecticut is a state of 169 small towns and medium-sized cities, and, as the Fiscal Commission observed, is likely to stay that way. People moved to towns for good schools, good services, tolerable taxes, safe streets, the character of the place. They don’t want to see any of these assets diminished.

But there is a downside to the ancient 169-town framework.

Fragmented local government isn’t unique to Connecticut, it occurs elsewhere, most noticeably in the Northeast. Brookings did a study of Pennsylvania, a state as fragmented as Connecticut, in 2006. Its findings include:

So the trick is to find balance; to find projects that can improve a region without doing harm. What might those be? For one, there is more hay to be made by sharing services.

There is a good amount of regional service sharing going on in the state, and it has saved money.

For example, John Filchak, executive director of the Northeastern Connecticut Council of Governments, said the 12 towns participate in his regional property revaluation program save an average of 50 percent on what they would pay individually; the 18 towns in his animal control program save 10 to 60 percent.

The Capitol Region Council of Governments’ purchasing compact has saved millions of dollars for nearly 120 towns.

More opportunities exist. A 2013 study by the New England Public Policy Center, part of the Boston Fed, suggested that Connecticut could save millions of dollars by merging or consolidating emergency call centers, local health districts and local pension administration.

The authors opined that most savings from regionalization will come in technology-based services and those that require specialized skills, not from labor-intensive services.

Here is such an example. About 75-80 percent of school districts in the state use a student software platform called PowerSchool, said Doug Casey, executive director of the state’s Commission on Education Technology. The towns all procure the service independently.

Were there a state master contract to which all could subscribe, it would almost assuredly save towns money.

These could be, say, regional police lockups, perhaps staffed by state corrections officers as prisons are closed. This would free local police officers to work where they are most needed. Public safety dispatch, special education, road maintenance, regional parks such as Riverfront Recapture created along the Connecticut River; there are plenty of possibilities.

When no Connecticut proposal made the first cut for Amazon’s HQ2, Gov. Dannel Malloy observed that the company was looking for large cities, something Connecticut lacks. Indeed, the Fiscal Commission largely agreed with Mayor Bronin:

“In Connecticut, cities are challenged by several structural factors: they are relatively small and lack the ability to grow by annexation, there are no strong regional governments with which they can plan joint projects and share benefits and burdens, and they are uniquely burdened by their concentrations of tax-exempt property. Most importantly, they are saddled with high property taxes that disadvantage them in the competition for businesses and residents.”

This is problematic because young workers are flowing into many large cities. And, said Mark Muro of the Brookings Institution, large metros grow faster than small ones.

Without a large city, Connecticut’s best chance for regional economic development might be dynamic and cohesive regions that act like large cities.

See the first two articles in this series here and here.

The state’s regional councils of government 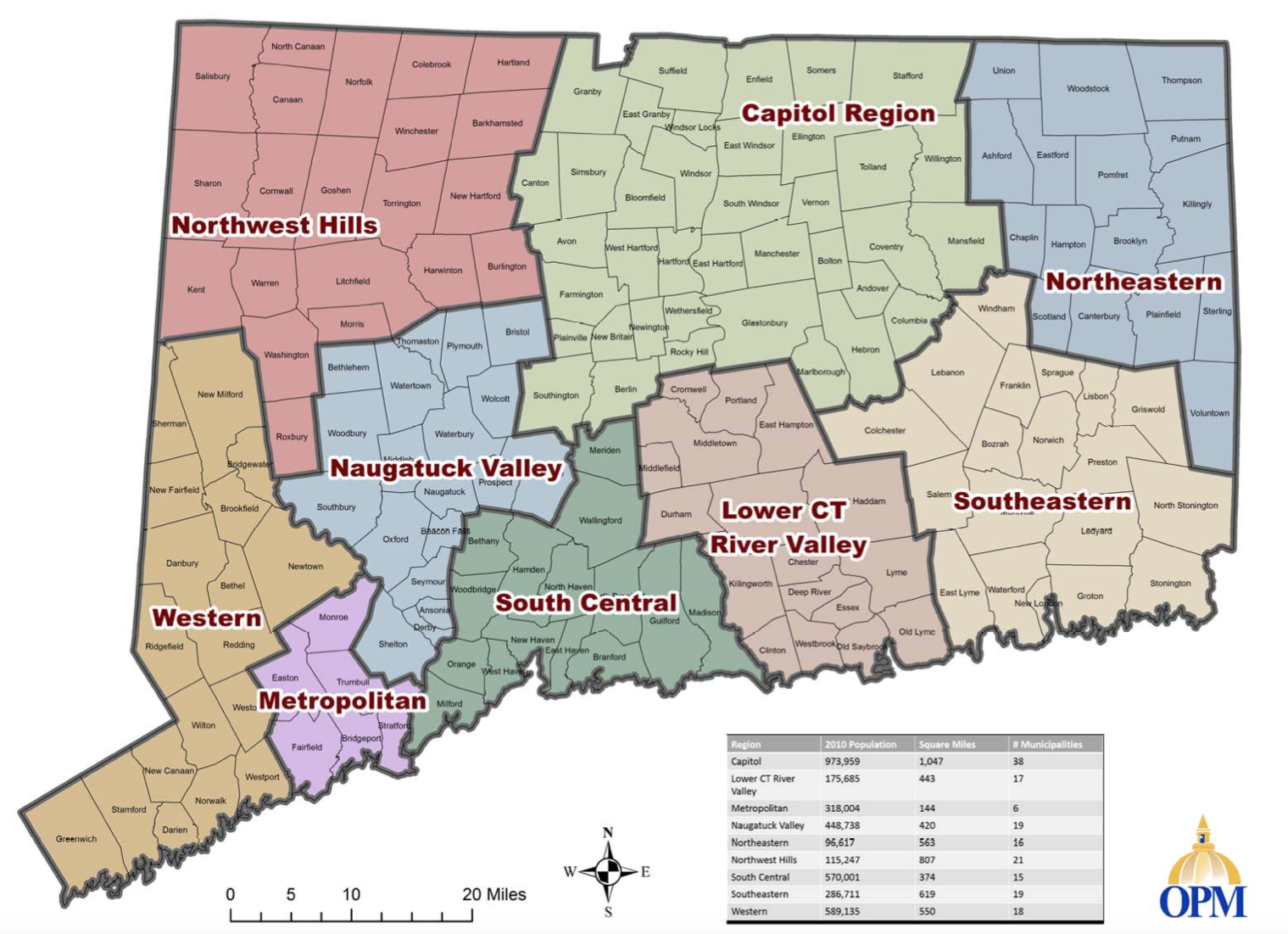