Rubio to introduce ‘red-flag’ bill, as will Blumenthal 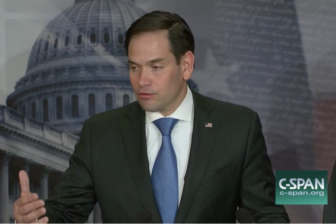 Washington –  Sen. Marco Rubio on Wednesday said he is introducing a bill that would provide federal grants to states for establishing gun violence restraining orders – and said he doubted a broader one Sen. Richard Blumenthal plans to introduce Thursday would pass the Senate.

The issue of removing guns from people who, like Parkland shooter Nikolas Cruz, had raised “red flags”– had indicated they were a danger to themselves or others — has gained support after the massacre of 17 at a Florida high school on Valentine’s Day.

Rubio said his legislation, co-sponsored by Sen. Bill Nelson, D-Fla., would establish a grant program at the Justice Department for states that pass laws allowing family members or law enforcement to petition a court and bar a dangerous person from having guns.

The petitioners could seek a temporary emergency order and then a permanent one.

“It would be a tool,” Rubio said, to prevent “dangerous individuals from being able to take the next step and actually take the lives of innocent people.”

But, he said, his effort, and other gun proposals that have a chance of Senate approval “don’t go as far as people want.”

Connecticut was the first state in the nation to have a “red flag” law. Enacted in 1999 after an employee of the Connecticut Lottery used a knife and gun to kill four bosses, Connecticut’s law allows two law enforcement officers, or one state’s attorney, to petition a court for a firearms restraining order. But it does not allow family members or friends to petition the court, unlike other states that have approved, or are considering, red-flag laws. 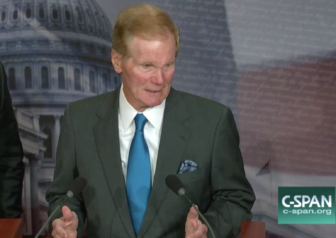 Sen. Bill Nelson discusses his reasons for co-sponsoring the bill.

Five states already have gun violence restraining order laws, and Florida is moving toward approving one.

Blumenthal and Sen. Lindsey Graham are taking a different approach from Rubio and Nelson, and from Rep. Elizabeth Esty, D-5th District, who has introduced a similar red-flag bill in the U.S. House.

Instead of giving grants to states that establish red-flag laws, the Blumenthal-Graham legislation, would establish a federal red-flag law and use federal, not state courts, to seek gun violence restraining orders.

“When law enforcement has solid evidence that someone is in crisis — intensely and imminently a danger — there should be a process for protecting them and the public from the guns they possess or buy,” Blumenthal said.

Rubio and Nelson said they are confident their bill has enough support in the Senate. Nelson said he backs much tougher measures, including legislation that would require universal FBI background checks of gun buyers and an assault weapons ban.

“But we have to be prudent,” he said, noting the influence of the National Rifle Association on members of Congress.

Rubio said the Blumenthal-Graham red flag bill would also face challenges. “I’m not sure that it can get the 60 votes,” he said.

In the Senate, most legislation needs the support of at least 60 senators to avoid being blocked by procedural motions, including the filibuster. That’s derailed several gun control bills in the Senate, including a universal background check bill introduced in response to the Sandy Hook shooting.

Blumenthal and Murphy planned to join other Senate Democrats late Thursday in an unofficial hearing to hear testimony from survivors of gun violence, including students of Parkland’s Marjorie Stoneman Douglas High School.

Also among the witnesses is Francine Wheeler, whose son, Ben Wheeler, was killed during the shooting at Sandy Hook Elementary School.