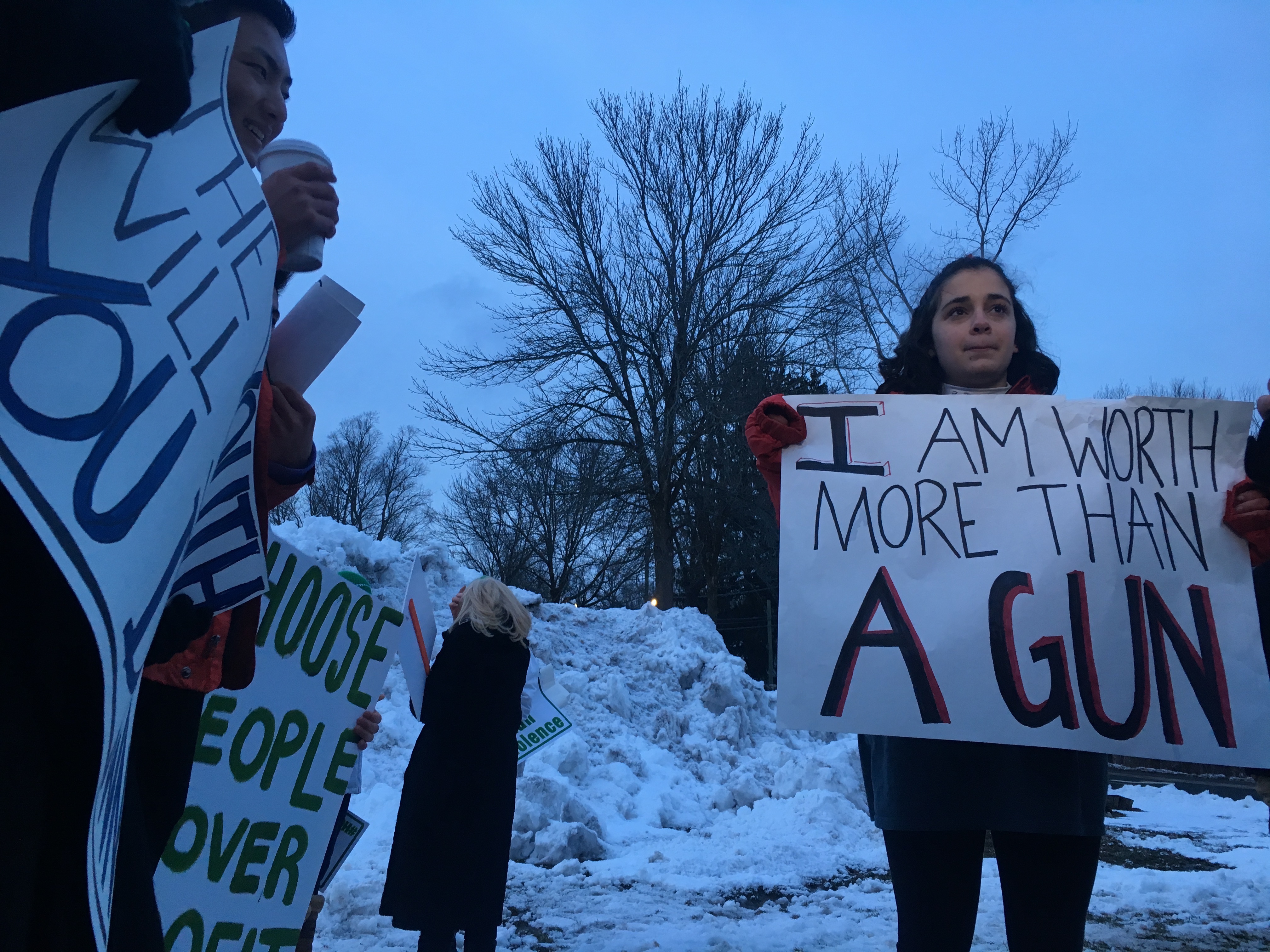 Students in Newtown capped a day of nationwide student protest Wednesday evening outside the offices of the National Shooting Sports Foundation, the trade association for the firearms industry, where they echoed the call for more gun control and an end to gun violence.

Newtown High School students were joined by parents and adults — about 50 people in all — holding signs emblazoned with “#ENOUGH,” “Choose Kids Not Guns,” and “Together We Demand Change.”

Jenny was in sixth grade at Newtown’s Reid Intermediate School when it went on lockdown as a gunman killed 20 first graders and six educators two miles away at Sandy Hook elementary school. The 16-year-old said she remembers comforting a classmate next to her whose sibling was later killed in the massacre.

“Just that feeling that someone you know, it’s indescribable and it’s something that you can never forget. And I just think that no student should ever need to sit in a classroom scared for their lives, especially at a young age — that’s not OK by any means.”

Po Murray, chair of the Newtown Action Alliance, said the walkouts left her with mixed feelings — glad there were so many students engaged, but sad it was prompted by another mass school shooting.

Murray said more people are engaged in the gun control issue today than ever before and that her organization has worked to change the conversation and make the relationship with the NRA “very toxic.”

“Corporations are distancing themselves from the NRA, and we have young people pledging not to vote for politicians who take money from the NRA, so I am hopeful,” Murray said. “I think there will be a pivotal moment when we will be able to see all the Connecticut laws that we passed on a federal level.”

Earlier in the day, thousands of Connecticut students joined youths across the nation in school walkouts to call on Congress to act on gun control measures.

The #Enough National School Walkout, which was run by a branch of the Women’s March group, organized students to participate in 17-minute walkouts one month after a mass shooting at a Parkland, Fla., high school killed 17 people.

The Women’s March Youth Empower counted 3,136 registered walkouts across the country, with more than 50 in Connecticut. Students from Greenwich to Woodstock left their classrooms in protests that included poems, speeches, and songs demanding change.

Meanwhile in Washington, thousands of students from hundreds of schools across the nation, including Connecticut, gathered on the U.S. Capitol grounds and in front of the White House.

In anticipation of the protest at Daniel Hand High School in Madison, Kate Klein, a 16-year-old junior, said she was absolutely fed up with inaction on gun violence and said students are intent that such shootings never happen again.

“I think [the walkout] is incredible; it’s finally relaying that this is going to be it,” Kate said. “It’s motivating to be a part of…we’re finally saying this can’t happen anymore, we can’t suffer these losses anymore … it needs to end.”

The Madison walkout consisted of student speeches, singing the national anthem, and writing letters of condolence to the Parkland attack survivors and to politicians demanding action. 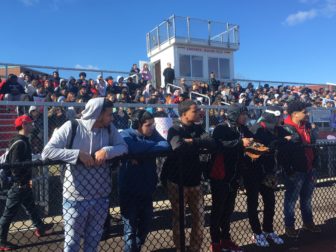 The walkout honoring those who died in the Florida shooting came after the White House on Monday reiterated its backing of a gun purchaser background check bill co-sponsored by Sen. Chris Murphy.

The American Civil Liberties Union put a primer on its site to inform participating students of their rights regarding speech, walkouts and other protests. The quick guide acknowledged the potential for student discipline but said schools can’t “discipline you more harshly because of the political nature of or the message behind your action.”

Grace Ozyck, an 18-year-old senior at Wilbur Cross High School in New Haven, spoke before a sea of students on her school’s football field. Ozyck, who helped organize the walkout, said society has become numb to school shootings and students need to take control of the issue.

Other students read personal poems and speeches calling for tighter gun laws and an end to gun violence.

State Senate President Pro Tem Martin M. Looney, D-New Haven, also addressed the students, encouraging them not to give up and keep the pressure going in the coming months to create change.

“And I think that because of the student demonstrations, the walkouts that are occurring in schools all over the country today, I think we have finally seen what the level of energy, the level of commitment and the level of broad-based public support that is finally going to help us to get legislation nationally and state by state if necessary,” Looney said.

Abby Boyle, a 17-year-old junior at Branford High School, said she heard about the walkout through social media.

“Just from everything that’s happening in Florida and the school shooting, all my friends and I were really upset and kind of angry no one is doing anything about it— so when I saw this online I thought this is perfect, we should do it … we just want to see change. We don’t want to wait around any longer.”

The NRA provided phone numbers for some high school students it said were gun-rights supporters willing to talk to the press about the walkout. One of them, Taylor Truskauskas, a 16-year-old junior from Lewis Mills High School in Burlington, said she wants change but believes it should come though ramped up school safety measures, including improved safety devices and more trained and armed security guards.

Those gathered in front of the Capitol in Washington chanted “do your job” to a Congress that has not approved a substantial gun bill for decades, even after the 2012 slaughter of 20 first graders and six staff members in a hail of bullets at Sandy Hook Elementary School in Newtown. 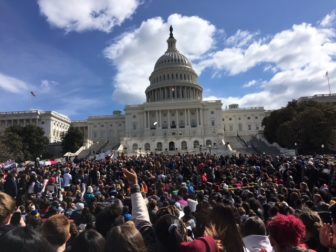 Protesters at the U.S. Capitol.

The students, who also sang “hey, hey, ho, ho the NRA has to go,” want Congress to approve an assault weapons ban, broaden FBI background checks of gun purchasers and take other steps to tighten federal gun laws. President Donald Trump this week backed away from some of the tougher gun control measures the students demand, including raising the minimum age to purchase a rifle to 21.

One by one, a series of Democrats, including Sens. Chris Murphy and Richard Blumenthal and Rep. Elizabeth Esty, D-5th District, addressed the youth on the Capitol lawn.

Murphy said that on Tuesday his 6-year-old son had to undergo an active shooter drill in his kindergarten class. “That should never happen in the United States of America,” Murphy said.

He asked the students, “Are you prepared to defeat the gun lobby?” and received a rousing response in the affirmative.

Like other lawmakers, Murphy made a point of telling the students their movement was special, if not unique. “There is no great social change movement in America that is not led by the youth of America,” he said.

Blumenthal told the students “if it were up to me, you would all get an “A.”

“I have never felt as close to victory as we are today, because of you,” Blumenthal said.

Esty said she wore green in memory of the Sandy Hook victims.

An even larger rally by students demanding new gun laws, the March for Our Lives, has been scheduled in Washington and other cities for March 24.

Lane Murdock, a Ridgefield High School sophomore, has created another national school walkout set for April 20, the 19th anniversary of the Columbine school massacre in Colorado. The 15-year-old said students at 1,677 schools in almost every state have signed up for her event. Wednesday’s protests are a buildup for the March for Our Lives event and her own, she said. 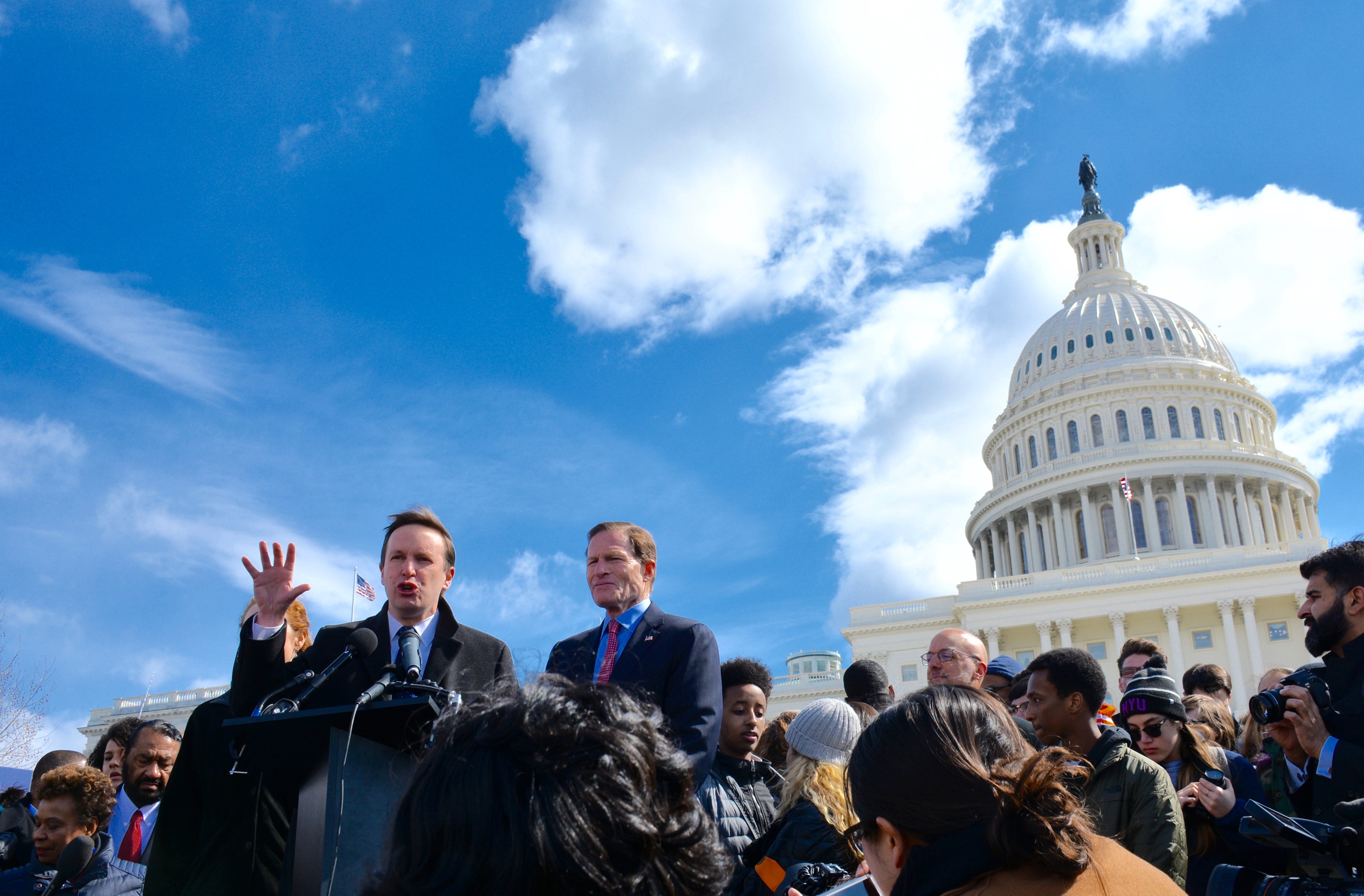 This story was updated at 8:45 p.m. with a report from Newtown.