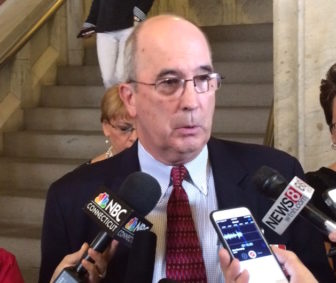 Connecticut’s business leaders offered much praise but were more cautious with their support when it came to the recommendations of the state’s Commission on Fiscal Stability and Economic Growth.

After hearing an appeal Friday from the panel’s co-chairs — two recently retired, longtime business execs — to help them back all commission recommendations as a package, the Connecticut Business and Industry Association declined to do so — for now.

“We’ve got, as you know, a very broad and diverse membership,” Brennan said after the commission’s co-chairs, Robert Patricelli and Jim Smith, outlined their panel’s recommendations to more than 250 business leaders at the annual Business Day forum in the Legislative Office Building. “They are impacted in a lot of different ways. This (report) needs a lot of analysis by us.”

Brennan said the CBIA agrees with “most of the report,” and praised the 14-member volunteer commission for developing a path to lead state government and the economy through one of their toughest challenges in modern history.

The commission should receive plenty of support, he said, for its proposals to:

But Patricelli and Smith said those proposals are designed to work in tandem with other key recommendations.

Because Connecticut has almost $80 billion in long-term obligations — dominated by pension and other retirement benefit programs poorly funded for decades — it can’t afford to reduce and eliminate some taxes without raising revenue elsewhere, the commission says.

“The business community needs to come together around this report,” Patricelli said, calling it a “holistic set of proposals” and a “comprehensive attack on Connecticut’s problems.”

Smith conceded that “there is something in here for everybody not to like so much,” but added that Connecticut cannot afford to do nothing.

The commission recommended raising the sales tax rate from 6.35 percent to 7.25 percent, and boosting annual corporation tax payments by $475 million.

It also would eliminate $750 million per year in annual tax credits and exemptions, probably chiefly affecting sales tax breaks though it also could impact corporation taxpayers.

To pay for the transportation improvements, the commission endorsed electronic tolls on highways and adding seven cents to Connecticut’s 25-cents-per-gallon retail gasoline tax.

“Certainly around tolls it is premature for us to say we are going to endorse the plan,” Brennan said. “Same thing with a gas tax increase.”

The CBIA chief called the corporation tax hike “a major, major increase on companies that are already here and operating,” though he acknowledged many other businesses which pay taxes through their principals’ personal income tax return would benefit.

So could the CBIA give the commission the full endorsement of major points as Patricelli and Smith requested?

“At this time? No,” Brennan said, adding that the association would continue to assess the report.

Leaders of two of the three regional chambers of commerce interviewed by The Mirror on Friday expressed similar sentiments.

Former Waterford First Selectman Tony Sheridan, president and CEO of the Chamber of Commerce of Eastern Connecticut, said the proposed corporation tax increase could be a major concern for two of the region’s chief employers. 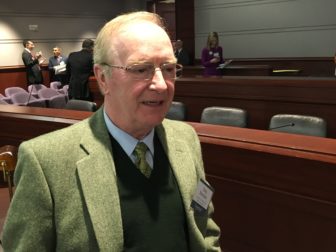 Tony Sheridan, president and CEO of the Chamber of Commerce of Eastern Connecticut

“I’m very concerned about organizations like (General Dynamics’) Electric Boat and Pfizer Corp,” he said. “That’s a huge hit. How do they make up for that? That’s a big question for us.”

Sheridan praised the panel for recommending greater transportation spending, adding that his group would continue to analyze the commission report.

“One of the problems we have right now is we have seen no alternatives,” he said, adding that Connecticut still needs a strategy to increase economic growth. “We may very well have to embrace it.”

Lynn Ward, who heads the Waterbury Regional Chamber of Commerce, couldn’t say her chamber’s governing board would back the plan — right now.

But she quickly added that “it’s the only proposal out there that looks like there is a solution in the long-term.”

Ward also said, “I put a lot of confidence in the report because of the people who worked very hard on the commission” and because the business community had “a serious voice” in the final process.

But JoAnn Ryan, president and CEO of the Northwest Connecticut Chamber of Commerce, said she could back the commission’s full report immediately.

I’m so impressed with the committee, their goals, what they have come up with,” she said. “And it’s about time that we all worked together, taking the hard road but doing what we need to do to get this state moving forward.”

Gov. Dannel P. Malloy, who like legislative leaders was reserved in his comments when the bipartisan panel submitted its report on March 1, was very supportive of the report on Friday during his Business Day remarks.

Malloy particularly praised the commission for backing his call for a major transportation investment, and the installation of electronic tolling and other measures needed to pay for them.

“The reality is we need to make investments in transportation,” he said, adding Connecticut has ignored its infrastructure because politics has been dominated by those seeking immediate returns. “If we get transportation right, it doesn’t pay an immediate benefit. … Government and politics are filled with people who don’t want to make long-term” decisions.