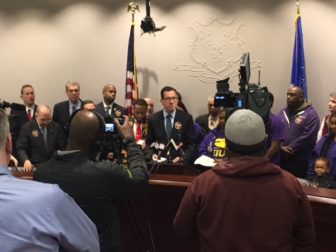 Gov. Dannel P. Malloy and a bipartisan group of state lawmakers voice their support for a proposed contract for 8,500 home care workers.

A bipartisan coalition of Connecticut lawmakers and the governor voiced support Tuesday for a proposed contract that will raise wages, provide workers’ compensation and increase training programs for about 8,500 home-care workers.

The House and Senate are scheduled to vote on the contract Wednesday, which would increase wages to $16.25 per hour by 2020. Most home care workers earn $13.53 per hour, according to SEIU 1199 New England, the union that represents the home care workers. The proposed contract is retroactive, effective Jan. 1, 2016 to June 30, 2021.

The workers care for elderly and disabled state residents in their homes, including helping them with dressing, bathing, personal hygiene, cooking, grocery shopping and transportation. They are funded through the state departments of Social Services and Developmental Services under programs such as Medicaid.

“The first agreement, and now in the second agreement, which is before the legislature and hopefully will be passed shortly, is really about preparing our state for an aging population,” said Gov. Dannel P. Malloy at a press conference at the Legislative Office Building. “The reality is wages just a few years ago were so low that people were leaving the field and not coming into it.”

When asked about the significance of the Senate Democratic and Republican leadership attending the press conference, Malloy said, “I think it’s a sign of the fact that the objections that were made when I originally proposed the legislation that allowed this to happen were ill-founded. And the reality is there is a greater understanding that stability in the marketplace for home care is extremely important to keeping our costs lower, not higher.”

“It makes me feel great that I can do all the things for my clients that we take for granted, but people with disabilities may not be able to do themselves,” said Pearson at the press conference. “However, there are a lot of problems in this field. I take care of the safety of another person, but without workers’ compensation, I stress every day about my own safety and my own security if I got hurt.

“This contract will allow me to stop making tough choices, like paying rent or buying groceries,” she said.

Jennifer Klein, a Yale University professor, said home care is one of the fastest-growing occupations in the nation because of the aging population and the fact that these jobs can’t be offshored.

“We will know what kind of support it has then,” O’Neil said.

In a statement, House Speaker Joe Aresimowicz, D-Berlin, said he was confident the proposal would pass the House on Wednesday.

“We are talking about low wage workers with the enormous responsibility of caring for our loved ones, who are also saving taxpayers millions of dollars by helping people stay in their homes,” he said.