Towns told to make up for state education cuts 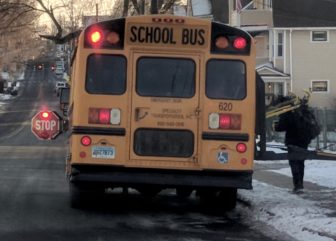 Shortly after the governor imposed $58 million in midyear cuts to state education aid for 130 communities last November, the state informed superintendents their districts would lose even more state funding if they compensated by cutting their own budgets by more than the administration has determined the law allows.

Now the administration of Gov. Dannel P. Malloy has told six communities they are facing penalties for cutting too much. The penalty is twice the amount of the cut deemed excessive.

The towns that have been notified are:

More districts are not being threatened with penalties because local spending was already on pace to make up for the cut or because local leaders scrambled and found more local funding after being told they would be required to spend more.

The state education department says it is confident the six districts notified of penalties eventually will comply.

This administration’s decision to force local governments to make up for midyear state education cuts is prompting criticism from top state lawmakers.

“In order to fully comply with the leaders’ true intentions in this [budget] bill to have the MBR be based on money actually received by municipalities, not theoretically allotted, we are writing to ask that you exercise your authority,” wrote Senate President Pro Tempore Martin Looney, Senate Republican leader Len Fasano and House Republican leader Themis Klarides.

The state board’s next meeting is scheduled for April 4, and so far has no plans to take up the issue because no towns have requested a waiver from the minimum spending requirements. Malloy, a Democrat, generally does not support allowing towns to reduce spending on education.

“I think that’s a misguided effort on the legislators’ part, but they get to write letters and say things that they want to say,” he told reporters last week. “In difficult times, difficult decisions need to be made, and that’s a local decision, but we have a state law that requires minimum expenditures.”

State law does allow towns to cut spending between 1.5 and 3 percent from year to year if enrollment declines, a school closes or a district can document savings to the education department. Also, reductions in the state’s primary education grant – the Education Cost Sharing grant – can allow a corresponding cut from a town’s education budget.

However, the administration believes the $58 million in midyear cuts – called holdbacks – aren’t technically cuts because the funding is only being held back in anticipation of deficits and is not formally considered a cut until the fiscal year ends June 30.

Legislative leaders took issue with Malloy’s targeting of education aid for the holdbacks, but the adopted budget required him to cut a total of $880 million from the state budget without telling him where. That left him with few choices since education aid makes up such a large share of the state spending and so many areas of the budget are off limits because they are locked in by contracts.

Legislative leaders have had four months since Malloy announced the midyear education cuts to pass legislation to restore the funding and make cuts elsewhere.

“This is penalizing towns that have done everything right – worked hard to reduce local budget expenditures and control property tax levels to protect taxpayers,” she wrote. “Despite these efforts, they are now being penalized.”

Peter Yazbak, a spokesman for the education department, said it is working with school districts to comply with the spending requirements, and that three of the six districts have informed the department that additional local funding will be provided to comply.

“We are working with the other three communities, and are confident they will also reach a resolution,” he said.